16 year old singer-songwriter Kylie Spence is thrilled to release her debut single “Lying Eyes” today. The track was premiered yesterday, Oct. 9th, with Artist Direct, who wrote, “The track has a timeless quality about it.” The video is a look at relationships told through the eyes of a teen with an old soul. Kylie wrote the lyrics and music to the song and it was shot with the sleepy, desert-y feel of California cool up to and including a very rad Mustang convertible with hanging dice to complete the look. 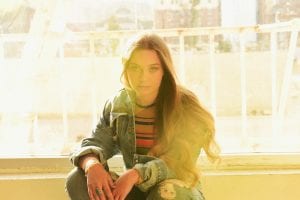 “Lying Eyes,” is a moody, alternative pop hit that explores the dark depths of being in a tumultuous relationship. Backed by a staccato guitar strum, Kylie’s crisp, yet emotive vocals hit you with such power and conviction that it’s shocking she only just turned 16. The track utilizes a mixture of modern and vintage instruments, like a mellotron, wurlitzer, and harmonium, to give it a sharp, but warm and tangible sound that gives you visions of the California desert that are so perfectly captured in the video. In just two months, “Lying Eyes” has accumulated over 145,000 Spotify streams and it hit iTunes’ Hot Tracks chart in July.

Kylie Spence wrote and recorded her first song when she was only 12 years old and, from then on, she’s been hooked. She quickly recognized the power in using her voice to give her lyrics a deeper meaning and eagerly began refining her skills in piano, guitar, and ukulele to assist in her recording endeavors. Shortly after discovering this drive for performing, Kylie was hit with an autoimmune disorder and found herself unable to sing due to her respiratory health condition. So, instead of singing, she wrote.

Kylie holed herself up in her music room for the better part of a year and wrote song after song. Now 16, the Laguna Beach artist has turned these songwriting sessions into a daring debut EP. Touching on topics well beyond her years, Kylie views the world with a deep sense of empathy and is able to draw inspiration from her own experiences, familiar personal struggles, and the world around her. Kylie will be continue releasing new music throughout 2017, with an EP due early 2018.