“The Royal Oui have outdone themselves with their latest self-titled album.”   – Aquarian Weekly

“The Royal Oui is too cute for words.”  – KAMP Radio

In a recent press release, it was announced that Vancouver’s The Royal Oui (Ari Shine and Adrienne Pierce) released their anticpated self-titled, full-length debut earlier this week and will be streaming the entire album on their label’s site, File: Under Music!  The 11-track album premiered earlier last week at Alt Sounds and has already been receiving incredible reviews. Ground Control Magazine ran a review in December and raved, “On their self-titled debut album The Royal Oui effortlessly presents love and conflict in their songwriting because it is a part of who they are as a team; it wouldn’t be the same at all if they weren’t together and the efforts of these songwriters as individuals probably wouldn’t be as good, but they rule the world together for the thirty-eight minutes it takes to play though this album.”

The Royal Oui kicked off the release this past November with The Vinyl District’s premiere of their first single, “True.” On the track the couple sing, “And you’ll say that it’s easy to say but believe me it’s not,” and yet over the eleven songs of The Royal Oui the duo find the words, harmonies and textures to charm the listener through the good, difficult and the changing times that go into growing a relationship. Magnet Magazine said it best, “Husband-and-wife team Ari Shine and Adrienne Pierce are creating unique jams as The Royal Oui.” The duo followed up the release of the single with a beautifully made video, shot on the North Shore of Vancouver and directed by Austin Muirhead. Impose Magazine premiered the video last week and claimed, “If you’re single, this video will probably beat your heart over the head.”

The Royal Oui follows the duo’s debut EP, Forecast which was released on October 8, 2013.  The EP served as a teaser for the full-length and included one of the tracks on the album, “When You Lose Your Mind” which was featured on American Songwriter.  Shortly after that feature, Rolling Stone premiered and offered fans a free download of the B-side “Actual Size.”  Ari and Adrienne will be touring in support of the album and have already confirmed a bunch of tour dates up and down the west coast. They celebrate the release with a show at the Triple Door in Seattle on 2/11 and will  hit San Francisco, San Jose,  Los Angeles, Portland and more. All tour dates are listed below. 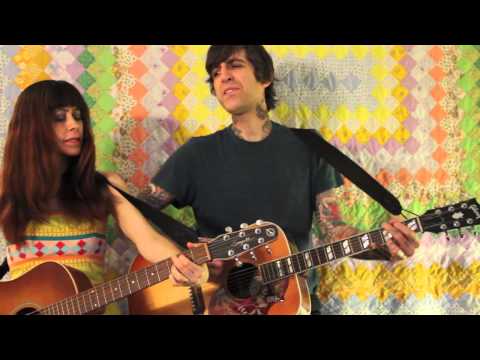 “Their first 7-inch, ‘When You Lose Your Mind’ (b/w ‘Actual Size’),
displays not only their quirky sensibilities but their admirable restraint. And that opening lyric is a keeper.”
– BuzzBands.LA