St. Vincent – aka Annie Clark – has announced her new album, ‘MASSEDUCTION,’ to be released October 13 on Loma Vista Recordings. Themes of power and sex, imperiled relationships and death slice through the album, Clark’s first since her 2014 breakout ‘St. Vincent.’ The thirteen tracks on ‘MASSEDUCTION’ swirl with guitar and piano, synths and strings, and drum beats that punch with purpose. The album was co-produced by St. Vincent and Jack Antonoff at Electric Lady Studios in Manhattan, with additional recording at Rough Consumer Studio in Brooklyn, and Compound Fracture in Los Angeles.

“Every record I make has an archetype,” says Clark. “‘Strange Mercy’ was Housewives on Pills. ‘St. Vincent’ was Near-Future Cult Leader. ‘MASSEDUCTION’ is different, it’s pretty first person. You can’t fact-check it, but if you want to know about my life, listen to this record.”

Clark is hosting a live press conference on ‘MASSEDUCTION’ beginning at 9AM EST today on Facebook Live: http://found.ee/StV_FB-i

Clark has also released a new song from the album today. Listen to “Los Ageless” at 9AM EST here: 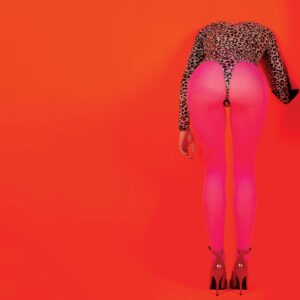 ‘MASSEDUCTION’ is the culmination of years of writing, with songs crafted from voice memos, text messages, and snippets of melodies that came to Clark while traveling the globe. Special guests on the album include Thomas Bartlett on piano, Kamasi Washington on saxophone, Jenny Lewis on vocals, and beat production from Sounwave. Greg Leisz and Rich Hinman add pedal steel, and Tuck and Patti Andress contribute guitar and vocals respectively on select tracks.

As previously announced, St. Vincent’s “Fear The Future Tour” will launch October 7th with a special performance to take place on the Paramount Pictures Studio “New York street” set as part of the Red Bull Music Academy Festival. Full list of dates below.

St. Vincent’s 2014 self-titled album was her best-reviewed and best-selling to date, topping many year-end lists and culminating in her first GRAMMY® nomination and win for Best Alternative Music Album in 2015. Shortly after the album’s release Clark performed with a re-formed Nirvana at the 2014 Rock & Roll Hall of Fame Induction Ceremony and on the 2014 season finale of Saturday Night Live. In 2015 Clark won the ASCAP Vanguard Award and she was 2017’s Record Store Day Ambassador. 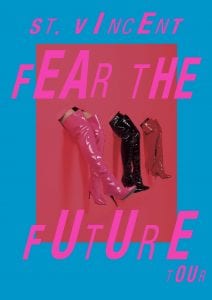 Ticketholders to US shows (other than Detroit, Indianapolis and Boston) will automatically receive a digital download of the album on October 13.