Educational panels, special events, and over 700 performances by iconic musicians across generations, as well as rising talent, was enjoyed by over 50,000 attendees, as estimated by The Americana Music Association.

Sheryl Crow kicked off the week at the Cannery Ballroom with ‘Sheryl Crow & Friends’ performing some of her classic hits a well as songs from her new album Threads. Her 11th studio album, Crow has said Threads will possibly be her final album. What a treat to have her joined on stage by Bonnie Raitt and Jade Bird.

Bringing home the Artist of the Year trophy at the 18th Annual Americana Honors & Awards, she was up against some very talented artists — Kacey Musgraves, Mavis Staples, and Rhiannon Giddens. Not only an award recipient, she sat on a panel with Tracey Gerson of Change the Conversation to discuss the inequality of representation of women in the music industry and steps to take to not only “change the conversation,” but to see results. And that begins with her own actions. She also discussed producing Tanya Tucker’s new album, While I’m Livin’, as well as working with the Secret Sisters on their new album.

It was recently announced that Carlile will be honored with the coveted Trailblazer award by Billboard at their annual Women In Music event taking place December 12 at L.A.’s Hollywood Palladium.

The Year of Yola

The Queen of Country Soul, Yola has had a tremendously successful year. The British artist released her debut album Walk Through Fire in February to critical acclaim. The album was produced by Black Keys’ Dan Auerbach’s Easy Eye Sound label.

Yola’s sightings at AMERICANAFEST included performances at the awards ceremony, at City Winery where she brought down the house, on the General Jackson Showboat, and a one-on-one interview with Chris Shiflett of Walking The Floor podcast.

Yola received four nominations for the 62nd Grammy Awards including Best New Artist and three nominations in the Roots category including Best American Roots Song, Best American Roots Performance (for “Faraway Look”) and Best Americana Album for Walk Through Fire. She’s heading out on a massive tour in 2020, so check to see if she’s be coming to a town near you. Also, joining her on some of her tour dates is Americana artist Amythyst Kiah featured in this edition. 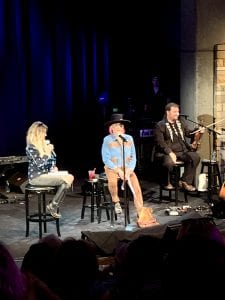 Tanya was another artist very visible at this year’s AMERICANAFEST with multiple performances at various venues throughout Nashville. Not only performing and appearing at the awards ceremony to honor the producer of her new album, Tucker held a one-on-one interview with Elizabeth Cook, host of Sirius XM’s Outlaw Country channel’s show Apron Strings, at the Country Music Hall of Fame and Museum. During the interview, Tucker discussed her career, working with Carlile, and even delighted fans with performing “Bring My Flowers Now.” Goosebumps!

Another outstanding event held in partnership with the Country Music Hall of Fame and Museum was the “Turning The Tables” session. Moderated by NPR Music’s Ann Powers, attendees heard from Maria Muldaur, Carlene Carter, Shawn Colvin, and Amythyst Kiah as these artists spoke of their musical influences. Muldaur was celebrating her birthday that day and discussed being inspired by Bessie Smith and Memphis Minnie, and her beginning in music with Victoria Spivey. Carter shared stories of the Carter Family, Colvin shared a funny story about getting love advice from Joni Mitchell, and Kiah was on the panel representing the future of music. Each performed a song, but the icing on the cake was Carlene Carter singing “Foggy Mountain Top.”

Speaking of Shawn Colvin, her album Steady On is celebrating its 30-year anniversary this year, and she performed the entire album at the City Winery. In 1991, Steady On won a Grammy for Best Contemporary Folk Album.

Jade Bird: Breaking Through the Noise

U.K. singer-songwriter Jade Bird sat on a panel this year with Glassnote Records President and Founder, Daniel Glass, to discuss the importance of artist relations and finding the right fit. We spoke with Bird after the panel to get her advice for aspiring female musicians. She said, “Make sure you know your boundaries 100 percent because you should never feel intimidated by anyone. You never want to have a conversation you don’t want to have. When you don’t feel comfortable, you are totally within your right to leave a conversation. Also, be aware of what you want to say and clarify that as much as possible before anybody gets involved so no one can manipulate you.”

Songs of Our Native Daughters artists Rhiannon Giddens and Amythyst Kiah both had standout moments this year. Both performed at the awards show, sat on panels, and Giddens joined Kiah onstage during her showcase at The Station Inn. Giddens and writer John Jeremiah Sullivan held a powerful, moving discussion on the “Erasure of American Music History.” As mentioned earlier, Kiah was present at the “Turning The Tables” event discussing her influences and background in music.

Performances hosted by NPR Music, World Café, and WMOT were held at the War Memorial Auditorium. The intimate setting and beautiful architecture of the auditorium created a wonderful backdrop for these performances.

We were able to catch a few of our favorite artists to include Tanya Tucker, Aubrie Sellers,  Shawn Colvin, Della Mae, Molly Tuttle, and Rising Appalachia.