Instrumental surf with its fast tremolo picking, rolling drums, and heavy reverb had a sonic vibe all its own. The Ventures made waves with the iconic song “Pipeline” and Dick Dale’s reverb-drenched riffs took instrumental surf to new heights.

“What I was trying to do was actually capture the sound of being out in the ocean,” Dale told the Baltimore Sun in 1993. “When I’d be out there surfing, I could feel this thunderous sound. When I started banging on my guitar, I was trying to emulate that same sound – that fat, thick sound.”

Dale gravitated toward Fenders, which were manufactured not far from the beach in the company’s Fullerton, CA factory.

Guitarist Kathy Marshall, known as “the Queen of the Surf Guitar,” played a Stratocaster as well as a Jazzmaster. She sat in with several groups, including Eddie and the Showmen, the Blazers, and the Crossfires. Legend has it she even jammed with Dick Dale. Scant recordings of her playing exist, but she’s distinguished for her stage style and picking technique.

Early on, The Ventures used Fenders but later played Mosrite guitars by the California manufacturer. That connection was short-lived, but still, many associate the group with Mosrite since they released a few Ventures models. 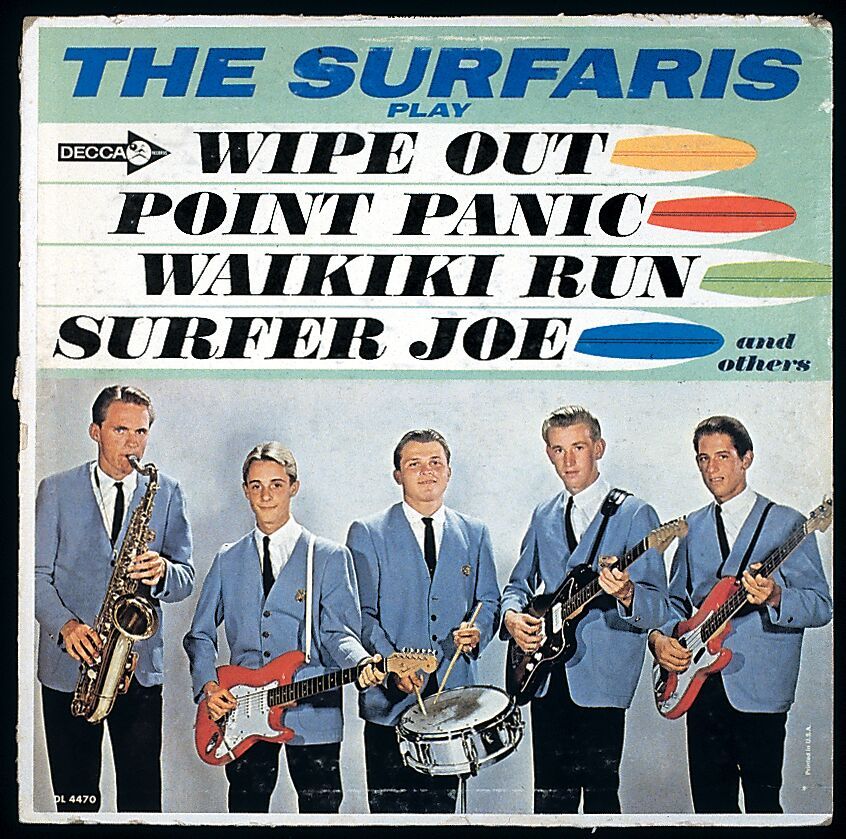 In later years, surf rock resurged with the movie Pulp Fiction; and popular guitars of the day became retro-cool finds. Surf rock’s influence can be heard in the Go-Go’s music and U-2’s The Edge.

Today, beach music is still going strong with bands The Surfrajettes, among others.

A host of colorful and offset guitars enhanced the sound and imagery of the surf rock genre. 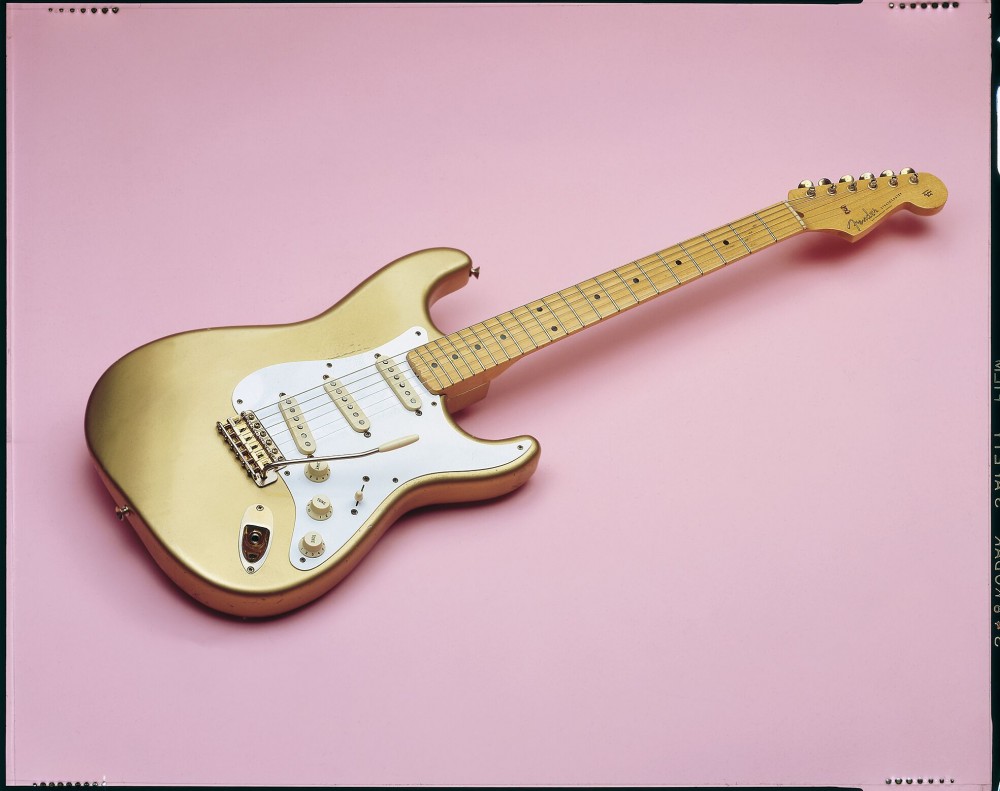 Launched in 1954, the Stratocaster looked like no other guitar at the time. It had a smooth, contoured body and designed with the player’s comfort in mind, as opposed to the chunkier Telecaster.

A solid-body electric, the Strat housed three pickups, a built-in vibrato unit, and was the ultimate guitar for creating chordal effects.

This new breed of guitar came in colors like Sonic Blue and Burgundy Mist, which appealed to the SoCal car and beach culture. The Strat’s production mirrored the contemporary automobile designs and aesthetics of the ‘50s and ‘60s. With sleek curves, a proportioned body, and chrome details, the Strat looked as good as it sounded. To this day, the guitar is famously used for almost any style of music.

As far as the Stratocaster, there was none more infamous than Dick Dale’s gold axe known as “The Beast.” Dale needed durable equipment, and a Strat was the perfect vehicle for the guitarist’s rapid-fire playing and distinctive tone. He strung The Beast with a combination of wound and unwound strings and preferred a heavy-gauge pick for his aggressive attack.

The Stratocaster was also the go-to for many other surf players looking for a versatile, stand out guitar. 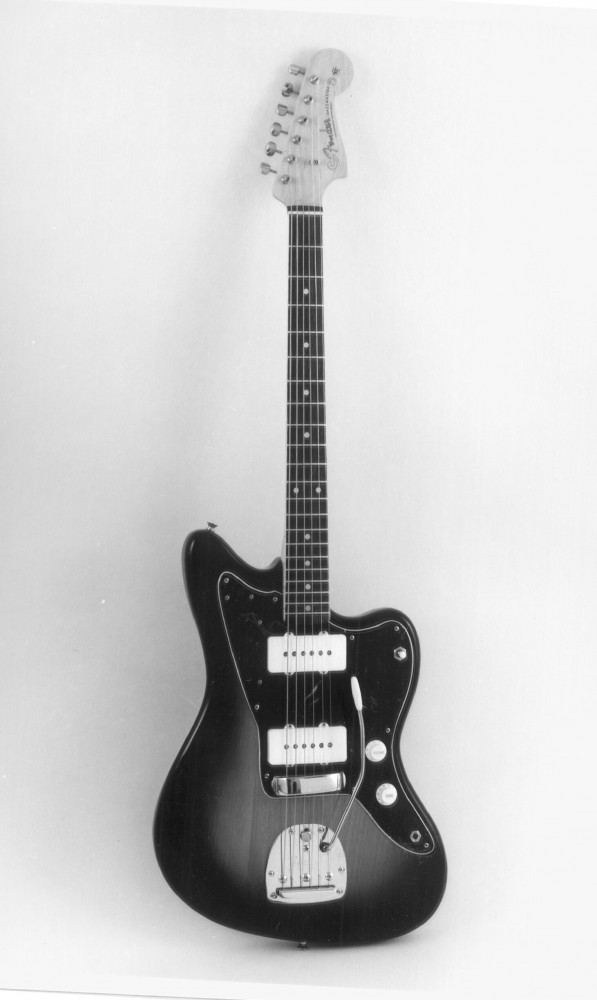 In an effort to expand the scope and appeal of their lineup, Fender introduced the Jazzmaster at 1958’s NAMM show. Touted as “America’s finest electric guitar,” its offset-body sported an updated vibrato system and cost $50 more than a Stratocaster at the time.

The space-age beauty, designed by Leo Fender, was first marketed as an upscale guitar for jazz players. Made to produce a rich, warm sound, the Jazz came with new features as well. The guitar had two, plastic-covered soapbar pickups, a rhythm/lead circuit slider, as well as a floating tremolo system – a feature that intrigued surf guitarists whose pitch-bending mimicked the sound of ocean waves.

Jazzmasters were produced in cool colors, and some had block-shaped fingerboard inlays. A Jazz in Standard Sunburst finish was released in 1959, the decidedly surfer-friendly Foam Green debuted in 1963, and the Blue Ice Metallic was bright, but yellow fading overtime turned it a greenish hue.

Overall, jazz players hadn’t embraced the Jazzmaster as expected, and die-hard Strat and Tele players didn’t sway either. But as fate would have it, the guitar eventually won acceptance by the surf rock community. In later years, the Jazz made a comeback with punk and indie-rock bands like Sonic Youth and Nirvana. 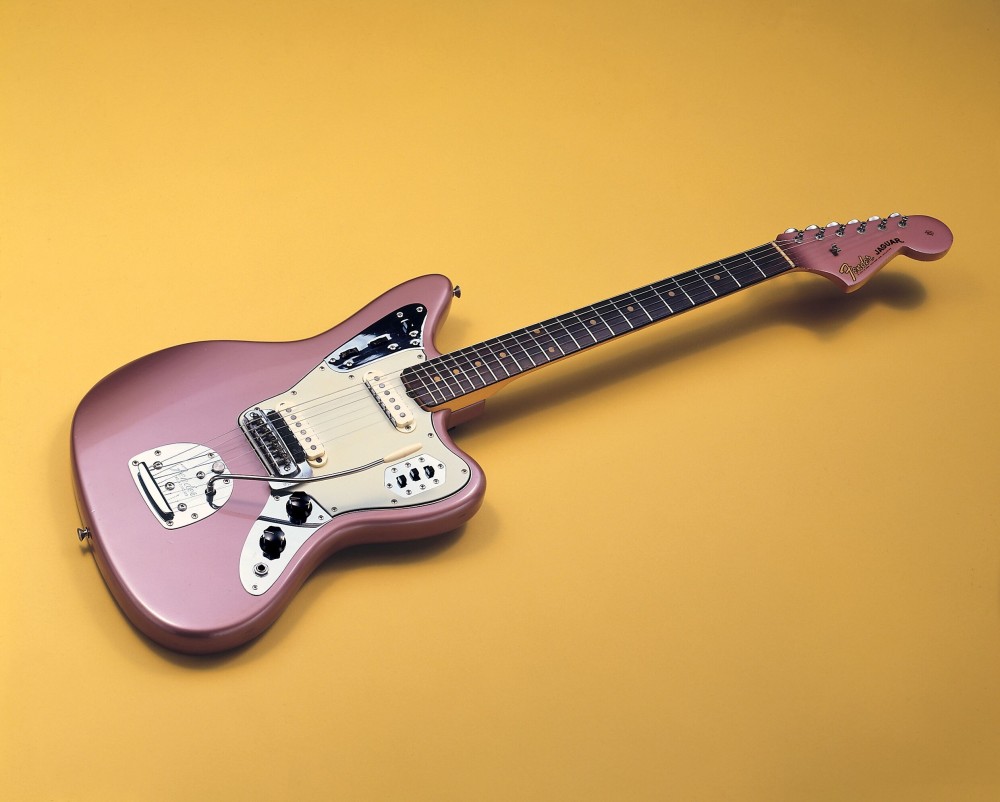 The versatile Jaguar rolled out in 1962 with three distinctive chrome-plated control panels and an offset body. Its short-scale neck and unique switching system proved a great choice for players on the surf scene.

With its shorter scale neck (24”), the Jag was built for fast playing. It had different pickups than the Jazzmaster, which rocked wide, single-coil pickups that were unshielded and hummed a bit. The Jaguar had two narrow, single-coil pickups (more like those on a Strat) that were encased in notched metal rings (or claws), that reduced hum – an addition not typical on Fenders but was seen on a ‘60s Bass VI.

Although the Jag and the Jazz both had dual-circuitry (lead and rhythm), the Jaguar’s lead circuit was more involved. It had three slide switches on the lower horn. The first two were on-off switches for each pickup; the third triggered a capacitor that filtered out the low-end for a trebly tone, which some dubbed the “strangle” switch.

Features saw the floating tremolo, a spring-loaded string mute at the bridge. However, most players preferred muting the strings naturally with their hands. The Jag was also the first Fender with 22 frets on the fingerboard.

On the early Beach Boys records, Carl Wilson played a Jaguar. He later played Stratocasters, Guilds, and Gibsons. Other guitarists picked up a Jaguar such as Mary Kay, Eddie Bertrand, PJ Harvey, and Dave Myers.

The Jaguar was discontinued in 1975. Fortunately, Fender has created many classic reissues of its early instruments. Still, with a unique design and a personality all its own, the Jag has held up well among its Fender family.

Other Notables on the Surf

Guitars produced by Semie Moseley were known for their innovative designs and high-quality. There were several Mosrites referred to as the “Ventures model” guitars, later known as Mark I. The Ventures model had a slim neck, microdot inlays, and an angled neck pickup. The ultra-cool guitars were made at the company’s factory in Bakersfield, CA. Punk rocker Johnny Ramone would later play one.

The American manufacturer based in New Jersey put out many fine guitars suited for new players such as the Silvertone.

The Danelectro Slimline had a jaguar-style shape, vinyl side-trim, and a stumpy headstock. It came with two or three pickups and was offered with or without vibrato. Their Hawk line of guitars were similar as well. The Danelectro Hawk (mid-’60s) had a short scale and was designed without the side-trim. Powder blue and other funky colors and finishes like alligator and crackle were very trendy.

Guitar Term Tip
The terms vibrato bar, tremolo bar, and whammy bar are all used synonymously, as well as the words bar and arm.