While the heavy metal and hard rock music scene has typically been male-dominated, there have been women who have dotted this landscape who were and are like a comet – they’re a rarity not often seen, but when they are, they’re brilliant. Here is a list of just a few of the women guitarists who played heavy metal and hard rock just as fast and loud, if not louder, than any of the men did. 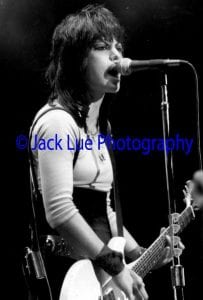 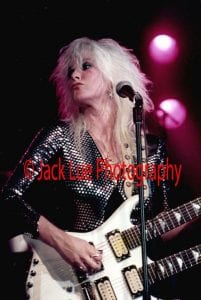 While not necessarily put in the box of heavy metal, The Runaways were one of the first hard-rocking all-female bands to define the genre – rebellious, in-your-face attitude, and loud, snarling sound that sounds best when turned up to 11. On guitar, the Runaways featured Joan Jett and Lita Ford, two standouts who would become famous in their own right – the latter of whom bookends this list of the most famous ladies of metal.

The all-female ‘80s glam metal band, Vixen, originally formed in 1974 by Jan Kuehnemund while she was in high school. After that incarnation broke up, she reformed the group in 1980 but the classic lineup that would become known as the “female Bon Jovi” didn’t come together until the mid-‘80s and featured Kuehnemund, Janet Gardner, Roxy Petrucci, and Share Pederson. Current guitarist for Vixen, Britt Lightning, is interviewed in this issue, so check out what is new with Vixen via her interview.

The London based, all-female outfit, Girlschool, were glam ten years before glam metal was a thing. They formed in the late 1970s but found the bulk of their success in Europe in the ‘80s. They were known for their live shows, and once they got the attention of Motörhead’s Lemmy Kilmister, they became known as longtime collaborators and openers for Motörhead, as well. Girlschool still shreds today, making them the longest-running all-female band.

Another all-female metal band from the ‘80s is Precious Metal. Guitarist Janet Robin learned to play guitar from Ozzy Osbourne’s guitar player, Randy Rhoads, literally. He gave her guitar lessons when she was a kid, and by high school, she was Precious Metal’s lead guitarist. Now, she’s recognized as one of the Top 10 Female Guitarists by a popular guitar magazine. She’s played with Lindsey Buckingham, June Carter Cash, and written for Heart and Cheap Trick. 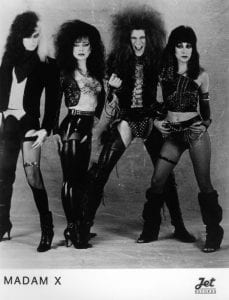 Madam X were perhaps the quintessential hair metal band on the Los Angeles rock scene in the ‘80s. Founded by sisters Roxy (of later Vixen fame) and Maxine Petrucci, Madam X garnered the attention of Rob Halford from Judas Priest who mentored the group early on. Guitarist Maxine Petrucci was a self-taught shredder after teachers repeatedly told her girls couldn’t play rock music. She still rocks today as a solo artist and has a right-hand picking style that’s been labeled “the hummingbird effect” because it’s so fast, furious, and to the point.

Known for blending classical pieces by the likes of Beethoven, Vivaldi, and William Tell, with her own brand of speed metal, the Great Kat is a guitar virtuoso with a background in classical music and a persona rooted in S&M. She graduated from Julliard in the late 1980s and toured playing classical violin pieces for a time until she decided to transition to guitar and meld her love of classical music with speed metal. Dubbing herself the “High Priestess of Shred Guitar,” the Great Kat became known as one of the “Fastest Shredders of All Time” by Guitar One Magazine. Her tongue-in-cheek dominatrix stage persona and her knack for self-promotion, in addition to her background and talent, garnered comparisons to Yngwie Malmsteen. The Great Kat, who still shreds today, believes herself to be the reincarnation of Beethoven.

Canadian-based metal quartet Kittie formed in 1996 when two members, Mercedes Landers and Fallon Bowman were middle schoolers in the same gym class. Joined by sister Morgan Landers and Tanya Candler, they were a mixture of glam and death metal with a hard-charging, raw sound that belies their name. Several changes to the lineup occurred throughout the years, including Tara McLeod on guitar. Morgan Lander’s guitar style is fast but straight-forward, and she believes in a minimalist approach over lots of layers giving their music a thick sound with loads of personality evident in their live shows that they put on until 2017 when the band’s then bass player, Trish Doan, died suddenly. Check out what’s new with Kittie in our interview with sisters Mercedes and Morgan in this issue. 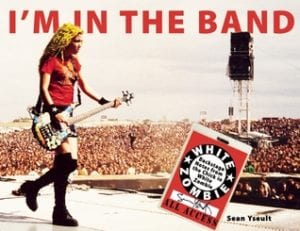 Best known in the music world as a founding member of the late ‘80s, mid-’90’s rock band White Zombie, Yseult successfully showcased what a solid and reliable bassist could achieve. Though a majority of White Zombie’s lyrics were written by vocalist Rob Zombie, it was Yseult who created much of the widely celebrated musical arrangements. Through these achievements, the band garnered multi-platinum success and two Grammy nominations. We’re currently reading her book I’m In The Band, and it’s highlighted in our What We’re Reading Now! section.

Lzzy Hale, lead singer, guitarist, and namesake of the metal band, Halestorm personifies modern metal. Halestorm became the first female-fronted band to win a Best Hard Rock/Metal Performance Grammy in 2013 for their song “Love Bites (So Do I),” a song that defies the stereotype that girls can’t rock. Hale repeatedly speaks out about gender stereotyping and Halestorm proves it’s possible to be pretty and aggressive, talented and full of attitude, all while playing fast and loud.

Nita Strauss played in The Iron Maidens, an all-female tribute to Iron Maiden, Femme Fatale, and the LA Kiss musical backing group. Nita is ranked as #1 on a list of 10 guitarists you should know by a popular guitar magazine. In June 2014, Nita replaced Orianthi in Alice Cooper’s band. She began playing music when she was 13 years old; first on drums, then on to bass before eventually settling on guitar.

Lita Ford is an enigma. She is a feminist and a sex object and the lead guitarist for a popular band who was able to emerge as a solo artist and far surpass her original success. In the ‘80s, Ford was often accused of playing into the teenage male fantasies her male metal counterparts sang about with her sexy image, but once Ford strapped on a guitar and started playing, it was evident she had the musical goods to overshadow any sexual persona she was creating. She saw her biggest hits in the ‘80s with the Ozzy Osbourne duet, “If I Close My Eyes Forever” and her own “Kiss Me Deadly.” Ford is a female metalhead pioneer, and she tours and performs today, still rocking out with her blend of melodic yet wild guitar stylings.

The ladies mentioned here are a sampling of the myriad of women dotting the heavy metal landscape, many of whom, exist on the line of the heavy metal boundary or who sing but don’t shred. Some of those women include the Wilson sisters of hard rock band Heart, fellow hard rocker, Joan Jett, and singers like Wendy O. of the Plasmatics or Doro Pesch of German heavy metal group, Warlock. Orianthi, The Commander in Chief, Leah Woodward, Sarah Longfield, and Ruyter Suys are also among the list of talented guitarists.

Of course, the list would not be complete with mentioning shredders Jennifer Batten, Nikki Stringfield, Courtney Cox, Gretchen Menn, Yvette Young, and Nili Brosh — all of whom are featured in this issue [Guitar Girl Magazine Issue 9 – Autumn 2019 – Ladies of Metal]. These women all deserve to have their name mentioned here for their contribution to women in hard rock and heavy metal music.