NAZARETH, Pa. (Winter NAMM, HALL D Booth 5602) – January 10, 2019 – C. F. Martin & Co.® (Martin Guitar) is pleased to announce that they have partnered with the Woodstock Foundation to celebrate one of the most historic moments in music history. 2019 marks the 50th anniversary of the Woodstock festival, an event that shaped a generation of musicians. To commemorate this milestone anniversary, Martin will introduce the D-35 Woodstock 50th Anniversary model and the DX Woodstock Anniversary model at Winter NAMM in Anaheim, California, January 24-27, 2019.

“If you trace everything that happened to me, from my teens all the way to the creation of Woodstock,” said Joel Rosenman, Woodstock co-founder, “it’s as if there has been a Martin guitar slung over my shoulder every step of the way. Over the years, I grew a mustache, then a beard; changed from slacks to bell-bottoms to jeans; swapped my suits for tie-dye and turtlenecks—but my Martin has always stayed the same.  It’s been an exciting road from our 1969 Woodstock to this year’s 50th Anniversary Festival. These Woodstock Commemorative-Edition guitars bring back memories.”

“If you think back to 1969 in music—the Beatles perform for the last time in public, Johnny Cash and Bob Dylan record together in Nashville—there was a lot going on,” said Chris Martin, Chairman and CEO of Martin Guitar. “So when they came out with the Woodstock album, I think that was when everyone who couldn’t go was like, “This is just like being there.” I played that thing till it wore out! We are proud that Martin guitars were played by so many of the iconic artists who stepped out on the Woodstock stage. It’s truly an honor to partner with the folks at the Woodstock Foundation to commemorate this pivotal moment in music history.”

This DX Woodstock 50th Anniversary model includes colorful custom artwork by Robert F. Goetzl that replicates elements from the original, famed 1969 festival poster. This X Series D-14 model produces the rich, dynamic sound and look that made Martin the choice of many artists who played at Woodstock. It pairs an HPL top with mahogany-grained HPL back and sides and includes Fishman® electronics. This model also includes certified sustainable wood parts. List price $799

The D-35 Woodstock 50th Anniversary model includes a tasteful custom headstock and pickguard inlay that replicates elements from the original, famed 1969 festival poster. This anniversary model includes all the features of the reimagined D-35, such as East Indian rosewood back and sides with a 35 Series wedge, a Sitka spruce top with aging toner for a vintage look, and antique white binding around the fingerboard to set it apart. It features expressive quarter-inch straight bracing for balanced power and a high-performance neck taper for comfort up and down the fretboard. List price $4,499 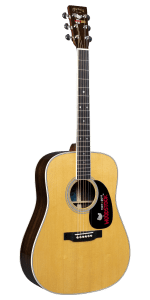 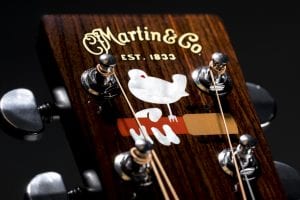 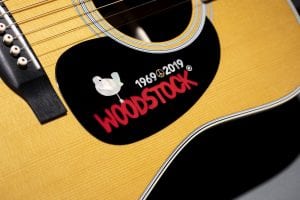 To learn more about these instruments, please visit www.martinguitar.com/new.

Samantha Crain: Emotional Healing is like Having a Cat