SCOTTSDALE, Ariz. (January 25, 2018) – For well over a century the Gretsch sound has been recognized as big and powerful, loud and clear.

In the early 1950s, Chet Atkins’ flawless finesse and Duane Eddy’s infamous twang jolted the airwaves with a sound that would forever mark That Great Gretsch Sound™ as one to be reckoned with.

When George Harrison led the British Invasion to American shores a legacy of sound soared, fueling decades of icons in Billy Duffy, Tim Armstrong and, of course, the thundering rhythms of the late Malcolm Young.

Owner Fred Gretsch particularly emphasized the pivotal golden years of the 1950s and the dawn of rock and roll. 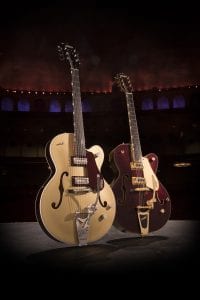 “In the 1950s when rock ‘n’ roll started, Gretsch was there defining a new sound and a new look for a new kind of music,” said Fred Gretsch. “Sixty years later, Gretsch is still the guitar of choice for players demanding cool looks and a wide range of sounds.”

The Limited Edition G6118T-135 Anniversary™ model begins with a 16-inch, 3-ply maple hollow body with ’59 trestle bracing that is powered by the acclaimed High Sensitive Filter’Tron™ pickups. Together, this combination provides the big-body power, crisp snap and exceptional fidelity that has made Gretsch famous for over 100 years.

This guitar features an opulent 2-Tone Casino Gold on Dark Cherry Metallic finish and is adorned with matching pickguard and pickup bezels to create a look and style as big and unmistakable as its sound.