Anaheim, CA – January 23, 2018 – BAE Audio [Booth 15917, Anaheim Convention Center], a manufacturer of premium analog hardware built to vintage specifications, announced that it will showcase a brand new guitar pedal at NAMM 2018: the Tonestack. The product is the second stompbox designed by BAE Audio and follows the popular Hot Fuzz, which debuted at NAMM last year. The dual-stomp pedal features a silicon fuzz circuit based on a classic fuzz of the 70s paired with a powerful three-band EQ circuit that allows unprecedented tone shaping.

“As a guitar player for many years, I’ve really enjoyed getting a chance to bridge the gap between my passion for premium audio gear and for guitar pedals, starting with the Hot Fuzz,” says BAE Audio CEO Mark Loughman. “I’ve also quite liked the sound of some of those great ‘70s silicon fuzzes and thought designing one with that same classic sound but a new level of tone control would be a great second stompbox offering from BAE. The tonestack is designed for fuzz lovers who love a good raging distortion but want that extra level of tonal control to get just the sound they’re looking for or balance it with other sounds in their rig.” 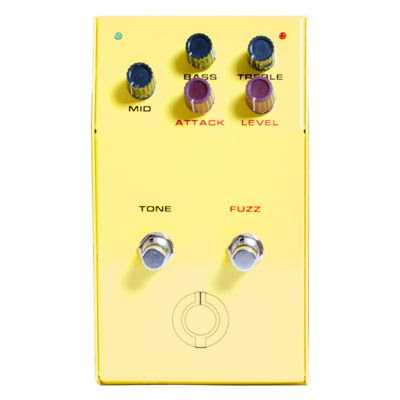 individual true-bypass stomp switches. The first is the fuzz section. This silicon-based circuit can be dialed with controls that will be familiar to users of ‘70s silicon fuzzes: an Attack knob determines the amount of distortion applied, while the Level control to set the desired output volume from the pedal. The Tonestack’s fuzz imparts an instantly recognizable spitting, buzzy grit that cuts right through even the densest mix. Whether you’re playing chords or lead lines, the Attack knob offers a range of distortion possibilities from a subtle bite to a raging fuzz.

The second section of the Tonestack is a three-band EQ circuit. Vintage versions of the fuzz circuits that the Tonestack is based on often included a single tone knob if any at all, so the Tonestack’s EQ provides a much wider range of sonic potential than previously possible in a single stompbox. Going further still, the ability to turn the EQ on and off with its own true-bypass footswitch enables guitar players to have different tonal options for different parts of a song. Kick in a midrange scoop with a bass boost for riffing on the lower strings, switching the EQ off for chord work higher on the neck. Or dial in your perfect rhythm guitar tone and kick on a nice midrange boost for the solo. Classic but with modern versatility and the quality assurance of the BAE Audio name, the Tonestack is a must try for the world’s electric guitarists.

To learn more about BAE Audio, please visit Booth 15917 at the Anaheim Convention Center or http://www.baeaudio.com.