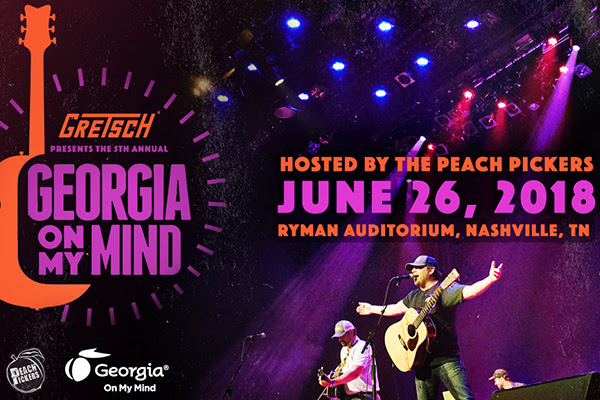 On June 26 in Nashville, Gretsch presents the 5th Annual, Georgia on My Mind concert, hosted by The Peach Pickers, two days before the opening of Summer NAMM.

Gretsch, the fourth-generation musical instruments company headquartered in Pooler, Georgia will be a presenting sponsor. This year will mark the company’s 135th anniversary. The company’s owners, Fred and Dinah are widely recognized as music industry leaders and philanthropists dedicated to enriching lives through participation in music.

Georgia on My Mind will be set in one of America’s most treasured landmarks, The Ryman Auditorium, known as the Mother Church of Country Music. It’s deep-seeded musical history provides the perfect backdrop to welcome a collection of talented Georgia-based artists for this special evening.

Celebrities with a Cause

The concert will be hosted by Dallas Davidson, Ben Hayslip and Rhett Akins of the songwriting team, The Peach Pickers as they celebrate their home state of Georgia with a chart-topping group of friends to raise money for the Georgia Music Foundation.

Over the last four years, this annual concert has raised nearly $300,000 to the Georgia Music Foundation to support music education, preservation and outreach grants. Past performers have included Jason Aldean, Luke Bryan, Chris Janson, Randy Houser and many more.

Many artists who will be performing at the concert have yet to be announced, but two artists who have been announced include Nashville Songwriter Hall of Famers Pat Alger and Tony Arata, who will perform and each receive the Georgia Music Foundation Flamekeeper Award. Introduced in 2014, the award recognizes individuals whose work tirelessly preserves and promotes Georgia’s musical roots and traditions.

NAMM as a Proud Partner

Gretsch has been a longtime exhibitor at The NAMM Show and is an integral part of the NAMM community. The heart of this concert is in line with NAMM’s mission, vision and objectives as NAMM continues to serve music educators and students with the goal of creating a world of music makers. NAMM is excited to partner with Gretsch to promote the event by giving away 60 free tickets to NAMM members, first come, first served. Sign up today!

For more information on this special star-studded benefit concert, visit the Ryman’s website.