LA-based singer-songwriter Marchelle Bradanini announced earlier this month that she will be releasing her debut solo album Only A Woman this week on July 3. Produced by her longtime collaborator Adam Landry (Deer Tick), the press release announcing the new album says, “The collection cleverly evokes highly relatable imagery of troubling, contemporary subject matter such as the emptiness of consumer culture and breaking down gender archetypes.” Joining her on drums is Amy Wood (Fiona Apple).

“Chinese New Year” is about searching for spirituality and salvation amidst contemporary consumer culture.

Bradanini tell us, “For the video, I thought the imagery of planting an iconic character like Dorothy (from The Wizard of Oz) into modern-day Los Angeles with all its weed shops, strip clubs, and cheap psychics could add a nice visual representation of the lyrics. It’s a bit dreamlike and cacophonous and strange and hopefully, it resonates with the song. We are all searching for meaning and what lies somewhere over the rainbow.

Bradanini has grown artistically and politically as well as growing her family since her last musical release under the Pony Boy moniker. As the primary caregiver for her two young children and unable to tour, she found herself refocused on the local political arena following the 2016 presidential election. All the while, the prolific artist’s creativity flourished in the recording studio resulting in the viscerally potent new album Only A Woman.

Bradanini fills us in on Only A Woman and the writing and recording process, as well as collaborating with Amy Wood. 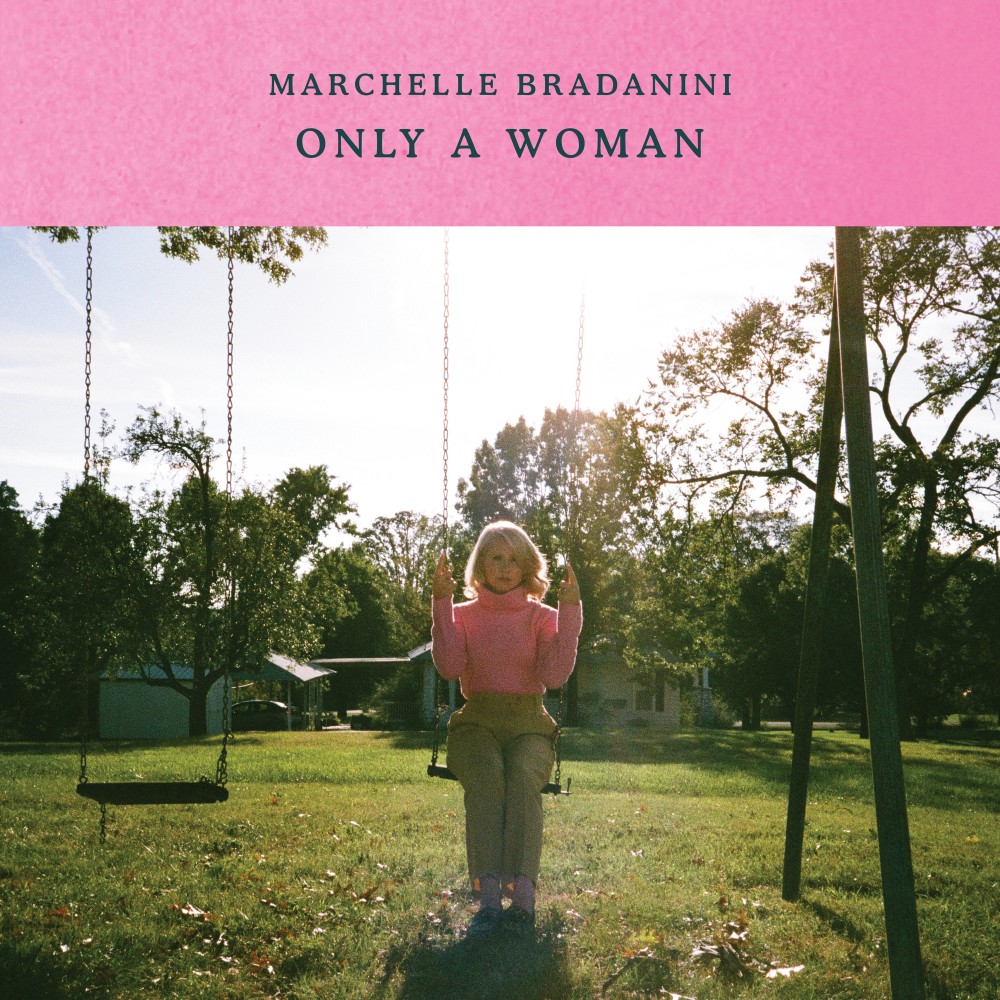 Your debut solo album Only A Woman is due out on July 3. Share with us the inspiration behind the album and what fans can expect.

I wanted to write a record about my personal experiences in modern America as a woman going through the challenges of motherhood, political apathy, depression, despair, but also an artistic awakening which I think comes from years of living and failure and heartbreak and ultimately some hope (I hope??!).

Rather than obfuscate the fact I’m no longer seventeen and now have a young family, I wanted to turn that into a focal point as I feel like there could be more female voices, in particular, talking about trying to make sense of the world as a woman and an artist and how we attempt to reconcile the two. I’ve also decided that the genre of mom-rock is woefully underserved, and I’m here to attempt to right that wrong.

The title of the record, Only A Woman, is a bit of a sarcastic dig at how we, as a society, undervalue and under-appreciate women when we are capable of so much. Along with the heaviness, I tried to throw in a hefty dose of satire as that was really the only way I could make sense of the daily absurdities and horrors we’ve been facing these past few years in particular.

In your bio, it states you studied film in college, and you talk about videos saying, “As soon as I write a song, I picture, thematically, what’s happening.” Tell us about that creative process.

I tend to have a rhythm or melody in my head, and I’ll sit down with an acoustic guitar and pad of paper to write out an idea that will eventually become a song. From there, I visualize a little short film translating the musical themes into a visual one. I’m fine with surrealism and not doing totally literal videos as I like there to be some space for the listener or viewer to find their own meaning as well, ideally.

For example, the video for “Chinese New Year,” which is ultimately about searching for spirituality and salvation in contemporary consumer culture, I thought the imagery of planting an iconic character like Dorothy (from The Wizard of Oz) into modern-day Los Angeles with all its weed shops, strip clubs, and cheap psychics could add a nice visual representation of the lyrics. It’s a bit dreamlike and cacophonous and strange, and hopefully, it resonates with the song. We are all searching for meaning and what lies somewhere over the rainbow.

I’ve always liked filmmakers that use symbols or have an element of mystery and beauty and ugliness all mixed in together, which is really what life is. I love David Lynch and his hyper-stylized version of reality with all its garish charm along with Jodorowsky for his religious and allegorical imagery and John Waters for his sense of humor and ultimate heart. I personally like to play around with stereotypes as a bottle blond and challenge what we assume about people from their physical presentations and therefore perceived limitations.

Artistic music videos for the singles “Only A Woman” directed by Amy Barham and “Oscar Wilde” directed by Melissa Hunger have already been released. How was it working with those directors and the filming process?

The nice thing about living in Southern California is that it’s really a company town. Almost everything and everyone somehow revolves around the film industry, which is still sort of magical and blows me away that people can fundamentally make a living with their imagination.

Melissa and Amy were two filmmakers and writers I’ve been a fan of for a long time. They both possess unique points of view, and I was excited to see what they would bring to the music rather than just servicing my ideas. It was also very important for me to work with female directors as there are so many talented women out there. With Melissa, we had a pretty big crew of almost entirely women, which is extremely rare. And with Amy, we wanted to shoot in all these public spaces without a permit, so we just went out with an iPhone and one other person to film in the wild. I love that technology has at least broken down a barrier of being able to create content on your phone and the way that opens the field that was once so financially prohibitive. When I was really young, you still had to go into a studio, and now you can literally record an opus on GarageBand in your kitchen.

Amy Wood joins you on drums for Only A Woman. How did that collaboration form?

I saw Amy play in a band, and I somehow convinced her to be my friend and make records with me. I’ve been playing with Amy (and her father, who is also an amazing producer and guitar player, John Would) for over ten years. She has such sensitivity to the work and vocals that a lot of drummers are missing. She really listens, and her feel and range is insane. She’s the heaviest drummer I’ve ever played with and can also break your heart with a set of brushes. There’s a reason Fiona Apple plays with her, and I just feel so fortunate to have her on this record and to know her as a person. She’s a rare gem.

Previously recording under the moniker Pony Boy, will you still be releasing music under that name or continue as a solo project?

Yeah, I think getting older, you become less afraid to take risks and fail and try new things as you grow and evolve as a person and a performer. I wrote this really personal collection of songs in a few days that became, Only A Woman, and knew it did not belong in the Pony Boy world. That project, for me, is really an alter ego who is pretty fearless and sonically dissonant and not afraid to be abrasive. I always get a kick when my songs end up in film and television in almost exclusively sex scenes, bar scenes, or just situations with a bit of darkness lurking around the corner. Releasing this new project under my actual name, just felt more appropriate for the material, but I, of course, would like to revisit Pony Boy and continue writing songs when it feels right for that voice. I also have a few other side projects in the works.

You cite quite a few musical inspirations in your bio. Which had the biggest impact on you as a songwriter?

That’s a hard one. Probably John Prince and then Lucinda Williams. The way they can make you laugh one minute and completely devastate you the next. There is so much authenticity to their writing and voice. It’s simple but not cliché. Plain spoken yet deeply profound. Dylan is probably the other as his lyrics are just on another level and continue to resonate through generations.

When did you start playing guitar, and what attracted you to the instrument? What guitars do you currently play, and why?

I wanted to play guitar when I was about seven but was told that I had to learn flute or clarinet. I went with flute, which was informative for breath control and singing, but sort of heartbroken I didn’t have anyone to teach me guitar. I was always a singer and was always fundamentally dependent on another guitar player or piano player. It wasn’t until I became serious about songwriting in my early twenties where I just didn’t want to rely on anyone else. I also realized that so many of my favorite songs were simple cowboy chords, so I just really taught myself the basics so I could write songs.

I’m not a great guitar player, as it’s really just a songwriting tool for me primarily. I’ve also grown to be okay with that, as it’s fun for me to bring in great guitarists to add color to compositions that I wouldn’t have thought of.

My primary writing guitar is an early 1970s Gibson L-00, and my main stage guitar is a 1961 Silvertone U-1 by Danelectro. I like it because I can check it on an airline and it takes a licking. It’s got a great tone and doesn’t’ instantly define you musically like a Strat or a Tele can for me.

What do you hope your fans take away with them when they listen to your music?

First off, thanks for giving it a listen. I know there’s a world of music out there, and it’s never lost on me when someone puts your record into their headphones.

I guess the take away I’d like is some mild comfort to keep fighting the good fight and know that you are not alone, and just because you happen to somehow find yourself in the body of a grown-up doesn’t mean any of us have anything figured out. Also, please vote in November.

Only A Woman tracklist: