Due to the pandemic, Devi had to scrap her original plan to shoot “Stay” at a disco roller rink in Brooklyn. “I had to get creative,” Devi says, “and it came out really fun. All I can say is, look out for the dancing cartoon zombies.”

With its pounding dance beat, layered guitars and soaring vocal, “Stay” is reminiscent of “She Sells Sanctuary” by the Cult. “I asked Sylvia Massy, who mixed the EP, to give ‘Stay’ that kind of pounding kick drum and shimmery guitar sound,” Devi agrees. “She really delivered it. Working with Sylvia was a dream come true.”

So was recording with the bassist for Devi’s favorite band. Carlsson and Devi met backstage after Gov’t Mule’s annual New Year’s Eve run at the Beacon Theater in New York City. “Jorgen and I got into a deep chat about production,” Devi explains, “and wound up talking about recording together. I was thrilled, as I consider him one of rock’s greatest bass players. Six weeks later we were jamming at Kaleidoscope Sound in New Jersey. The chemistry between me, Jorgen and John was great, and that session became A Zillion Stars Overhead.”

Although most of the EP is guitar-driven blues-rock, Devi knew Jorgen was the right bassist for “Stay,” too.  “Jorgen grew up in Sweden, so he has a soft spot for ABBA,” Devi says. “I knew he’d enjoy recording ‘Stay.’ He used a pick to give it the perfect driving bass line for John’s slamming disco-rock beat.”

Musically, “Stay” is very uplifting, but the song was inspired by a tragedy, hinted at in the video by the appearance of Shiva, the Hindu god of death and transformation—and those dancing zombies.

“I wrote ‘Stay’ after dinner with a friend who had lost his beloved young wife to cancer and couldn’t imagine carrying on without her,” Devi recalls. “As the song goes: ‘I know she’s gone/I’m standing here/asking you to move on/not disappear.’” 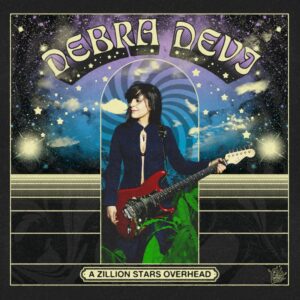 The message to trust in the power of love in the face of loss is even more resonant during the pandemic. Devi and her band play “Stay” regularly during their bi-weekly “Jamification Station” live-stream series from Silver Horse Sound in Hoboken NJ. “It always lifts our spirits,” Devi says.