Toronto, ON –  September 11th, 2019 –Toronto duo Carlyn Bezic and Amanda Crist aka Ice Cream today announce the release of their sophomore album, FED UP,  the follow-up to 2016’s critically acclaimed Love, Ice Cream. FED UP is set for release on November 15th. The duo also shared the second single and video to be taken from the album “Modern Life” and details of their upcoming tour. Full dates below.

Borrowing in equal measure from pop, electronic music, R&B, and classic rock, with FED UP Ice Cream have created a vibrant sonic world where shuddering beats, catchy melodies, and heavy rock-and-roll riffs lock perfectly into lyrics about the pressures of living under late capitalism and the male gaze.

“Modern Life” is the second single to be taken from the album. Speaking on the track Amanda Crist explains,  “Modern Life” focuses around the frustrations that come from living a metropolitan existence. How the exploitation of the capitalist system can become so consuming and restrictive, living as an authentic human can seem like a challenge.”

Ice Cream is the product of years of collaboration between Amanda Crist and Carlyn Bezic, two longtime veterans of the Toronto music scene. Crist has played and toured with US Girls, and Bezic with Slim Twig; together, they’re members of the supergroup Darlene Shrugg. They’ve been making music as Ice Cream for five years, and what originally started out as a spare “molecular pop” project has evolved into something far more lush and layered, borrowing in equal measure from pop, electronic music, R&B, and classic rock to make a sound that’s completely their own. 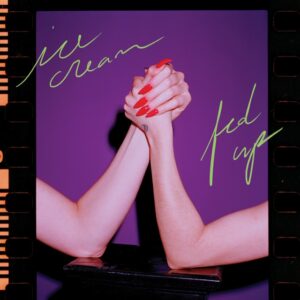