Alt-pop band THE GRAHAMS have released the empowering title track off their upcoming third album KIDS LIKE US (set for release on March 27, 2020 via 3 Sirens Music Group/RED MUSIC/The Orchard). The band explains to Culture Collide (who premiered the track yesterday), “While the sounds and imagery of [Bruce] Springsteen and [Neil] Young emphasized breaking away from the constrictions of family, economy, society on the fringes of a dead-end town (like Springsteen, in our case it was the Jersey suburbs), “Kids Like Us” explores growing up and living in towns that are simultaneously confronting climate crisis and environmental damage, opioid epidemics, underemployment, and an entire country on the brink of madness. Overall, we were experiencing a need to break free. Break free from politics, from the hatred, from adulthood, from the constant clamor and disappointment, from the Nashville scene, from preconceived notions of who we were, and from the artistic constraints we felt in the past.”

The balance of Alyssa Graham‘s calm and subtle vocals on the verse, vs. on the fervent chorus, help punctuate the dichotomy between the times we live in now vs. the ones they knew as kids. The band wrote the song with their best friend from childhood Bryan McCann. For three kids from Jersey now grown with kids of their own, perhaps the most personal and biographical line “Baby I don’t have to tell you what becomes of kids like us, we’re young enough to run away but old enough to rust,” is the reason they chose it as the title track.

Kids Like Us finds The Grahams exploring balmy and graceful dream pop, 50’s mod-influenced garage-rock energy, 60’s and 70’s style groovy guitars, and an explosive Morricone-esque cinematic intrigue to great effect. “We started in Chicago with the blues and Motown,” Doug says, “and we ended in L.A., listening to the Beach Boys. All of it found its way into the record.”  Along with the late and celebrated Richard Swift (former member of The Shins and The Arcs who worked with Damien Jurado, Nathaniel Rateliff, Guster, and many more), the record is also co-produced by Dan Molad (Lucius, Elizabeth & the Catapult, The Wild Reeds) who enabled The Grahams to channel all of their chaotic stimulus into something big, lush, ambitious, and profoundly satisfying.

As with their 2013 debut Riverman’s Daughter and 2015’s Glory Bound, The Grahams lit out for parts unknown to gain inspiration for writing this ambitious new record – this time on a beguiling motorcycle ride along Route 66 at the height of the 2016 election season. “Everything about Route 66 – the neon signs, the motels, the cars, the souvenirs, even the menus – is stuck in a different time,” Alyssa says. “Of course the music that developed would have moments of fantasy, moments of horror, even some moments of the supernatural.”

The resulting album embraces the American songbook and finds the band swathed in a musical time warp when Brian Wilson, Nancy Sinatra, Dusty Springfield, The Ronettes, and Diana Ross & The Supremes ruled the airwaves. 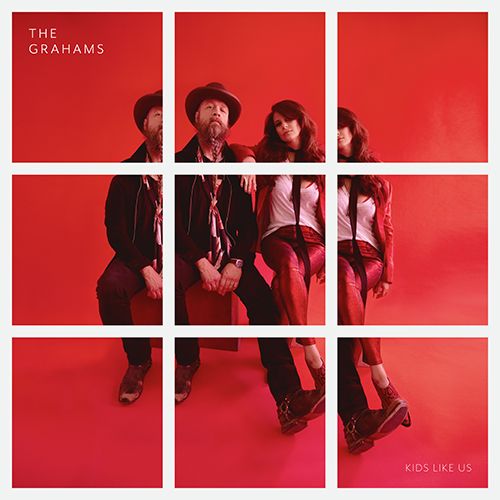 The Grahams is Alyssa and Doug Graham. Kids Like Us will be released March 27, 2020 via 3 Sirens Music Group/RED MUSIC/The Orchard. Available to pre-order now.