Breakthrough singer, songwriter, and musician Tenille Townes’ new rendition of Leonard Cohen’s iconic song, “Hallelujah,” debuted on Friday. Listen/share HERE. With the release, Townes joins an impressive group of artists who have performed their own versions of the track including Jeff Buckley, Brandi Carlile, Bob Dylan, k.d. lang, Willie Nelson, Regina Spektor, and Rufus Wainwright among many others. 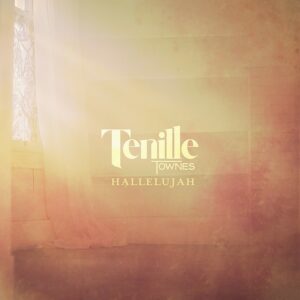 Of her decision to record the song, Townes shares, “This song brings me comfort and hope, and during these times, we could all use a little bit of both. I wanted to share my version of this song because it holds a special place in my heart. It played an instrumental role in my signing at Sony Music and it has always been a special song to me, but right now, this song has reached a different place in me than it ever has before. I hope the word ‘Hallelujah’ carries a reminder that we’re going to be ok.”

The release continues a breakout year for Townes, who recently won New Female Artist of the Year at the 55th Academy of Country Music Awards and is still nominated for Musical Event of the Year for “Fooled Around and Fell in Love” with Miranda Lambert, Maren Morris, Ashley McBryde, Caylee Hammack, and Elle King at this year’s ceremony. Townes will also perform during the awards show, which will air Wednesday, September 16 at 8:00pm ET/7:00pm CT on CBS.

Of the album, Townes reflects, “The Lemonade Stand is a collection of songs that mean so much to me and are the way I see the world in this season of my life right now. I want this music to be like a gathering place, where people can come and be filled up. I hope this record reminds people of who they are, that they are not alone, and reminds them of their dreams. This record is the dream that I had when I was a seven-year-old kid singing along in the backseat of the car. She would really be freaking out right now.”

The release of The Lemonade Stand adds to breakthrough series of years for Townes, who is a MusicRow 2020 Next Big Thing Artist, an iHeartCountry’s “On The Verge” artist and has been included in Amazon Music’s “2019 Artists To Watch,” CMT’s “Next Women of Country,” iHeart Radio’s “Artists To Watch in 2019,” “The Bobby Bones Show’s” “Class of 2019,” CMT’s “Listen Up,” and the inaugural class of “Opry NextStage.” Additionally, she is featured in the Country Music Hall of Fame & Museum’s new American Currents: State of the Music exhibit.