Ten-time GRAMMY® winner Taylor Swift has teamed with Vevo to reveal the carefully placed Easter eggs and deeper meanings within her latest music video, “cardigan,” from her critically-adored new album, folklore for a brand new episode of Vevo Footnotes. Vevo Footnotes dives into all the behind-the-scenes details, from social distancing standards to the cinematic styles that influenced Swift’s vision for this project.

“I was inspired by the feeling of isolation and how that can be either freeing or terrifying,” Swift tells Vevo exclusively about her creation process during a worldwide pandemic. Swift was inspired by some of the period pieces and fantasy films she was watching in quarantine. With a health inspector on-set, Swift did her own make-up, hair and wardrobe styling, while the photography crew, used a “techo crane” for closeups to ensure social distancing at all times. A complete outline of “Taylor Swift – The Making of ‘Cardigan’ | Vevo Footnotes” is listed below.

[00:14] Taylor wrote and directed the video herself. She wanted it to have a clever plot device that also served as a metaphor.

[00:21] The photo of the man in this scene is Taylor’s grandfather, Dean, who landed on the beaches at the Battle of Guadalcanal.

[00:29] Her grandfather is also referenced in her song “epiphany.” 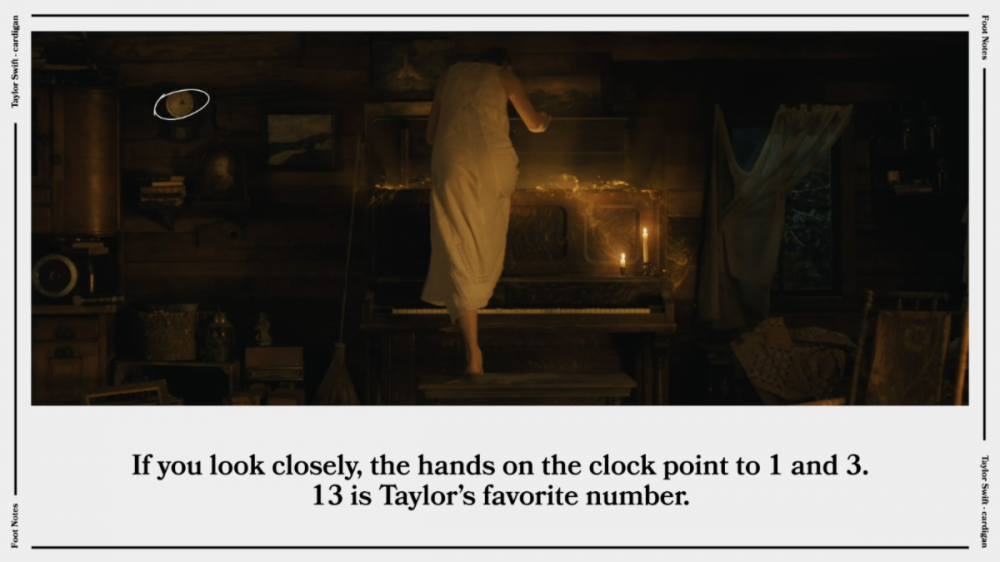 [00:50] And notice the painting of a white house next to the piano. Taylor painted this herself during the first week of quarantine.

[01:02] Taylor often leaves Easter eggs in her videos for fans but folklore purposefully includes easter eggs in the lyrics too.

[01:08] Taylor developed intentional character arcs and recurring themes across the songs that map out who is singing about whom.

[01:17] “There’s a collection of three songs I refer to as The Teenage Love Triangle (in my head). These three songs explore a summer love triangle from all three perspectives at different times in their lives.” – Taylor Swift

[01:22] “It’s like this one event happened in their town and it affected them each differently.” – Taylor Swift

[01:30] Taylor wrote and recorded the album while in quarantine during the Covid-19 pandemic.

[01:34] “I was inspired by the feeling of isolation and how that can be either freeing or terrifying, and how it causes you to reminisce on the past.” – Taylor Swift

[01:43] “cardigan,” along with a majority of the album, was produced by Aaron Dessner from The National, one of her favorite bands.

[01:50] They met about a year ago when Taylor attended a concert for The National in Brooklyn.

[01:56] “I started asking him about what their writing process is. He told me they work remotely a lot because they all love all over the world. When quarantine hit and I found myself wanting to write, I reached out and he was really wanting to create too. It’s been one of the most effortless collaborations and I’m very lucky to have met him.” – Taylor Swift

[02:15] The forest scene represents the evergreen beginning of a relationship where everything seems magical and full of beauty… 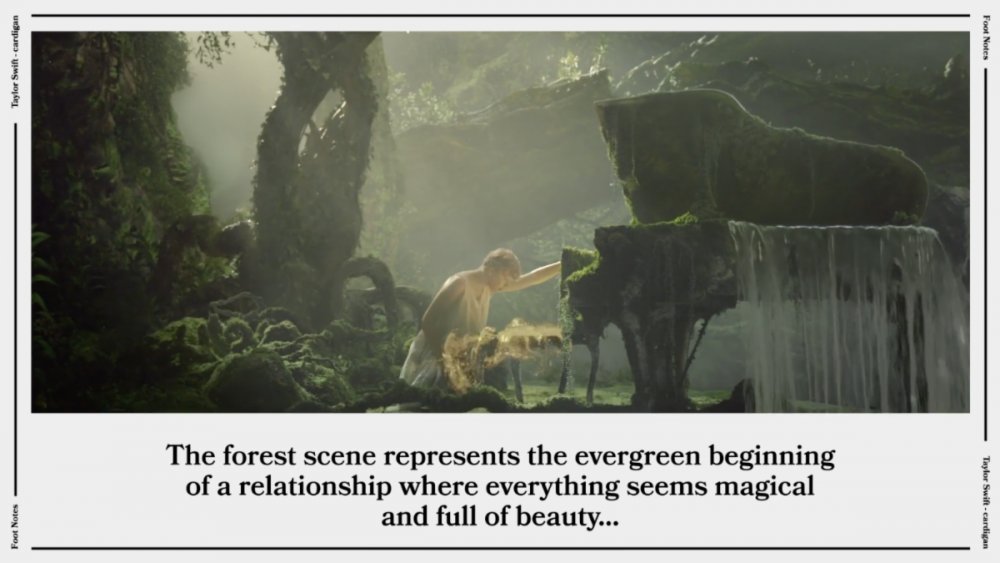 [02:22] Whereas, this ocean scene represents the isolation and fear involved while a relationship is breaking down.

[02:29] Aaron Dessner was staying in upstate New York with his family when Taylor reached out.

[02:33] He sent her a folder of music that he had made recently and within hours Taylor had sent back a fully written version of “cardigan.’

[02:38] Aaron Dessner’s twin brother Bryce also helped with the orchestration you hear on the song.

[02:44] Taylor worked on this music video with Oscar nominated cinematographer Rodrigo Prieto who she previously worked with on her music video for “The Man.”

[02:48] She was inspired by some of the period pieces and fantasy films she was watching at the time and sent Prieto a number of visual references for each scene…including photographs and drawings as well as a time-coded storyboard shot list.

[02:58] Due to Covid-19 safety precautions Taylor did her own hair, make-up and styling on set. She wore her own nightgown.

[03:03] A health inspector was also on site and used UV lights and sprayed down the piano keys in between every single take.

[03:07] A “techno crane” was used to film in order to eliminate a close up camera operator to ensure rigorous social distancing standards.

[03:13] Editor Chancler Haynes and Taylor worked simultaneously from two separate locations on set in order to edit the video in real time.

[03:34] Returning to the cabin signifies returning to a sense of self after experiencing love lost.

[03:31] However, Taylor’s clothes remain soaking wet to represent that she was changed by the journey but has discovered who she always was.

[03:39] Because the release was so top secret, Taylor wore an earpiece to prevent playing the song out loud during filming…

[03:46] And special effects added the word “folklore” to the piano on the same day the video was actually released.

[03:52] “I view folklore as wistful and full of escapism. Sad, beautiful, tragic. Like a photo album full of imagery, and all the stories behind that imagery.” – Taylor Swift