Home News Music News Sunny War Covers Ween’s “Baby Bitch” – “Anarchist Gospel” To Be Released...
Sunny War will release her New West Records debut Anarchist Gospel on February 3rd, 2023. The 14-song set was produced by Andrija Tokic (Alabama Shakes, Hurray for the Riff Raff) and features appearances by Jim James of My Morning Jacket, Allison Russell, David Rawlings, Jack Lawrence of the Raconteurs, Micah Nelson, John James Tourville of The Deslondes, Kyshona Armstrong, Dennis Crouch, The School Zone Children’s Choir, and more. All songs were written by Sunny War with the exception of “Baby Bitch” (Ween) and “Hopeless” (Van Hunt). With Anarchist Gospel, Sunny has crafted an eclectic set of songs that draw on a range of ideas and styles: ecstatic gospel, dusty country blues, thoughtful folk, rip-roaring rock and roll, even avant garde studio experiments. She melds them together into a powerful statement of survival, revealing a probing songwriter who indulges no comforting platitudes.
“I feel like there are two sides of me,” says the singer-songwriter and guitar virtuoso. “One of them is very self-destructive, and the other is trying to work with that other half to keep things balanced.” That’s the central conflict on Anarchist Gospel, which documents a time when it looked like the self-destructive side might win out. Sunny says, “Everybody is a beast just trying their hardest to be good. That’s what it is to be human. You’re not really good or bad. You’re just trying to stay in the middle of those two things all the time, and you’re probably doing a shitty job of it. That’s ok, because we’re all just monsters.”
Today, Stereogum premiered Sunny War’s cover of Ween’s “Baby Bitch.” She says, “‘Baby Bitch’ is one of my favorite Ween songs. It’s pretty and also petty as hell. I first heard Ween’s Chocolate and Cheese album when I was 8 or 9. My mom and stepdad were really into Ween at the time. Throughout the years I’ve found myself returning to ‘Baby Bitch’ every time I end up angry with someone I once loved. I used to play the cover while busking on the Venice Boardwalk and am happy to have finally recorded it. I think the children singing the choruses makes it just a little more petty.”
Share Sunny War’s rendition of Ween’s “Baby Bitch” HERE.
NPR’s All Songs Considered previously premiered the first single “No Reason,” calling her new music “thrilling” while Under the Radar premiered the album highlight “Higher,” which features David Rawlings and Jack Lawrence.
As a kid, Sunny War was obsessed with AC/DC and also loved ’80s guitar bands like Motley Crüe. Later, she was obsessed with Bad Brains, the Minutemen, and X. She is the rare roots artist who covers Ween and can drop a Crass reference into a song. “I don’t really make music with a traditional roots audience in mind. I like weird music, outsider music, like Daniel Johnston and Roky Erickson,” she says.
Even as Sunny War was developing a guitar style that married acoustic punk to country blues, her two sides were already at odds. As a teenager, she began drinking heavily, which led to her dropping out of school, and quickly becoming addicted to heroin and meth. For money, she busked along the boardwalks of Venice Beach, recording an album to sell out of her guitar case and letting that self-destructive side win most of the battles. A series of seizures landed her in a sober living facility in Compton, so emaciated that she could only wear children’s pajamas. Music remained a lifeline, and she fell in with a crew at Hen House Studios in Venice, where over the years she made a series of albums and EPs, including 2018’s With the Sun and 2021’s Simple Syrup.
Twelve years after she kicked meth and heroin, Anarchist Gospel documents a moment when Sunny War had finally gained the upper hand on her self-destructive side, only to watch that stability crumble.
After a difficult breakup and her lease in Los Angeles ended, Sunny moved to Nashville, where she was born and lived until she was twelve years old. Among the items she packed were demos for several new songs of heartache and hard-won hope. She booked sessions with Tokic and captured a raw energy in Anarchist Gospel.  As the recording wound down, Sunny received word that her father was in the hospital and wasn’t going to make it. She says, “This album represents such a crazy period in my life, between the breakup and the move to Nashville and my dad dying. But now I feel like the worst parts are over. What I learned, I think, is that the best thing to do is just to feel everything and deal with it. Just feel everything.”
Because it promises not healing but resilience and perseverance, because it doesn’t take anything for granted, Anarchist Gospel holds up under such intense emotional pressure, acknowledging the pain of living while searching for something that lies just beyond ourselves, some sense of balance between the bad and the good.
Sunny War also announced her initial tour dates in support of Anarchist Gospel launching in New York City on February 22nd, 2023. A series of live appearances supporting Sarah Shook & The Disarmers have also been announced as well. See tour dates, with more to be added, below.
Sunny War’s Anarchist Gospel will be available across digital platforms, on compact disc, and standard black vinyl. A limited to 750 Opaque Red Color Vinyl Edition will be available via Independent Retailers, a limited to 300 Translucent Red & Black Marble Color Vinyl Edition will be available via Heady Wax Fiends, and a limited to 200 Silver with Red Swirl Color Vinyl Edition will be available via Magnolia Records. A limited to 500 Hand-Poured Opaque Red, Black, and White Color Vinyl Edition will be available via Rough Trade and is also available for pre-order NOW via NEW WEST RECORDS. 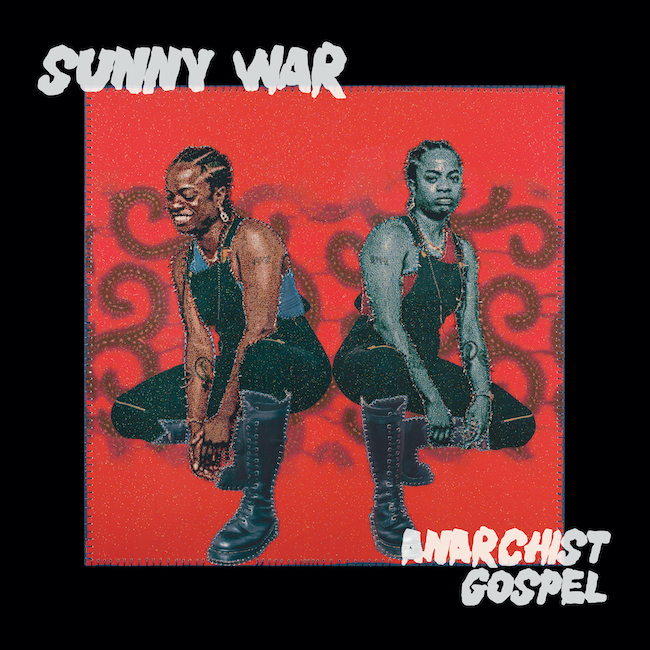