Vicious, all-female hard rock/heavy metal band, Stormstress, released a brand new single on November 20, 2020, recorded at The Den Studios of North Reading and produced by Liz Borden and Sarah Fitzpatrick, along with a music video for their aggressive anthem “You Can’t Hurt Me Now” filmed by brother and sister team Troncat FPV and Fuel Heart Productions.

Their second single, “You Can’t Hurt Me Now,” reflects on a sweet situation gone sour and the true empowerment that comes with not only realizing that you’ve been mistreated and that it’s time to go, but also summoning the courage and power to walk out the door, slam it shut, and lock it behind you. The music video features unique drone footage showcasing the band driving home their newfound freedom. The trio speeds down the highway in a convertible amidst shots of them rocking out on their instruments. It’s classic rock ‘n’ roll.

Combining their shared love for heavy music, ambitious spirits, and a unified dream of achieving greatness while bringing their self-empowering message to the world, mirror twins Tanya Venom (guitar/lead vocals) and Tia Mayhem (bass/vocals), along with their best friend, Maddie May Scott (drums/vocals), knew that forming a band together was an undeniable necessity. Thus, in October of 2019, amongst the rare bomb cyclone that hit Boston and under the influential Hunter moon that inspires drastic change and taking action, Stormstress was formed, striking with electrifying riffs, thunderous grooves and catchy choruses. 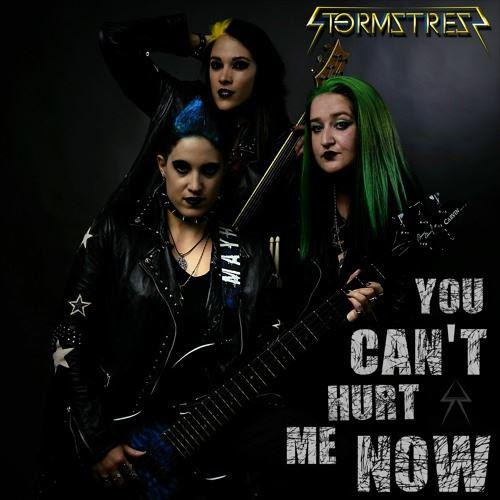 With their first release since the COVID-19 Pandemic devastated humanity, immediately following their debut show and single release, Stormstress aims to remind the people of the world to stay strong by accessing their inner power in these introspective times and to use it to decide what deserves to remain with you on your journey, and what to leave behind.

They are ready to take the world by storm.