Notorious for shooting from the hip and telling it like it is, Jordan Rainer’s approach to performance and storytelling is one that sets her apart and Damn Sandwich is the perfect example of that. Directed by Nashville videographer, Alejandro Medina III (who also directed her debut video Black Water Rise), this fun and quirky video takes place in a day in the life of a couple just having a rough day. The woman wakes up “in a mood” and the poor guy is just trying to survive the storm. The on-screen couple played by good friend and fellow recording artist Kyle Elliot and Nashville actress Sedona Feretto had instant comedic chemistry making them a relatable couple for her fans. 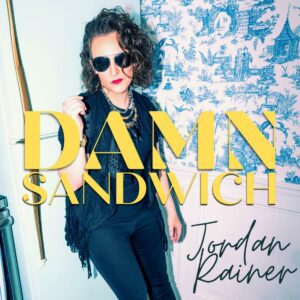 Sandwich is the first single that Jordan herself was not a writer on. “This started out simply as a demo I was hired to record. I was honored to do a demo for anything Whisperin’ Bill was a part of, as he’s a hero of mine,” shares Jordan. “I locked myself in the studio for four days, playing every instrument myself – guitar, drums, bass, piano, etc – and spent time getting everything just right. But after doing the demo, I loved the song so much I just had to ask their permission to record and release it myself.”

Releasing this song was clearly the right call since it is currently in the Top 20 on the Texas Regional Radio Report Chart and climbing. With a line dance already created for this song, Jordan is making a name for herself among some of the biggest names in country music while performing predominantly in Texas, Oklahoma, Arkansas and all across the southeast, while also visiting the stations in support of the song. “The response has been absolutely astounding. Radio all across Texas is spinning it like crazy, fans are calling and writing in to request it, and I couldn’t be happier to see all the love it’s getting.”

With an upcoming Me Day tour set to launch later this year, she is using this tour to not only bring her live show to the fans in as many cities as possible, but she’s giving one lucky fan at every show an entire Me Day basket complete with dinner on her, wine/whiskey of their choice, a gift card for a spa day and other goodies. Be sure to visit her website and follow along with her on Facebook, Instagram, TikTok, Twitter, and YouTube.