October 27th, 2020 New York NY/London, UK:  Smoke Fairies have announced details of an exclusive global live streaming event to be broadcast online on the evening of Sunday, November 8th. The duo headed to the iconic De La Warr Pavilion in Bexhill-on-Sea on the South Coast of England to perform songs drawn from across their back catalogue, from early obscurities up to their newest album Darkness Brings The Wonders Home, released earlier this year.

The band was due to tour the UK this month in support of the new record but, with those dates postponed until 2021, hope that with this unique performance audiences around the world will have the chance to watch them perform a one-off show in a way not seen before and from the safety of their own homes.

The special event has been professionally shot on six cameras, the venue itself was empty apart from a skeletal crew of sound, camera and lighting but the band are aware of the wider implications to the live industry the pandemic is having and will be sharing proceeds from the event with the De La Warr Pavilion itself and also with the #saveourvenues and #wemakeevents campaigns.

Jessica Davies from the band explains, “As we live through a time where the culture industry is in a gravely perilous position it was poignant to visit an empty venue, designed and built to nurture the local community with culture and arts and fill it with sound. The audience’s presence was sorely missed but we hope in our small way, through this event we can both entertain and help out our industry at the same time.”

The show will stream live on Sunday, November 8th at 3 pm EST (8 pm GMT, 12 pm PST). Tickets for the event are on sale now from smokefairies.com, Dice and from the De La Warr itself.

Darkness Brings the Wonders Home, Smoke Fairies’ widely acclaimed first album in four years and the first to come out on the band’s own label, Year Seven Records, was released January 31st and has seen some remarkable chart positions for a band operating as a fully independent venture (#1 UK Rock Album and  #6 on the Independent Album Charts).  The set was recorded with producer Phil Ek (The Black Angels, Fleet Foxes, The Shins) over the course of a rigorous month-long session in Seattle. Smoke Fairies (aka Jessica Davies and Katherine Blamire) drew their inspiration for the album from mysteries both real and imagined: sea monsters, flocks of crows taking flight in extravagant formation, and strange creatures dwelling in the mud near their new South London abode. “Times of darkness are when people are often the most imaginative,” says Jessica in reflecting on the album’s title. “It helps you to see all the wonders of the world you hadn’t noticed before – the things you’ve been blind to because you’ve been on autopilot for so long.”

Smoke Fairies were the first UK act to release a single on Jack White’s label Third Man Records and was produced by White who also played guitar and drums. Other notable recordings include a cover of Neil Young’s ‘Alabama’  from his Harvest LP which appeared on a special Mojo album to mark the approaching fortieth anniversary of the album.  Jessica and Katherine also contributed vocals to the track ‘Valentina’, a tribute to Valentina Tereshkova, the first woman in space on The Race For Space, the second album by Public Service Broadcasting.  The band has toured this side of the Atlantic with Laura Marling, Rasputina, and most recently Blitzen Trapper and Dawes. They hope to return in the not too distant future.

Be sure to catch Smoke Fairies’ Smoke Signals podcast, featuring Jessica and Katherine’s charming and drily funny reminiscences about their early days getting started in music: https://smarturl.it/smokesignalspodcast 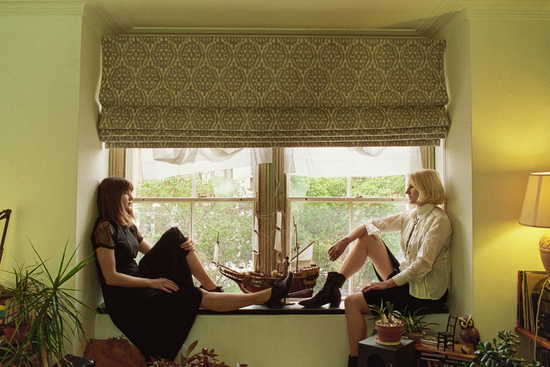