When it comes to romance, singer/songwriter Wonky Tonk has seen the good, the bad, and the boring. Her forthcoming album, Lessons & Lovers (Grace and Grits Records), is a fictionalized composite of real relationships and experiences, some of which contributed to bouts of depression, while others, thankfully, lifted her out of the dark places and put her on a path to emotional recovery.

“All songs on this record are highly personal and not personal at all,” she said. “The album is about feeling lonely and broken and pushed out, but also the self-love and willpower to keep picking up and walking on, again. As a whole, it is the concept of reframing anything that hurts or triggers your heart into a helpful lesson by way of love. I think that this record will appeal to anyone who likes to dance, scream, cry, and breathe.”

With a vocal softness that belies her biting lyrics, Wonky Tonk sings of obsessive love on “Cryin’ Shame”: “Do you hear me calling, calling out your name, in my sleep and when I’m wakin’, I know I must sound insane…”

“Never Trust a Doctor” is a playful, done-me-wrong song about a lying lover: “You say that you want me for the rest of your life, but which life is it, which bald-faced lie… Never trust a doctor with your heart.”

On “Wonk On,” the singer is finally putting a bad relationship behind her: “Put on these new boots, I got a feeling that I’m walking away from the blues, ‘cause I’ve been running away from the memories of you for too long… I’m gonna wonk on, I’m wonkin’ away from you.”

Though most of the 11 songs on “Lessons & Lovers” are loosely based on real people in Wonky’s life, she avoids naming names, perhaps to protect the guilty, except on “Everyone’s Got a Brian.” The humorous, profanity-laced musical tirade was inspired by a grumpy sound engineer at a concert, who insulted Wonky’s band.

“The song is really about how easy it is to not be a jerk-face, and how hard it is for most of the world to act in love,” she said.

Wonky Tonk was born Jasmine Poole in Cincinnati, Ohio, but grew up across the Ohio River, in Northern Kentucky. The story behind her stage name is long and complicated but involves a high school project, a late-night hang-out with friends at Waffle House, and, ultimately, the acquisition of a banjo. Wonky graduated Magna Cum Laude from Highlands High School, studied digital design for a while at the University of Cincinnati, before transferring to Northern Kentucky University, where she earned degrees in Electronic Media Broadcasting and Political Science. With an ambition to change the world, she also found time to serve two terms in AmeriCorps.

Though she grew up surrounded by musical friends, including a dad who “was always walking around in his undies and cowboy boots, singing songs about pink bananas and lonely monkeys,” Wonky did not always want to be a musician. For years, she dreamed of being a vegan chef, filmmaker, or entertainment lawyer. However, at age 25, after being hospitalized for depression and anxiety, she drove to Chicago to visit a friend. It was on that trip that her goals shifted to music.

“I went to a tarot card reader, and she told me to follow my Dharma: to travel, entertain, teach and inspire,” Wonky said. “Having nothing to lose, I listened and here we are. Life is weird.”

Wonky Tonk has since released two previous albums, “Get On the Train” and “Stuff We Leave Behind,” as well as the EP “Super Holy Fantastic” and several singles. Her latest album, “Lessons & Lovers,” will be released on April 24, 2020, through most digital outlets.

Information about Wonky Tonk is available at www.WonkyTonkMusic.com. 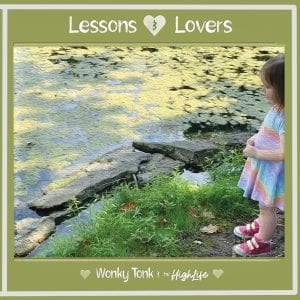