South Carolina-based cosmic Americana artist She Returns From War is excited to share her new single “Snakeskin Boots” today. The new track, the first from the band since their 2018 sophomore album Mirrored Moon Dance Hall, continues her tradition of masking the heartbreak of a love lost through whimsical wordplay and a dazzling tropical goth country sound.

On the new single frontwoman Hunter Park shares, “‘Snakeskin Boots’ is a continuation of my attempts to mystify the heartbreak in the everyday. It’s totally ok to cry, but in order to ‘cry it out it’s gotta look good. Once I’ve pulled myself up by my bootstraps and declared myself the winner of every match, it’s pretty easy to walk away from that which doesn’t serve me. Snakes may bite, but I’ll be left standing in the killer boots.”

Charleston’s Hunter Park is She Returns From War. With two full-length albums under her belt (2015’s Oh What A Love and 2019’s Mirrored Moon Dance Hall) and a third coming together in the studio, it’s easy to say she has established herself as one of the strongest songwriters coming out of the modern south. Dazzling imagery and wordplay keep her listeners on their toes waiting for what turn her tune will take. She has recently shared the stage with bands like St. Paul and the Broken Bones, Shovels and Rope, The Revivalists and SUSTO, completed a west coast tour as the opening act for Band of Horses, and was asked to open for presidential candidate Bernie Sanders as a part of his 2020 rally in Charleston. There is no arguing with the fact that Park works hard in this ever-changing industry, and with an underlying message of hope, we can see her magic hard at work as well.

She Returns From War filled us in on the background of the new song. 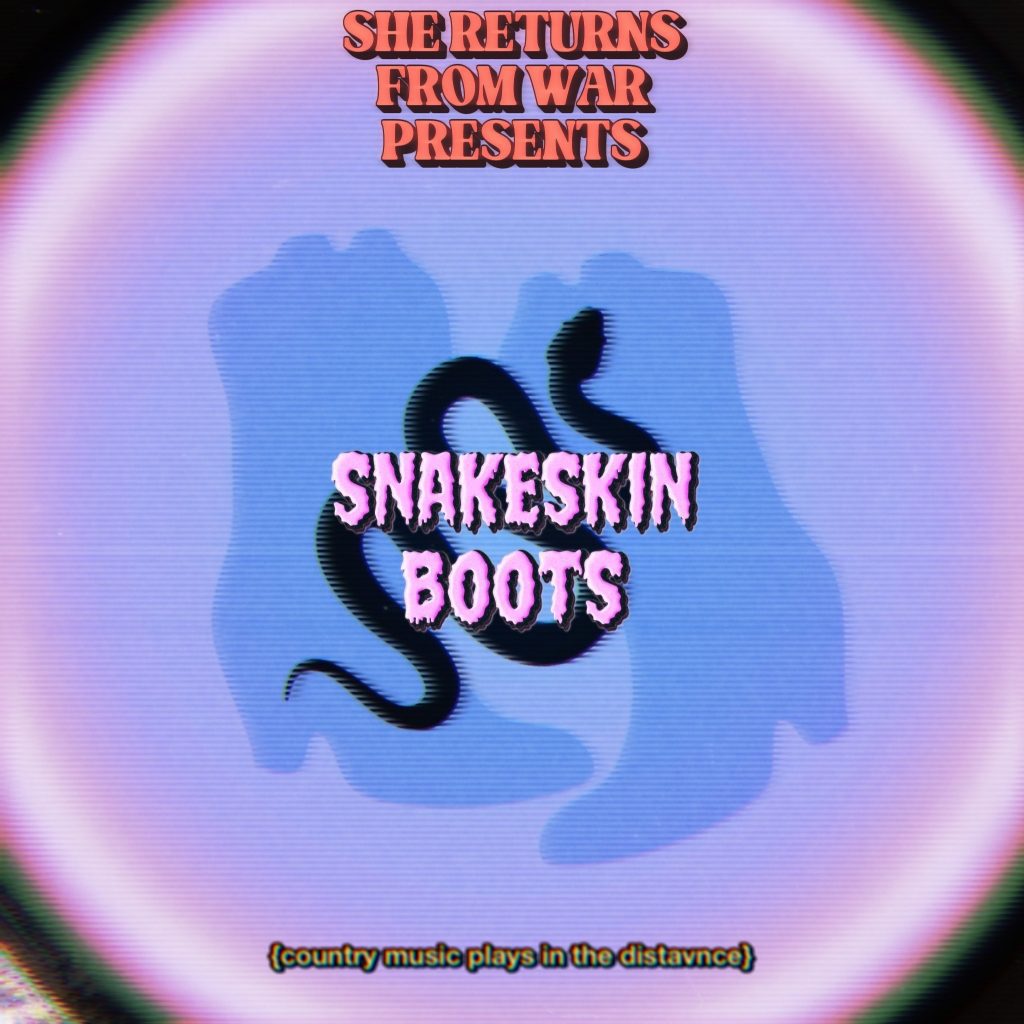 Tell us about your new single “Snakeskin Boots” and the inspiration behind it.

“Snakeskin Boots” is a continuation of a moment. The snake being a popular image for songwriters, presented the challenge of making a song unique to the way I write. On my last album Mirrored Moon Dance Hall I have a song called “snakebite.” The song is about the lasting impact of trauma in an unhealthy relationship. “Snakeskin Boots” involves heartbreak, so you may initially take this song as sad… but when you look closely, it’s about overcoming the negative step by step.

I’m so proud of the people who came together to complete this song and record. My drummer JP Chapa and I completed this song in his backyard in Charleston during the height of the pandemic as we were getting ready to do a live stream for our beloved local bar and music venue The Royal American. My producers Joel Hamilton (Mechanical River), and Wolfgang Zimmerman (Band of Horses, SUSTO, Invisible Low End Power) helped flesh out a dreamy instrumentation before we sent this song over to Josh Kaler (Hula Hifi) to add the most gorgeous steel parts. Finally mixed by Corey Campbell (Babe Club) and mastered by my friend and former tour mate this year Shelley Anderson at Black Lab Mastering.

The single is from your upcoming third album Ruthless. Please share with our fans what they can expect to hear?

Three is a big number when you’re putting out music on your own. My emo phase is a lifelong commitment, and I definitely have an air for dramatics, so when we were in the studio talking one day my producer and I came up with the genre “tropical goth country.” I love nothing more than pedal steel and strange layering, oh, and maybe a symphony.

I want people to hear my songs as a constant journey for growth. Purists will say I’m not country, but then again I don’t feel like I quite fit in anywhere. Which is OK! It’s cool to grow your own way. I want my songs to remind people that they are the main character; hopefully, I’m on your soundtrack.

I’ll always say Graham Parsons and Emmylou Harris for many reasons. Jenny Lewis, Neko Case, Lights, Sufjan Stevens are some of my favorite early inspirations because of their rich lyricism.

What are you listening to today?

When did you start playing guitar, and what gear are you currently using?

I started later than most kids, I was about 15 when my friend Charles Carmody gave me lessons. I only learned a few songs before I started writing my own.

I play a Gibson Hummingbird which has been in need of repair since our last tour. My electric is an American Professional Telecaster. My amp is a Fender Champion 100 solid-state; I used to have a twin reverb tube amp but touring with this solid-state has been a dream. I don’t use pedals—I can barely keep up with a capo. I just want the warmest tone I can get with a solid-state. This amp is great.

I also still use my Fishman Loudbox Mini amp alllllll the time—it’s a great amp for songwriters who don’t want to lug around a huge PA system. It’s so worth it.