Arielle has announced plans to globally release her new studio album titled Analog Girl In A Digital World on May 7, 2021.  The album will be distributed globally by The Orchard / Sony Music. Today, she presents “Peace of Mind” accompanied by a new music video presenting imagery captured in the studio. To view, click here: https://youtu.be/KqysgEmxT8Q

There is something magical that surrounds Arielle’s presence whether in the flesh or as captured on the masters she’s created throughout her career. Her love of the Arts was omnipresent in her life from the age of five, but the realized vision truly began to reach the ears, hearts and souls of a global audience when she began releasing repertoire independently in 2015. In some respects, she is from a past era, down to earth while connected to the discovery, exploration and dreams that were omnipresent in the lives of those from previous generations. On this new collection of songs, she has never been truer to her love of the 60’s and 70’s, and the inspiration that lives in her art from a connection to this wondrous time.  When asked how she hopes people perceive her and her art, she shares, “Like the little place in the forest you go when you need some time to just breathe…it reminds you of home and makes you feel safe, but brings you a bit of magic. And every time you go there, it comes back and stays with you for a while.”

As usual, the songs were captured predominantly with vintage gear. She surrounds herself with a plethora of tools that have over time have become a vast collection of keepsakes. As she shares, “My entire recording area I am working in is covered in old gear. Physical items. Impractical, and space-takers, but also are easier to work with. They have a smell that feels steady and wise. The old wood inspires an aura around the room that oozes soul and invites creativity.  I love looking at tape players, and physically seeing the way things work. It makes me appreciate the dynamics when they aren’t handed to me. When music was about the experience of creating a vibe around you to listen. To not soak up all the senses at once necessarily, but to take the time to listen and get the whole picture.” She continues, “When I see things now, I feel like we try too hard to be techy. Separated from a lot of the essence of what makes a human a human.  Imperfection. A bit clunky. Breaks sometimes. Unexpected, yet predictable. Fixable. You don’t just go and replace it. You take care of what you have, and are proud of it.  I don’t know. It’s those things that make me happy. The sound and warmth.”

With this approach, Arielle set out to capture a current glimpse of the impact the music and feelings the Sixties and Seventies have indelibly left within her. The album was recorded half in analogue, half in digital, utilizing three separate studios. She utilized Welcome To 1979 in Nashville, a facility that truly provides artists with a pure solution to record to tape.  Also in Nashville, she entered Michael Wagner’s studio Wireworld, collaborating with her personal friend who assisted with overdubs and tracking solos captured in the studio. The third was back in her former hometown of Austin, TX at The Bubble.  She shares, “Frenchie, who runs the room has an analog soul but records digitally. The environment and the room, simply an amazing place to create.” 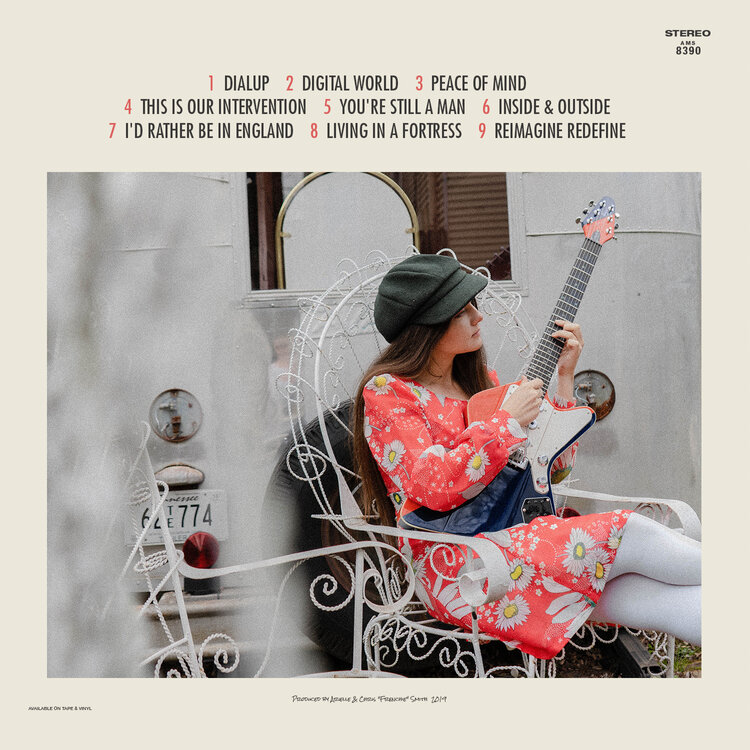 Arielle is a young woman who was born in the wrong generation. At times facing depression in being a child of the new millennium versus the boom of musically creativity that emerged in the Sixties and thrived through the Seventies. And on a broader basis, a time even earlier where things were done by hand, with a level of craft that couldn’t be hidden behind technology. She offers, “I take and protect those principles inside my music.”

And by extension, she now looks towards finally presenting the guitar she’s been creating in partnership with Brian May for many years. The instrument is a hybrid of Arielle’s guitar and Brian’s core design that the duo collaborated on with one another. Arielle shares, “I’ve been playing my primary instrument for the last fourteen years. I approached this opportunity with a clear vision of what I was after, but the experience was in many ways humbling.  We found common ground over the course of three years in development designing specs that inevitably delivered a really fine playing instrument integrating shared vision.”  For more detail on that endeavor and plans for the release visit  brianmayguitars.co.uk.

As she shares, “For the first 25 guitars sold, I will plant a tree. I have been growing trees in my office for about 3 months now starting from a seed. These are tonewood trees. The very trees we musicians cut down for our guitars that sometimes take 60-100 years to reach maturity.  I purchased an empty lot and will be planting these in Florida, so that in a few decades, they will be here protected, seen & admired. Once you break something down to its essence, it’s a lot easier to respect.  Perhaps it’s the only way to truly understand something.  After seeing how hard it is to even grow a tree seedling…I respect guitars a lot more now. How much time went into that life before it was cut down. Pretty amazing. I want that essence in the music.  Nature, Heart, Analog. Soul. Care. Love. Honesty. Flaws.  Yet, still magic (which I spell with a K).”