Alyssa Trahan is a force to be reckoned with and a killer guitarist as well. On top of her guitar skills, Trahan also produces her own music and has even dabbled in making music videos as well. Her new single, “Ain’t Ever Goin’ Back,” will be released tomorrow, June 12. The song has an edgier vibe than some of her previous work with a Miranda Lambert feel. This single is all about not backing down.

“Ain’t Ever Goin’ Back” follows her single, “My Favorite Song,” which was released in April. Listen to the single HERE.

Trahan filled us in on the inspiration behind “Ain’t Ever Goin’ Back” and a little about her background in music.

“Ain’t Ever Goin’ Back” is your new single and has such a cool, swampy vibe to it. What inspired the song?

I got the idea from a poster I have in my studio that says, “Don’t look back, you’re not going that way.” It always resonated with me. I’m a dreamer through and through, and when I go for something, I give it my all. I don’t have a backup plan or a safety net to fall back on. For me, this song is about just that, going for a dream and giving it your all.

Can we expect an album soon? If so, what can fans expect?

Yes! I’m working really hard on a full-length album I’m hoping to release later this year. My goal with the album is to showcase every part of me and my sound. It’s going to have a little of everything and definitely push some boundaries!

When I was growing up, my dad would play guitar around the house every night. He was in a band before I was born, so I think that definitely rubbed off on me! I also began writing songs when I was really young before I even knew what I was doing. I was just having fun and thought everyone came up with lyrics and melodies! Once I realized I was writing songs, I started following my favorite artists and their stories and noticed they all played guitar. So I asked my dad to teach me, the main goal being so I could write songs that didn’t just live in a sparkly journal.

As a multi-instrumentalist, what other instruments do you play?

My favorite brand of acoustic guitars is Breedlove. I’ve been playing Breedlove guitars for years now and have always loved their sound and craftsmanship. I get asked about them all the time at writing sessions and writer’s rounds in Nashville. I also love Kala ukuleles and U-Basses because they sound beautiful and are so well made! 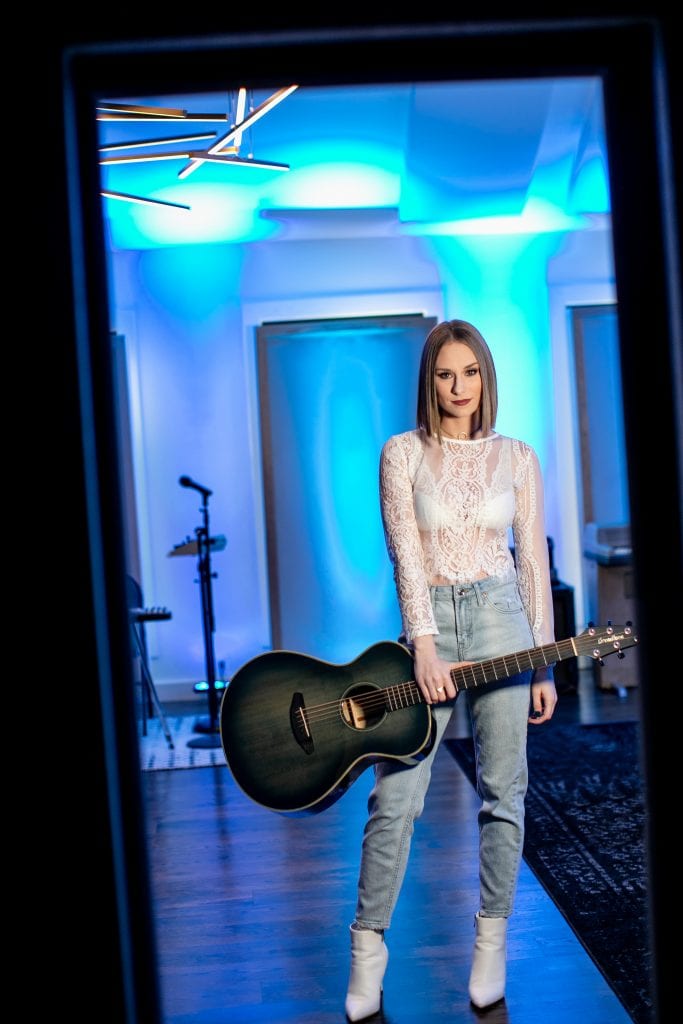 What guitars and equipment do you use while recording, and do you use anything different when performing live?

I always use my Breedlove acoustic guitars when I’m recording and performing live. My go-to’s are the Oregon Concert Rogue, Oregon Concert Burst, and Organic Collection (Wildwood Series). In terms of other instruments and gear, I like to switch it up and play around until I find the exact sound I’m looking for. But I like to keep it pretty simple overall.

How do songs come to you? Do you have a specific writing routine or sessions, or spur of the moment ideas?

Every song is different! Sometimes inspiration just strikes, and I write a song in a half hour. Other times it takes multiple sessions with a cowriter or two. Typically, I start with a general idea or hook. Then I build off of that with chords and melodies. I pull inspiration from my own life and experiences and things I see happening around me, whether it’s a friend going through something or something I saw on TV or read in a book.

You’ve been referred to as a jill-of-all-trades. One of your many talents is producing your own work as well as for other people. How do you approach producing for other artists versus your own work?

It’s pretty daunting, to be honest, but it’s so much fun! I love helping an artist find their sound and bringing their songs to life. I like it when the artist is in the room with me and we build the track together. That really puts their personal stamp on it, so it’s authentic.

Originally from New York, you made the move to Nashville to pursue music. Had you been to Nashville before your move, and how did you go about getting involved in the local music scene?

Yes! When I decided I wanted to pursue a career in music, specifically country music, I studied artists like Taylor Swift, Shania Twain, Trisha Yearwood, and they all mentioned Nashville and how it was the place to be. So I knew I had to get there. I asked my parents if we could make our summer vacation a trip to Nashville, and they said yes! So we spent a few days in the city doing all the typical tourist things. But I also did some open mics at bars and clubs. It was incredible, and I knew I had to move there someday. Years later, I asked my dad to take me to Nashville on “business trips” as I called them because I wanted to go for it, and I was ready, or at least I thought I was. He agreed, and we made dozens of trips back and forth from NY to TN. Eventually, things started happening, and I started to get some great opportunities. I was really young, so my dad would come with me if I had a writing session or meeting. And every single person we met said, “she needs to move here” or “if you’re serious, you need to be here full time.” After a few years, I finally made the move in 2016! Once I got here, I just fully immersed myself in the local scene, writing with everyone that would write with a new girl in town with no track record. Eventually, I started to find my circle of people and built a team around me. 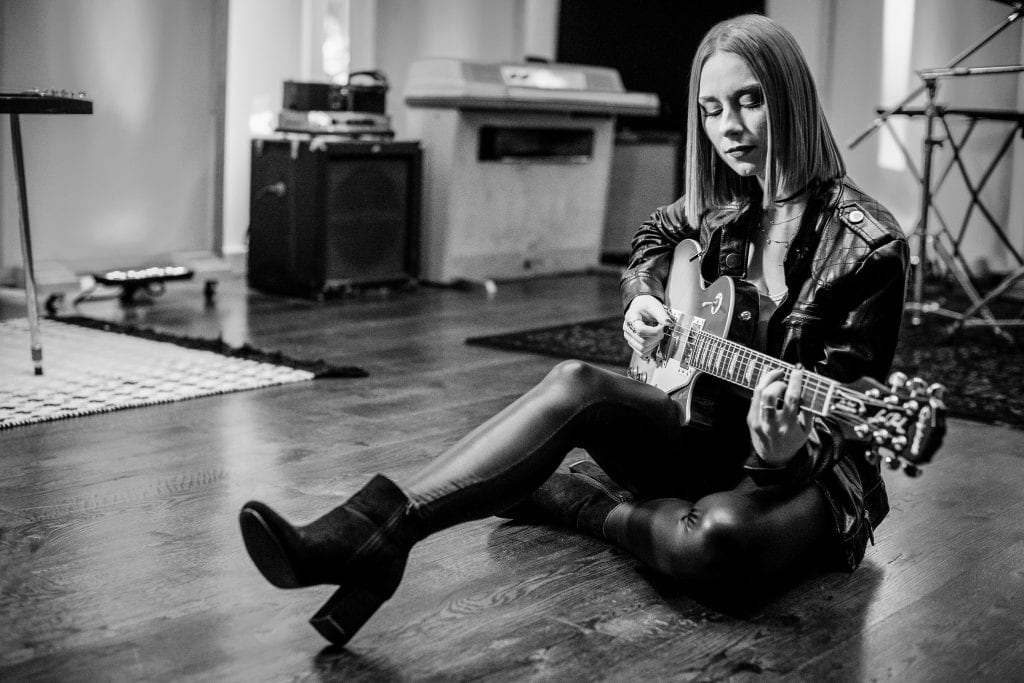 Who are some of your female role models?

I really look up to Taylor Swift; she was and is a huge influence for me. I also adore Dolly Parton and everything she does. Recently I’ve really been following artists like Maren Morris, Ingrid Andres, and Mickey Guyton, too. There’s so much girl power in Nashville, and I love it.

Your bio states you have performed in musicals. How does performing on stage in a musical compare to live gigs?

It’s definitely different! When you’re in a musical or play, you’re playing a character and have to stay in character no matter what. When you’re on stage as an artist, you have to be yourself. Both have things like numbers and setlists, and sometimes choreography, costume changes, and transitions, but when you’re an artist, the most important thing, in my opinion, is authenticity.

The effects of the pandemic affected so many, and with the cancellation of live shows, what did you do to stay connected with fans and to continue to write and record?

I’ve been doing a lot of online shows, which has really helped us stay connected! I started my “Comfy Couch Tour” when the pandemic and cancellations started, and have kept it going ever since! I go live on Facebook every Sunday at 6 pm CT, play some music, answer questions, and just hang out with anyone that wants to watch! It’s not quite the same as a big stage and people dancing, but it’s so much better than nothing at all, and I’ve come to really like doing them! It’s been hard to stay inspired when it comes to writing, and I haven’t been cowriting quite as much, but I try to make time to just sit down and write as much as I can. I’ve also been recording a ton of new songs that I already had written for the album!

Alyssa Trahan is able to blur genre lines with her modern pop production mixed with traditional country instrumentation, winning fans over of all genres. A jill-of-all-trades, singer, songwriter, multi-instrumentalist and audio engineer, Alyssa began making waves in Nashville as soon as she moved from her hometown of East Rochester, N.Y. in 2016. Just two years later, in January 2018, she signed her first publishing deal with Dan Hodges Music. Playing over 100 shows a year, Alyssa is captivating audiences with her energetic live shows opening for like likes of Charlie Daniels, Jana Kramer, Josh Turner, Lee Greenwood, Lee Ann Womack, Midland and many more. Whether it’s solo or with a full band, Alyssa steals the show. Bringing a fresh new sound to country music, Alyssa Trahan is a fresh face force to be reckoned with, follow her at alyssatrahan.com.