Leading up to the release, Megan has introduced us to some of the characters and alter-egos featured throughout the album on singles California,” a searing breakup song that’s a “gentle reminder of why it might not be the best idea to date a songwriter,” explains Megan; her superhero alter ego on the empowering “Magical Thinking”; and taking a leap of faith and going after your dreams on “Something More.” Each track was accompanied by a visual artfully showcasing each character and directed by Dan Foldes. 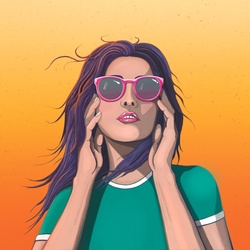