(New York, NY) With messages of healing and exploring the multiple facets of love – both dark and light – Messages from Aphrodite by Lauren Monroe will be released on September 9, 2022. In anticipation of the album, American Songwriter has premiered the new video, “Void of Course.” WATCH HERE.

The term “void of course” is an astrological term defining a state of the moon where it appears isolated as it transitions away from one planet and moves toward another. Monroe used this as a metaphor to explore the struggle of an unhealthy relationship.

“I thought it was important to explore the shadow side of love, which is painful but has gifts for us to receive…

The lyrics tell the tale of feeling void of connection and wanting to leave a toxic partner but not having the inner power to go through with it,” she explains. “In these darker textures of emotion and pain can live tremendous potential to see oneself and become stronger.”

One of the most rock-based songs on the album, “Void of Course” offers listeners a different side of Monroe, whose previous offerings have leaned more towards Americana and roots/folk. The smoldering tune is powered by Allmans-style double drumming from Rick Allen (Def Leppard) and Beth Goodfellow (Iron and Wine, Allison Russell) and topped off by Monroe’s urgent vocals. The track derives its Physical Graffiti-like exoticism from the droning of a djembe played by Monroe, further deepened by the bowed cello and upright bass of Steve Uccello (Latin Jazz Collective, Dayan Kai) and lightning-flash guitar riffs of Tyler Bryant (Larkin Poe, Tyler Bryant & The Shakedown). These sounds deepen the mood of the astrology-inspired lyrics.

Music and healing have always been focal points in Monroe’s life. Through performance, 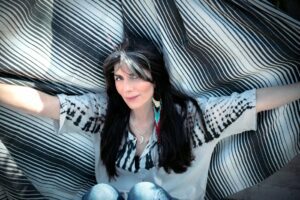 storytelling, and art, she creates an intimate experience for her audiences, showing them how music can impact healing and growth. Earlier this year, she was joined by her husband and frequent collaborator, Rick Allen, the legendary drummer of Def Leppard, for a run of intimate East Coast club dates. At every show, they welcomed dozens of Veterans and auctioned off some of their mixed-media art pieces to benefit Raven Drum Foundation, an organization they founded more than 20 years ago with the mission to serve, educate and empower Veterans dealing with PTSD and combat trauma, people in crisis and other at-risk individuals. Additional art pieces will be available at all fall dates, with donor-purchased seats available for Veterans to attend any of the shows for free. Tickets for Veterans can be purchased at supportavet.givesmart.com and will be distributed through various Veteran service organizations in each city.

In 2021, Monroe staged the first Big Love Benefit Concert, which featured performances by Billy Idol, Wynonna Judd, and the Allman Betts Band, among others. Proceeds from the event, which brought financial and mental health support to music-industry professionals affected by the pandemic, were donated to the Sweet Relief Musicians Fund. 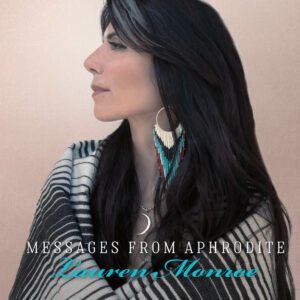 also held in 2021, the foundation has invited a group of drummers and other friends, select donors, Veterans, and first responders to join Allen and Monroe for a very special live event in Newport Coast, CA on September 26th. The drum circle will be a celebration of the healing benefits of music. The program will be filmed, and through a partnership with Musicians On Call, highlights will be included in Musicians On Call’s Veterans Day virtual concert that will be provided to VA hospitals across the country. The full 30- minute event recording will be offered exclusively to the VA from Nov. 12 – December 12, 2022 and will culminate in a live zoom Q&A call for the VA community with Allen, Monroe, and special guests on December 12, 2022. Following that, the program will be available across multiple channels and partner sites.

Acclaimed producer Jim Scott – who was at the helm for 2021’s Under the Wolf Moon – reunited with Monroe for Messages from Aphrodite, which she co-produced. “Lauren is a special artist,” he asserts.

“She’s tuned in to the spiritual workings of the heart and the mystical nature of the universe. She’s an empath, a healer, a teacher, visual artist, a producer and a songwriter…

I also think she’s a time traveler. Her songs guide, direct, and uplift and are sonically beautiful.”

Additional singles from Messages from Aphrodite:
“IF YOU WANT” | “SPARROW” | “KISS ME NOW” (OFFICIAL LYRIC VIDEO)