Home News Music News MUSTANGS OF THE WEST RETURN WITH A NEW SINGLE AND VIDEO “T-SHIRT...

Presley & Taylor Release “Have Yourself A Merry Little Christmas”

KAILEY NICOLE DEPICTS A HOLIDAY CLICHÈ IN “ONLY CALL ON CHRISTMAS”

This is as classic a heart-tugging Southern California song as anything heard since, well, the Eagles were trying to check out of the Hotel California. Welcome back Mustangs.”
—Bill Bentley

August 2018 Los Angeles, CA – California country is back, and Mustangs of the West are about to ride again with a new single “T-Shirt From California” and its video, both of which will release on August 17, 2018, via a new recording contract with Blue Élan Records. The Mustangs were an integral part of the budding Los Angeles ’80s and ’90s alt-country scene, opening for Rosie Flores, Jim Lauderdale, and Lucinda Williams. An all-female country band, they were an anomaly on the scene and their career paralleled that of the early Dixie Chicks. As band founder Sherry Rayn Barnett reminisced to Bliss Bowen of The Pasadena Weekly, “We were on a lot of the same bills just before the Dixie Chicks broke. We’d be there one week and they’d be there the next.” After seven years of gigging and touring extensively, the band broke up in the mid-90s and eventually scattered to various cities.

Twenty years later, the Mustangs are back with a name change (Mustangs of the West) and three of the original members, Sherry Rayn Barnett (electric guitar, vocals), Suzanna Spring (lead vocals, acoustic guitar), and Holly Montgomery (bass, vocals). They’ve also added Suzanne Morissette (drums, vocals) and Aubrey Richmond (fiddle, vocals) to make the fully rounded quintet. Featuring the same three and four-part vocal harmonies, the chemistry of their voices and instruments creates a powerful sound that draws on both country and rock influences.

Re-connecting in 2017, Sherry, Suzanna, and Holly rekindled their interest in the Mustang sound and decided to take it into the studio where they added Suzanne, a master’s graduate of the Quebec Conservatory of Music, and Aubrey, a native Californian who has spent the last three years touring and recording with Shooter Jennings.

The upcoming single, “T-Shirt From California,” is a sentimental song about love gone wrong, written by lead singer Suzanna Spring (co-written with Wes Hightower) and recorded at Snuffy Walden’s Taylor Made Studios. “I wrote ‘T-Shirt from California’ when I was living in Nashville and homesick for California,” said Spring. “Sitting on my couch one morning, strumming my guitar, the chorus melody and chorus lyrics came through, almost complete. I took that chorus into a writing appointment with Wes Hightower, and we wrote verses and the story. He had the idea for those great Beach Boys harmonies in the chorus, and Mustangs of the West has such a beautiful vocal blend; it was natural that we’d record this song.”

The arrangements were worked out as a band adding jangly guitars and full harmonies. “Originally the song was called ‘She’s Got Your Heart’, but we renamed it ‘T-Shirt From California’, thanks to the suggestion of Nashville journalist Holly Gleason to revisit the title,” Spring explains. “It just FEELS like California at the edge of summer, driving with the top down, Highway 1. Singing the chorus always makes me smile.” Mustangs of the West, like their wild namesakes charging back along the mesa, are ready to make their mark again. 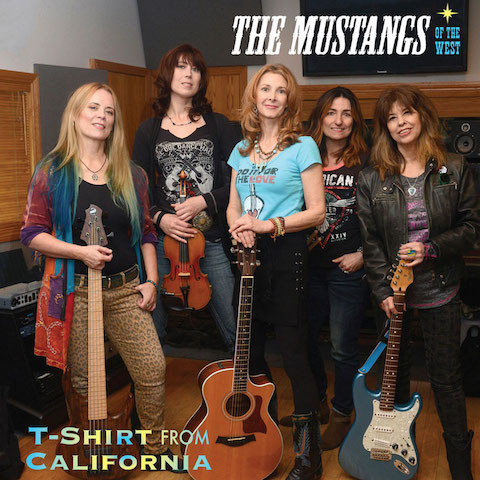 BIOS:
Sherry Rayn Barnett is a guitarist who loves anything with a good twang. Her passion for 6 strings began as a classical guitar major at NYC’s “Fame” School of Performing Arts. She continued to Los Angeles, lured by the west coast sound of classic country rock, and the opportunity to play with like-minded bands. Sherry was an original Mustang in the group’s first incarnation and is the founder of the newly reunited Mustangs of the West.

Suzanna Spring: “I’ve always been drawn to outsiders,” says this classically trained musician and prolific songwriter who grew up on both coasts, many parts in between, and now call northern California home. Discovering Steve Earle, Tom Petty, and Lucinda Williams inspired a writer whose poetry, melodies and haunting vocals seem to embody longing and the quest for home.    Suzanna worked as a staff writer and artist at Bluewater Music in Nashville, where she wrote “T-Shirt From California”. An original Mustang, she is currently writing and recording again with Mustangs of the West.

Holly Montgomery first began playing as a Mustang during the mid-90, and now plays bass, sings and writes for the Mustangs Of The West. She is a multi-instrumentalist originally from Kentucky and is currently very active in the DC/Mid-Atlantic area doing live shows with her band and other live and session work. Holly is equally comfortable rockin’ out or adding melodic bass lines to a hardcore country classic.

From the small Canadian town of Chicoutimi, Suzanne Morissette’s family migrated to Quebec where she began studying music earnestly, focusing her energy on drums and percussion in her teens. As a master’s level graduate of the Quebec Conservatory of Music and honors graduate of Hollywood’s Percussion Institute of Technology, she met bassist Holly Montgomery, and together they played all over Los Angeles, reuniting this last year to form the rhythm section for the Mustangs of the West.

West coast born and raised, Aubrey Richmond is a California native who grew up playing fiddle, classical piano and riding horses amidst the woods and rivers of Northeast Washington State. Her love of music finally led her to Los Angeles where she’s spent the past 12 years building her career as a professional live & studio musician, and the last three of those touring and recording as the violinist/vocalist for Shooter Jennings. A big fan of horses and all-female bands, she is honored and excited to join the MOTW line-up!