Longtime friends, Mandy Morgan (NASALROD, GENERAL ELECTRIC) and Allisa Beymer (SUKEY TAWDRY), from Portland, Oregon, make up the dream-pop/indie-folk duo Time & The Bell. The duo is releasing their debut album, O Solferino, on October 16 via Nadine Records. Today, we’re pleased to premiere the single, “No Harm,” from the upcoming album.

The duo worked with engineer/producer Adam Lee (Built To Spill, Portugal. The Man, Decemberists) to bring their ten-year vision to light.

“Allisa and I bonded early on over the fact that we both had a religious upbringing, and that pretty much the only thing we really appreciated about ‘growing up in the church’ was all the singing. “No Harm” is meant to have the stripped-down, meditative feel of a hymn, and we enlisted a choir of friends to sing backing harmonies with us. The lyrics are about recognizing another, even an enemy, as not separate from yourself. I think of it as a song of forgiveness.” ~ Mandy

The duo shares with us their background in music, influences, and songwriting process.

Your debut album, O Solferino, will be dropping on October 16 via Nadine Records. What was the inspiration behind the album?

Allisa:  This album is the classic heroine’s journey to the underworld and back. There is a lot of call and response to the melodies, echoing the album’s dual message of grief & redemption.

For our readers who are not familiar with you, how would you describe your music?

Allisa:  Time & The Bell loves to live in the liminal space between dreams and waking life; if there is a harmony or mystical quality to conjure, we will weave it in there.   We’re that cathartic crying spell that spirals into the most peaceful & sweet sleep.

Mandy:  Dreamy folk-pop inspired by the closely interwoven harmonies of the Everly Brothers, the chamber pop experiments of Björk, and the lyrical intimacy of Elliott Smith.

Allisa:  Journaling plays heavily into the songwriting process for both of us; Mandy will record little snippets of riffs and lyric structures on her handheld recorder or phone (even in the car!). Since I have a small child now, I have to get creative with how/when I write. The shower has become a favorite spot, so that says a lot about my privacy levels at the moment! We love taking inspiration from found sounds—we even snuck in some frog and fire sounds from when we lived at the Grand Canyon into one of our tracks on O Solferino.

When did you first become involved in music?

Allisa:  In the womb! Both my parents are musicians and composers. They had me up and singing in front of the church before I can remember—there’s a picture of me standing up on a chair so I can reach the microphone while singing the high harmony with my family when I was around three.  I was raised with classical and jazz influences, sang in multiple choirs and vocal groups, and competed vocally as a student. Growing up in the ’90s in the northwest, it was hard NOT to be exposed to the Riot Grrrl scene; I got to experience the punk scene through Mandy and her band (Berzerk) during college, and after that, it was always one of my dreams to be in a female-centric band! Mandy and I had some amazing and strange opportunities to perform while traveling through Europe: busking at a farmer’s market in the Pyrenees, singing to fellow pilgrims on the Camino de Santiago, an impromptu appearance at a music festival in Iceland, and to a packed restaurant in Kiskunmajsa, Hungary. After returning to Oregon, we spent our first years in a 3-Piece (Sukey Tawdry) that had its humble beginnings playing house shows around Portland; we ended up touring the West Coast, and our final show was playing the CoronaFest in Mexico City, headlined by Iggy Pop. Mandy and I have been playing music together for over half our lives now, and our style has certainly mellowed from the earlier days—our music has become a safe space for us to process pain, heal, and embrace the present moment.

Mandy:  Music has always been really important to me. I feel like I figured out very young that listening to certain songs could alter my mental state. I constantly made up awful songs and horribly embarrassing raps as a kid and recorded them on my boom box. I started going to shows and playing bass in punk bands in high school and beyond, but I always seemed to have a secret stash of more intimate songs I would be recording on my bedroom 4-track that I never shared with anyone. I would classify these Time & The Bell songs as falling into that category, but I’m finally comfortable putting them out into the world because singing with Allisa bolsters my confidence and makes me feel like I have superpowers.

What gear are you currently playing, and why?

Mandy:  My main bass right now is an El Degás, which is a ’70s Japanese knockoff of a Fender Telecaster bass. I like it because it’s super lightweight but has a great tone and feel.

Besides playing music, what other hobbies and interests do you have?

Allisa:  I am a full-time mama to a four-year-old during a global pandemic; life is currently distilled into modeling how to be a decent human being.  I also love to cook, bake pies, and float in bodies of water. 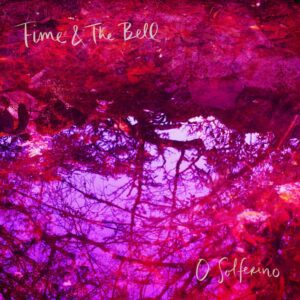