We are pleased to bring you the music premiere of the new track, “Swan (Duck) Song,” from the upcoming album, I Can Still Hear You, by Suzzy Roche and her daughter Lucy Wainwright Roche. The album will be released on October 30 via StorySound Records. Suzzy and Lucy went to Nashville last spring to produce their third album together, I Can Still Hear You, with producer Jordan Brooke Hamlin. Suzzy’s sister’s passing in 2017 along with her feelings about the social disruption caused by the 2016 election influenced many of the songs. While recording the album, COVID-19 struck, and they were forced to return to New York, where they finalized the recording of the album remotely.

“For a time, I thought I’d write a song called ‘Swan Song’ to commemorate the end of my creative life (which I’m always fearfully anticipating). This popped out one day, and I was surprised, but I liked it because it turned out to be about things changing instead of things ending.  I particularly enjoyed figuring out the guitar part on this song. The parts fit together like a little puzzle.  Since we can’t perform live these days, I wanted to get together with some other musicians and experience the joy of playing. During the pandemic I miss performing, as I’m sure most musicians do, and this was a way to have a bit of fun, and to share some live music with our listeners.”
—Suzzy Roche

What was the songwriting process for this new music?

I had written a bunch of songs over the last three years, and as often happens, some of them seem to go together, but not all of them. When I started to see which ones fit together, I kept myself open to which other songs might compliment them. I always like to add cover songs to a project because I think it creates diversity. Also, I wanted Lucy to write a song or two. Usually, she keeps her songs for her solo albums, but on this album, she threw in “I Can Still Hear You” and we co-wrote “Get the Better,” which is the first time we’ve ever written together.

What can our readers expect to hear on your upcoming album?

I hope listeners will hear some great singing, some interesting songs, and cool arrangements. There are also twelve creatures on the record, and they give it a bit of a fairytale feel. But while the record has a whimsical side, the songs are weighty. There’s an unapologetic sadness there too. But it’s strong,

I’m not sure what listeners will take away; perhaps I’m too close to it to know. But we have a very vital relationship with our listeners; we care about them, and we want to put something special into their hands. It’s a hard time for many people right now, and we want our music to help.

It’s been tough times, to say the least, quarantining during this pandemic. What have you been doing to continue your music and to stay connected with fans?

You’re right about it being a tough time. Of course, all our gigs were canceled, which is stunning  Social media helps to stay connected for sure, but it’s strange to have a new record and not be able to go on the road. I miss traveling around and playing live; sometimes, it makes me terribly sad. And I worry about whether live music will ever come back. But everyone is in the same boat.  I have a pretty rigorous daily routine of practicing. Over the years, I’ve learned that I have to stay in touch with my own muse, or else she’ll visit someone else. 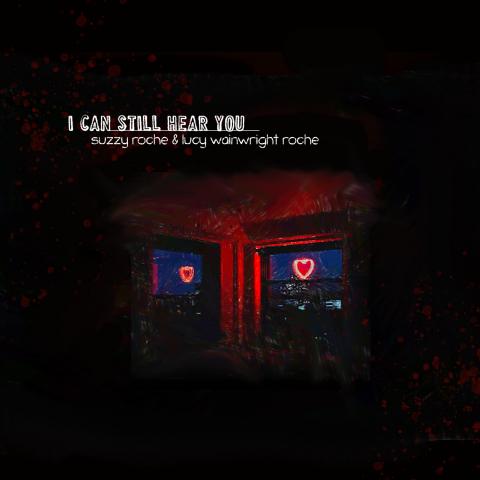 Recorded from their New York City homes during the quarantine, this 11-track album, due October 30, showcases soul-searching, thought-provoking originals, and perfectly chosen covers,
along with guest appearances by
Amy Ray and Emily Saliers of the Indigo Girls

In a recent press release, Suzzy commented that while finalizing the album, she at times she felt like giving up because of the pandemic stating, “like, why bother, the world is coming to an end.” However, she credits Lucy, Jordan, Helen Vaskevitch (assistant engineer), Stewart Lerman (who wound up mixing the record), and Dick Connette (StorySound Records) with keeping the project going. “Although this wasn’t the plan we originally made, and although it was trying at times,” Lucy shares, “We made it work and I actually think this is my favorite of our duo recordings.”

Press Release on I Can Still Hear You:

I Can Still Hear You, conceived out of personal loss and turmoil, arrives at a time of global loss and turmoil. The 11 thought-provoking tracks explore themes of good and evil, youth and mortality, the absurd and the serious, the real and the imagined, and the connection between what is present and what is gone. Each of their albums together have documented a specific time and this one, according to Suzzy, “probably is the darkest, but at the same time, it’s the most fanciful too. This time, there seemed an extra urgency about it.”

“I Think I Am a Soul,” which features Indigo Girls’ Emily Saliers on guitar, stands as one of I Can Still Hear You’s cornerstones. On it, Lucy’s gossamer vocals convey the song’s ponderings of life, aging, and what lies beyond. “Ruins” and “Joseph D” delve deep into the question of “why’s a human heart so mean?,” which is asked by the destructive young boy in “Ruins.” The latter tune, about a cruel misogynist, is marked by curious child-like details (Joseph sleeps with a teddy bear and wants a lollipop). Suzzy says that while “those images are jarring, but, for me, they ring true. You run the risk of not being taken seriously though, but I am dead serious.”

“Little” and “Swan Duck Song” epitomize Suzzy’s interest in how a child’s imagination contains both playfulness and terror. An ode to the children’s book character Stuart Little, “Little” isn’t a cute tune but a rather harrowing journey that ultimately is about perseverance (and contains the marvelous couplet: “Look at me now, I hardly exist/The song I sing can’t even be shushed.”). “Swan Duck Song,” similarly, uses its deceptively simple fable-like setting to tell a sobering story about waddling your way through despair to get to a better place.

Animals — around a dozen of them — appear throughout I Can Still Hear You, including the amazing cover of Connie Converse’s “Talkin’ Like You (Two Tall Mountains).” The haunting tune, which balances sadness and whimsy while discussing loss and loneliness, fits seamlessly with the album’s like-minded originals. As Lucy notes, “It’s funny how songs gather together in ways that you don’t even notice until they are on a recording together.”

Two other covers, “Factory Girl” and “Jane,” deliver portraits of undervalued women as well as offering nods to The Roches’ past. “Factory Girl,” a traditional ballad that appeared on The Roches’ 1980 record Nurds, features Indigo Girls’ Amy Ray on this version. Singing this song is something special for Lucy because she grew up listening to The Roches do the song and has performed with the Indigo Girls in recent years. “Jane” is a previously unreleased Maggie Roche song that Lucy has long loved and wanted to record. “It seems very appropriate that this version found a home on this album,” she says, as it addresses I Can Still Hear You’s themes of exploring the here and the gone, and the connection between the two.

I Can Still Hear You’s final cover, and the album’s final song, is its best-known tune, “Bein’ Green,” of Sesame Street fame. Suzzy admires how the tune’s “child-like, open honesty is radical,” while Lucy calls this Joe Raposo-penned composition the perfect closing number because it is “ a bit strange and funny and sad” just as the album is.

Fittingly, the title track is the one song that was wholly written during the quarantine. The track, Lucy’s only solo composition here, is composed of thoughts that came to her during this strange, unsettling time. “I was thinking a lot about the veil between what used to be and what is and about links that still exist, even when circumstances have drastically changed or when people have died.”

“Get the Better” is the other track written during the pandemic, although it was started years earlier. A dream-like tune, swirling with ghosts, angels, and thoughts about mortality, represents the closest that Suzzy and Lucy have gotten to co-writing a song. Lucy began it 15 years ago and has been rewriting the tune, unsatisfyingly, since then. During the quarantine, she handed it off to her mom, who — as Lucy readily admits — “turned it into what it should be.”

I Can Still Hear You marks the third collaboration between Suzzy and Lucy, following 2013’s award-winning Fairytale and Myth and 2016’s acclaimed album, Mud & Apples. Even though Suzzy has had a long, storied career — which includes the beloved Roches, solo work, acting, and writing — she says that she wouldn’t be singing anymore if she wasn’t singing with Lucy. “I’ve always preferred harmonizing to singing solo. I hear melodies with harmony, more like a choir than a lead singer and background singer. To me, Lucy’s presence is essential to balance mine. It’s just more fun to do it with her — and interesting.

Over the past dozen or so years, Lucy has racked up critical accolades and a loyal, ever-expanding fandom through her solo work and live performances. Besides teaming with her mother, Lucy also has done an album with her half-sister Martha Wainwright and performed with various other members of the Wainwright family as well as such acts as Indigo Girls, Mary Chapin Carpenter, and Neko Case.

I Can Still Hear You stands as a special project for both Lucy and Suzzy. “In a time when so many people are suffering,” Suzzy confides, “you hope that you can put something out into the world that will comfort, not in any saccharine way, but in the truest way you know how to.” Lucy adds, “I think the impact of this time on the music and on us remains unseen in some way. It’s still unfolding, but it feels like a mysteriously timed project and I really am glad to get it out into the world.”