Today, we’re pleased to premiere the new single “Against The Wall” from Nashville singer-songwriter Mabilene from her upcoming debut album, The Other Side, scheduled to drop in November. While this is Mabilene’s debut album, she is no stranger to the music scene from her time with the acclaimed folk group The Battlefield. The album was recorded with Jordan Lehning at his East Nashville studio, The Duck.

I wrote this song as a love letter to a musician I met back in 2014. We were working the same event and ended up on stage singing together. It was electric and we spent the rest of the night drinking whiskey and hanging out in the hallway between our hotel rooms. We lived on opposite coasts, and I wanted to speak to that sudden lightning bolt of connection.

“Save the single on your favorite streaming platform”  https://mabilene.fanlink.to/againstthewalll 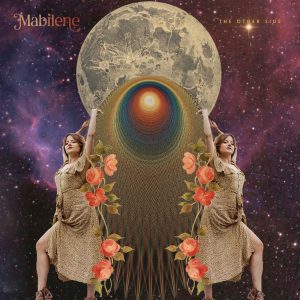 Tell us about your new debut album, The Other Side, which is set for release in November? What can fans expect?

Absolutely! I recorded The Other Side with Jordan Lehning at his East Nashville studio, The Duck. I stumbled upon a record he had produced and asked him to meet me for lunch. It was immediately clear he was the right choice to help craft the songs I’d been writing for my debut. In the studio, he was like a mad scientist. The process managed to be both disciplined and playful; structured and experimental. And I think that really comes across on the record.

Expect a lush tapestry of sounds both reminiscent of old wrecking crew records from the ’60s and freshly grounded in modern Americana.

We’re pleased to premiere your single from the album, “Against The Wall.” What was the inspiration behind the song?

I wrote this song as a love letter to a musician I met back in 2014. We were working the same event and ended up on stage singing together. It was electric and we spent the rest of the night drinking whiskey and hanging out in the hallway between our hotel rooms. We lived on opposite coasts, and I wanted to speak to that sudden lightning bolt of connection. 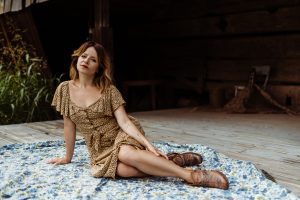 I think the lyric that speaks most to me (and often stands out to listeners as well) is I learned to blossom slow. I learned to blossom slow. There’s just something about the permissiveness in that line. It’s okay to take your time; to grow at your own pace. It’s tempting to constantly compare ourselves to others and their progress. It’s easy to get focused on the milestones and hitting the right mark at the right time…and as a woman, the right age. Who decides these things? The truth is that I’ve always been both a strong-willed and sensitive soul. Giving myself the space and time needed to let things unfold at their own pace has made all the difference.

Will you be touring in support of your new album?

At some point, I hope to. Fingers crossed. At this point, nothing is booked. I was in the early stages of mapping things out and placing holds when the Delta variant took center stage. As a small indie artist launching a new project, I’ve had to make some tough choices in terms of where my energy is spent. Touring has been unstable. But I’m an artist who loves touring, so I look forward to getting back to it when possible.

About The Other Side courtesy of artist

A soulful siren born and raised in Houston, Texas, Mabilene weaves lush tales of love, heartache, and self-discovery in her Jordan Lehning-produced debut The Other Side. Born out of the ashes of her former folk band The Battlefield, the album reflects the many facets of Nashville – equally rooted in modern orchestral Americana and retro country-pop. Effortlessly beautiful vocals, recalling Linda Ronstadt at one turn, Margo Price at the next, take center stage in the 10-song collection, set to exquisite strings and boosted by an expert rhythm section.

Surrounded by country and top 40 pop music as a child, Mabilene’s parents’ record collection introduced her to the legends she now cites as influences: Linda Ronstadt, Dolly Parton, and Emmylou Harris. Their songs, along with her father’s love for Springsteen’s Born in the USA and The Beatles’ Rubber Soul, inform the writing and production on The Other Side, as chamber arrangements meet pop sensibilities for a stunningly rich tapestry of sound that exudes a depth and maturity rarely present in a debut album.

Paying tribute to the past while sounding fresh and modern isn’t an easy task for a songwriter, yet Mabilene and band manage to do so flawlessly on The Other Side, thanks largely to the steady yet innovative hand of Lehning, whose production credits also include Rodney Crowell, Jessie Baylin, Andrew Combs, and Elise Davis. As Mabilene recalls, working with Lehning was a dream that seamlessly came to fruition after she contacted him upon hearing his work on Lydia Luce’s sublime album, Azalea. “With Jordan, there wasn’t a lot of ego present,” she says, describing the recording process at his “The Duck” studio in East Nashville as experimental and playful, with Lehning serving as a “mad scientist” of sorts, nurturing Mabilene’s ideas and expanding on them with unexpected yet meticulously placed flourishes such as oboe (played by Grace Woodworth) and French horn (Jennifer Kummer). “I think that’s why my music sounds like it does,” Mabilene notes, crediting Jordan’s deliberate touches, along with her own fondness for the Wrecking Crew collective of musicians who contributed to a multitude of hits in the ’60s and ’70s.

Album opener “Against the Wall” serves as a fitting introduction to both Mabilene as a songwriter and as a human searching for connection. Believing she’d “regret every word that goes unsung,” she beckons her object of affection to join her in her topsy-turvy travels, but cautions that the walls she’s learned to erect can be a bit of a challenge to navigate.

“I could be a soothing rain
… But desire is like a loaded gun
It feels so good at night, but I’m bled dry when morning comes
So I learned to keep it all inside
So it’s hard to touch the secrets that I hide”

Describing herself in the song as one who “learned to blossom slow,” Mabilene notes that’s the case with most anything she’s been involved in; “Everything has taken me longer than what society expects, and that’s actually what keeps me going – there’s always that voice in your head that says ‘you’re this age, and you’re not there’ … that’s just never been true for me,” she says, noting that writing that particular lyric helped her realize taking your time with things is not only acceptable, but even something to be hailed as a strength.

This introspective, intentional mindset is evident throughout the album – Mabilene consoles a wounded friend, encouraging her to step out of the shadows and make her voice heard in the catchy “Carolina;” reminds herself that she’s worthy in “Running Circles;” and delivers a sweet, sincere testament to true love in “Partner in Crime.” Things get a bit more contemplative in “Old Magnolia,” an acoustic-led meditation on generational trauma and familial expectations. The perfectly paced waltz leads nicely into a nostalgic, bittersweet visit back to the West Coast, as standout “California” is not so much a love letter to her former home as it is a means of saying goodbye. As Mabilene, now based in Nashville, explains, “Every time I’d come back home after spending time on the road, as we would drive into [Los Angeles], I’d begin to feel my world getting smaller and smaller. A city that had energized me in the past was now draining. One autumn day as I was walking my dog, I started singing this song. I packed up and left a few weeks later.”

Sprinkled amongst the originals are two covers that reflect Mabilene’s roots as well as her vocal aptitude – a beautiful take on “Keep Me From Blowing Away,” written by Paul Charles Craft and made popular by Linda Ronstadt in 1974, and Nancy Wilson’s Grammy-winning hit “(You Don’t Know) How Glad I Am.” The latter in particular is an ambitious undertaking that shows Mabilene and band at their very best; crystalline vocals are buoyed by steady rhythms, and the string section delivers a dreamy accompaniment that swoops and swells in all the right places.

“Another Vanished Year” is the album’s apt closer; the cinematic fade-in makes way for Mabilene’s pristine vocals, establishing a lovely setting before unveiling a sense of resignation.

“A rose quartz gold lights up the sky
The palm trees frozen deep in time
You thought today your dreams would meet you here
But like the sun, that hope just disappeared”

Glockenspiel and strings lighten the mood a bit, and Mabilene reminds the listener that despite the clouds, “the sun is always shining in the sky somewhere.” Nonetheless, accepting the present means also acknowledging that suffering can feel all-consuming. When she sings, “until then, you’re stuck here in your vanished years,” one might assume she’s referring to the past year-and-a-half or so, but she actually wrote the song in 2014 for a friend going through a divorce. As she explains, the song now serves as a sanctuary of sorts; “Having gone through 2020, it turns out it was a gift to our future selves.” It’s quite the gift for the listener, as well.