California native and multi-instrumentalist Laura Mihalka is no stranger to music as her grandmother was a prolific composer and pianist who was raised in Hollywood, CA. Mihalka began playing cello when she was nine and has had the chance to perform with artists Kenny Loggins, Alex Ebert from Edward Sharp and the Magnetic Zeros, Todd Hannigan, Jennifer Terran, Angela Shelton, Delaney Gibson, Gina Villalobos, and more. Mihalka is releasing her second studio album, Feels Electric, on September 17, 2021, with the Grammy award-winning artist and producer Jesse Siebenberg (A Star Is Born, Ke$ha, Promise of the Real, etc.). Today, we’re pleased to premiere the title track from the upcoming album.

“Feels Electric” was about the 9th song I sent to Jesse (Siebenberg). At first, I felt a little embarrassed by it. I made an excuse for it to Jesse—’It sorta sounds like it could be in a musical, a little cheesy.’ But it ended up becoming probably both our favorite one. I particularly like this lyrics on this one: About having all kinds of colorful people in your life who you may not agree with, who may be exhausting, but it uses the words Feels Electric for the trail of energy that person leaves behind. Is it good? Is it bad? It just is what it is….I also love how Jesse added some moody wind effects to this one. 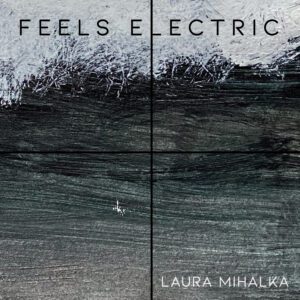 Tell us about your new single, “Feels Electric.”
“Feels Electric” is inspired by my favorite songwriters: Elliott Smith, Paul McCartney, and Father John Misty. The lyrics are about a crazy friend who is endearing but exhausting. “The air still feels electric” (after she leaves the room). When I sent the raw song to the producer, Jesse Siebenberg, I was a little embarrassed and said “It kind of sounds like a cheesy musical.” But he completely made it awesome with brilliant production and instrumentation. It is now both our favorite song on the album, which will be released September 17, 2021.

What was the writing and recording process?
I wrote the song at home during the major lockdown part of the pandemic. Like many other people, my mindset changed during this time. I felt completely justified to take as much time as I wanted or needed to write music. I recorded it on my keyboard and sang “scratch vocal” track. I sent it over to Jesse, where he worked on it at his studio. He sent back the final instrumental version (Which he nailed the first take!), and I sang the “real” vocals over that. We used my original keyboard back. Super fun process! I love having the flexibility to take my time to record parts of it at home.

Laura was the lead guitarist and backup vocalist for the female-led band, Liquid Sunshine, who toured the West Coast and was the supporting act for Steven Stills, Frank Black the Mother Hips, Dishwalla, and more.

In October 2021, Channel Islands Chamber Orchestra of Ventura County is set to premiere her composition, “Springtime at Stanwood.” which is a three-movement classical piece, inspired by hang gliders who launch themselves off Gibraltar Mountain in Santa Barbara, directly above her house.

In 2008, she and her husband founded an internet advertising company, Underdog Media, that resides in the “Funk Zone” of Santa Barbara, CA. She remains active in the music scene in Ventura and Santa Barbara: cello in the Channel Islands Chamber Orchestra and the Santa Barbara Folk Orchestra, string arrangements and studio work, and whatever creative projects are thrown her way.