Rocker and Guitarist Erin Coburn released her new single, “The MiSFIT,” for pre-save on June 30, 2020, and will be following up with a music video in the coming weeks. The song will be available on all streaming and downloading platforms on July 24th. The song has been described as “the perfect anthem for every independent soul” and “the modern version of an ’80s female power ballad that features alternative rock ‘n’ roll style with intermittent soul and indie rhythm.” Erin played all the guitar on her track.

Listen to “The MiSFIT”:  HERE

“I have NEVER fit in. I was a strange kid and I still am. I wasn’t sure whether to think of being a misfit as a good thing or not. As I’ve grown away from high school and the constant feeling of being pressured to fit in. I wish I would’ve realized that when I was younger, but I wrote this song for those who felt the same as me. I want to remind people who feel like they are different that being “weird” or “not fitting in” is cool af. Screw fitting in. The MiSFITS are the people that pave new paths for the rest of the world.” – Erin Coburn

Coburn fills us in on the inspiration behind “The MiSFIT,” her band, guitar gear, and more!

“The MiSFIT” is your new single set for release on July 24. What inspired the song?

I have never fit in. Ever. From all twelve years of school to the moments outside of school, I was always the odd one out. “The MiSFIT” was inspired by the realization I had that not fitting made me who I am. I think doing your own thing and being a “misfit” is what makes someone truly “cool” and truly unique. I used to believe that being on the outside was a horrible place to be, but after years of trying to squeeze myself into the box, I took a step out and never came back in. That is what inspired me to write “The MiSFIT.”

The accompanying music video for “The MISFIT” will be released in a couple of weeks. What can fans expect?

The music video for “The MiSFIT” is something I am super proud of because I wrote it, directed it, filmed most of it (with the help of my talented boyfriend), edited all of it, and starred in it. So fans can expect a vision that came directly from my head to the video with no middle man in between.

Tell us about your band members.

My band consists of a bass player and a drummer. My bass player’s name is Jack Ryan, and he is one of the most talented and dedicated people I have ever met. He plays a mean bass, and I swear he could have his own comedy show. His Instagram, Facebook, and YouTube is @jacktheripperbass. My drummer’s name is Brandon Pettiford. Brandon and I have been friends for a LONG time. I knew he was an incredible drummer, but I never thought he would play drums with me since he lived in Columbus and I lived in Northern KY at the time (2 hours away)—but I realized two hours is nothing because Brandon’s drumming is INSANE! His drum page on Facebook is @brandonpettiford, and his Instagram is @buddy_47.

How do songs come to you? Do you have a specific writing routine or sessions, or spur of the moment ideas?

Songs hit me straight in the face sometimes. I do not have specific writing routines, but I write every single day. I tend to get a lot of ideas when I am practicing guitar or talking on the phone. I find phone calls are amazing for drawing lyric inspiration from. If I don’t feel inspired on any day, I will do exercises such as writing a song from a random Wikipedia page or asking one of my friends to tell me a story.

My dad had a guitar sitting around the house before I was even born, but he never played it. So when I came along, I found it and claimed it as my own. My parents have videos of me at two years old playing my dad’s GIANT acoustic Yamaha guitar. It looked like I was playing an upright bass! I got lessons when I turned seven, and I NEVER practiced what my guitar teacher gave me. I was a bad student because all I wanted to do was write my own songs and come up with my own riffs. It’s always been hard for me to bring myself to learn someone else’s song note for note, and I like to think that is the potent songwriter gene in me.

As a multi-instrumentalist, what other instruments do you play?

Besides guitar, I play electric ukulele (with a whammy bar), bass, and the vocal cords. I am currently learning piano from my good friend Ben Levin and will be taking drum lessons from my drummer, Brandon. 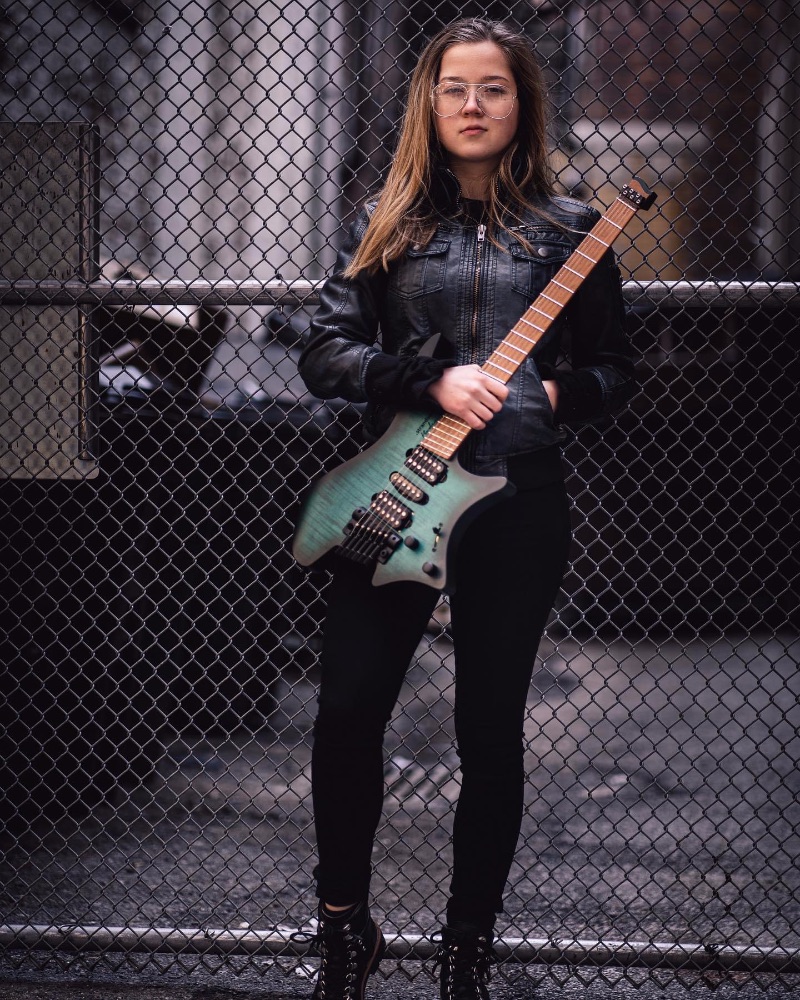 Speaking of instruments, what brands do you play, and why?

I am sponsored by Strandberg Guitars. I played a Strandberg for the first time at NAMM this year, and it BLEW ME AWAY. I kept walking past the booth and thinking, “those look interesting.” I sat down and played one, and I didn’t want to leave the booth. My dad had to pry me away. I later found myself in contact with Ola and Ed at Strandberg after I drove six hours in one day to play Strandbergs at Sweetwater for three hours. These guitars have a unique, extremely comfortable trapezoidal neck shape called the EdnurNeck, which is one of the main reasons I loved these guitars so much. The natural acoustics of these guitars unplugged are ridiculous too. They have a dominantly metal audience, but I want to show the world that Strandberg makes the world’s most versatile guitars. I also play a Joyner Instrument’s Uke. Adam at Joyner designed and made my custom ukulele with a whammy bar! I am endorsed by Bad Cat Amps because they work so well with my Strandberg in achieving a wide array of tones for the broad sound of my music.

When choosing an instrument, what do you look for in terms of tone?

What guitars and equipment do you use while recording, and do you use anything different when performing live?

I use my Strandberg guitars, my Akai Professional LPK 25 MIDI controller, a Rode NT-1A condenser mic, Archetype Nolly Amps, Bad Cat Classic Deluxe Amp, and my MacBook Pro. I run my sessions through Logic Pro X. For live performances, we use an X32 and Westone Custom In-Ear Systems. I run through my Bad Cat Amp Classic Deluxe with a BlackStar Cabinet. I also run my guitar through a pedalboard for live performances, which includes a Polytuner, CryBaby Wah, Tube Screamer, Micro Pog, SP Compressor, TC Electronic The Prophet Digital Delay, and a Ditto Looper (that I use for writing and solo performances).

One of the recording techniques I use in the studio is doubling (or even tripling) the same vocal parts. This makes the vocals in certain parts of the song, such as the chorus, really hit hard.

We tend to change our tones and sound based off of the venue we are playing in. We want to serve the mood and room. We are a dynamic band.

My practice usually starts off with a warmup to get my fingers flowing and some hand stretches. Then, I move on to theory and scales. I have been working on more theory lately so I can expand my solos and take the listeners on a new adventure each show. I also practice singing with my guitar to keep both of these instruments in sync, and the band and I also rehearse together at least once a week.

My early musical influences were BB King, John Redell, Alice N Chains, Nirvana, Neil Young, Johnny Cash, Heart, and Joe Satriani. I remember my dad sitting me down to watch an entire Joe Satriani show on Blue Ray when I was really young—and I watched it again and again after that first time.

What music are you listening to today?

With the cancellation of live shows because of COVID-19, what have you been doing to stay connected with your fans?

Can we expect an album soon?

I am working on new songs for the next album, but my main focus is on more singles right now.