January 18, 2022 – Guitar sensation Malina Moye  is thrilled to release her new single “Say My Name” along with the music video directed by filmmaker Marc Fusco that premiered on American Songwriter. “Say My Name” is off her forth coming album Dirty which is set to be released on March 17th via WCE Records. Produced By Bjorn “Polarbear ” Soderberg  (Neyo, Kendrick Lamar, Nikk SIXX) Malina and PolarBear deliver an infectious  groove that incorporates her signature sound of  Pop, Rock, and Soul. It’s a high energy  power anthem that is lyrically filled with hope, inspiration and the soulful will to triumph then is rounded out with a Prince-esque blues rock solo.

Malina says, “Saying a person’s name forces you to understand someone’s story and view them as a person and not just as a number or a hashtag.”

In December, Moye left an indelible mark at US Bank Stadium in Minneapolis, performing the national anthem at the biggest comeback game in NFL history between the Minnesota Vikings and Indianapolis Colts.

“Since the pandemic, so much has happened and I can’t wait to see you all and share this new album. The overall theme of ‘Dirty’ is about taking the high road when others have done you wrong, which so hard to do,” Moye states. “But forgiving others is not for them, it’s for you in order to thrive and grow. The songs on this album take you on a journey of emotions that one goes through before you hit the forgiveness stage.”

Malina will kickstart her “DIRTY” tour in Austria and Germany in April and will announce summer dates back in the U.S. soon. Moye’s last release “Bad As I Wanna Be” reached number one for two consecutive weeks on the Billboard Blues chart and her signature sound has garnered rave reviews from “Billboard Magazine.”

Rocking an upside-down Fender Stratocaster or touting a Gibson Flying V, acclaimed singer, songwriter, and lefty guitarist, Malina Moye has carved out her own lane among the new breed of Rock artists with a unique blend of Pop-Rock, Funk, and Blues. From honoring the late Queen of England, to playing on Experience Hendrix Tours alongside Buddy Guy, Kenny Wayne Shepherd and Eric Gales, to honoring music pioneer Chuck Berry at his Rock n Roll Hall of Fame tribute concert, Moye has been considered a premiere guitarist by Guitar World Magazine, naming her one of “the top 10 female guitarist to know.”

Malina also teamed up with actress/recording artist Bella Thorne on the single and music video “Phantom,” which garnered over one million streams in 24 hours and three million views on YouTube in less than two days. American Songwriter Magazine calls Moye “a beacon” and “a treasure of an artist.” For more information, visit MalinaMoye.com. 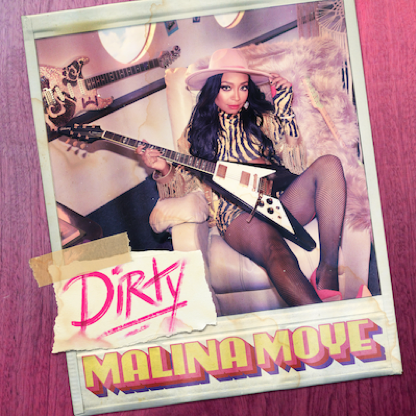 “Say My Name” is out everywhere at https://linktr.ee/malinamoye