Nashville-based singer/songwriter Emily Hackett is celebrating the holidays with her cover of John Lennon’s “Happy Xmas (War Is Over).” “Recording this song has always been on my bucket list,” Emily explains. “The timing seemed so appropriate with everything going on in the world.“

The lyric video, created by Emily herself using clips of her own home movies around the holidays. The artwork, designed by Bo Rinehart of Needtobreathe, was inspired by Lennon’s trademark doodles. “I thought nodding to that would be the best way to represent him and keep the focus on the message of the song,” Emily shared with Taste of Country. 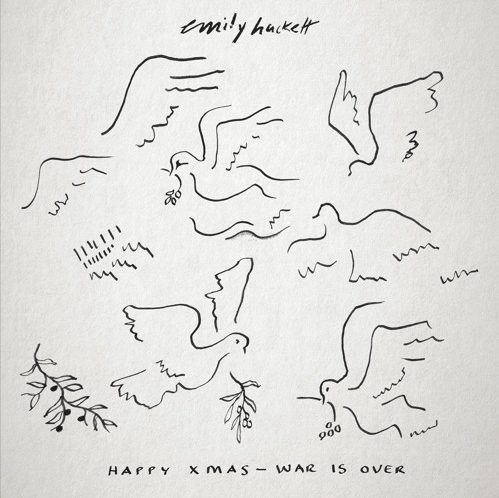 Inducted into CMT’s
Next Women of Country Class of 2019

Emily recently released her debut EP, By The Sun, on September 21st. “[By The Sun] are the songs that take full and honest ownership of who I am and how you’d meet me on the street,” said Emily in a recent interview with Ladygunn Magazine. “They all encourage authenticity and staying true to yourself and what made you, including the times you have to laugh at yourself a bit.“

“Her EP, By The Sun, is a smart meeting-point between early-Aughts pop, country’s current genre playfulness and the one-name women of the Nineties (Faith, Trisha, Shania), with plenty of room for both tender and tongue-in-cheek confessionals.” – Marissa R. Moss, Rolling Stone

Listen to By The Sun in its entirety HERE.

Emily Hackett speaks the truth. The singer/songwriter raised in Atlanta, GA pulls these emotions into her music, stirring in an authentic blend of self-deprecation that is both unique and refreshing. What poises her against the rest of the soul of fiery artist ready to light up the stage, all the while still as honest as her southern roots.

The result of Emily’s insatiable passion is undeniable. In 2013, Emily released an acoustic cover with Megan Davies of Lorde’s hit “Royals.” The response has brought in over half-a-million views on  Youtube, was featured on Buzzfeed, won “Best Coffeehouse Cover of 2013” on Sirius XM and reached the final round of “Best Royals Covers” on Ryan Seacrest. In 2014 Emily won the national Belk’s Modern Southern Music Showcase where she played tour dates with artists like Lady Antebellum, Jason Aldean, Luke Bryan and Rascal Flatts. In the same line, her duet with Parachute frontman Will Anderson, “Take My Hand (The Wedding Song)” reached over 50k streams on Soundcloud in less than two months and peaked at the No. 4 spot on the iTunes Singer/Songwriter chart. The music video for the single currently sits at almost 24 million views. Emily’s 2017 single “Nostalgia” earned her a spot on CMT’s Artist Discovery Program, and she’s currently one of The Boot’s Artists to Watch in 2018.

There’s a compatibility between the novelty and depth found in Emily’s artistry. Her music has the power to transform listeners in a direction where many songwriters fear to tread. With her organic honesty and raw-honey vocals, it’s no wonder that the possibilities continue to unfurl for Emily Hackett.

For more information about Emily: