October 23rd, 2020 –  New York, NY, Brighton, UK:  Juanita Stein releases her third solo album, Snapshot today via Handwritten Records. About Snapshot (Produced by Ben Hillier): “It feels fundamental to understanding the devastation and eerie silence thrust upon us after his sudden death,” begins the Brighton-based, Australian songwriter Juanita Stein, discussing the moment of great sadness that inspired her new record. “It was a daunting task to sum up the life of one man such as my father. He was endlessly inspiring, charming, deeply talented and passionately spiritual. He admirably, and at times frustratingly, carried the torch for his own musical career until the very end.”

Unlike her first two solo albums, ‘America’ (2017) and ‘Until The Lights Fade’ (2018), which were made in just a few weeks in the United States, ‘Snapshot‘ was recorded over the course of eight months at Agricultural Audio, not far from Juanita’s home. She talks about the process: “This allowed me the time and distance I so craved. Ben was deeply concerned with allowing the songs to breathe and to take the right shape. We laid down all the defining guitar parts and vocals which were then beds for the band to come in and lay their parts on.”

As the record began to take shape, Juanita “called on my brother, Joel Stein, (guitarist in Howling Bells) to play lead guitar, I knew only he could harness the exact frenzied energy needed for the songs. Both he and I were going through something pretty momentous and I wanted to shift that energy into the music. Evan Jenkins on drums alternated between freeform and thunderous on some tracks, light and barely-there on others. Jimi Wheelwright on bass held it all together beautifully.”

The result is a record that feels crafted from a life lived as much as it was clearly excavated from loss. It’s a record that strives to capture more than a passing moment and succeeds in laying its hands on something bigger than most of us will ever fully understand.

She has also confirmed a special, full band, live show from Brighton’s Electric that will stream on demand for 24 hours starting on Sunday, November 1st. Tickets for the show, available globally, are £8 (approximately $10.30 USD), with £1 from every ticket sold going to the #WeMakeEvents campaign in support of the live music industry. they are available now at http://link.dice.fm/Juanita-stein. 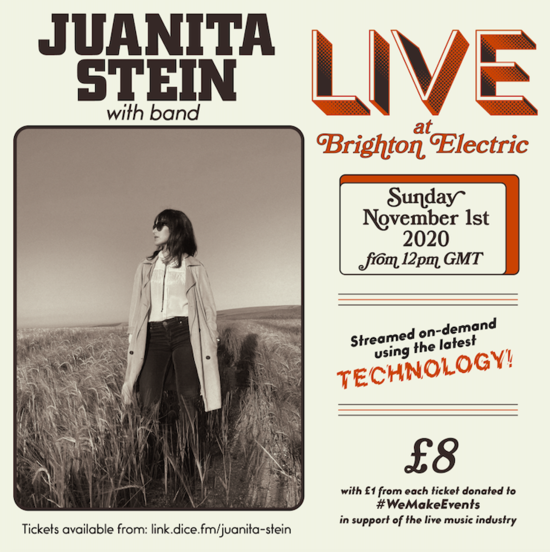