Hailey Knox has taken her “preternaturally soulful voice” (Billboard), “precocious…rhythmic earworm” (PopMatters) songwriting, and girl-next-door charm from her upstate New York bedroom performances on YouNow to intimate venues in NYC to major touring spots across the country supporting the likes of Charlie Puth and AJR, all while still a teenager.

And the lyrics to her new song “Runaway” (out today) fully demonstrate a young artist learning to acclimate herself to the demands of life on the road — enjoying the excitement while missing home and vice versa, riffing “wherever I am, I’m missing where I ain’t”.

Hailey’s upcoming mixtape, titled the ‘Hardwired Mixtape’, will be out November 16th, and also features her songs “Don’t Got One”, a reflection on isolation that Paper said marks Hailey as a “certified social media crossover”, as well “Bitch, Bitch, Bitch”, a brassy provocative rally against chronic negativity where her “sonic creativity truly shines” (Earmilk). The mixtape is a career-turning move for Hailey, showcasing a noticeable growth from the youthful (albeit incredibly well-composed) content of her 2016 debut EP ‘A Little Awkward’ into an indie songstress who at just twenty has put in years of musical experimentation to perfect her undeniably clever writing, her intricate loop pedal live performances, and her humbly fearless delivery. 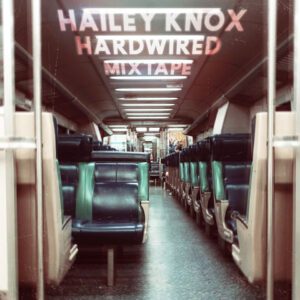