Acclaimed roots-rock duo Larkin Poe has partnered with innovative hybrid orchestra Nu Deco Ensemble for Paint the Roses: Live in Concert — a new album out tomorrow that reinterprets Larkin Poe’s music, including their 2020 release Self Made Man and more, through an orchestral lens. Fans can watch the full performance via Facebook here on September 17@ 12pm ET.
American Songwriter premiered the touching fan favorite “Mad As A Hatter” today. Following “Every Bird That Flies” and their version of Bessie Jones’ stomp and clap “Sometimes,” Larkin Poe’s Rebecca Lovell explains: “I wrote ‘Mad As A Hatter’ in memory of our late grandfather. He battled with mental illness in his lifetime and spent the majority of his years undiagnosed. The song has become a touchstone in the Larkin Poe community and sparked countless conversations around the world between people who find resonance in the lyrics. At long last, the stars have aligned through our collaboration with Nu Deco Ensemble, and we are so excited to finally be able to share a deeply meaningful performance of one of our nearest and dearest songs.”
“‘Mad as a Hatter’ is my personal favorite song from our collaboration with Larkin Poe, as well as to have arranged, so it is no surprise to me that it remains one of their most requested works,” Nu Deco Ensemble’s Sam Hyken said. “The combination of the twists and turns of the song’s musical journey combined with the powerful subject matter allows for the orchestra to truly shine and heighten the emotion. We are honored to play a part in helping this special song be released to the public for the very first time.”
“For me, this collaboration and connection we have with Larkin Poe is epitomized by this powerful track,” Nu Deco Ensemble’s Jacomo Bairos said. “We’re humbled and grateful to share with people around the world who may be going through their own personal journey with mental health issues.”
Paint the Roses documents a collaborative, streamed concert by the two artistic groups in December, 2020 at Miami’s North Beach Bandshell. The performance was part of Nu Deco’s 2020-21 virtual and socially-distanced concert season, which featured the ensemble’s genre-bending orchestral music and its powerful first collaboration with Larkin Poe. 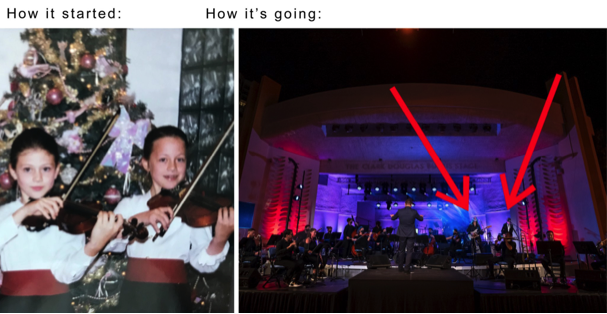 Larkin Poe — a Nashville-based sister-duo comprising multi-instrumentalists Rebecca and Megan Lovell — had recorded their fifth album Self Made Man (which topped the Billboard Blues Album chart and UK’s Independent and Americana Albums charts) in the summer of 2020 but could not take the music on the road due to COVID-19 restrictions. Nu Deco Ensemble’s collaborative concert provided the duo their first chance to play the new record’s songs for a live audience. The tracks on Self Made Man (and now on Paint the Roses) draw on wide influences but are rooted in the creative heritage of Larkin Poe’s beloved American South and Southern Gothic themes.
“During the challenging times of this past year, music served the critical purpose of connection to one another,” Nu Deco Ensemble Co-Founders and Artistic Directors Jacomo Bairos and Sam Hyken explain. “Among those valuable connections was our first collaboration with the amazing duo Larkin Poe and the live album that resulted from it.”
Larkin Poe added, “Before we could even speak in full sentences, our introduction to the language of music began with classical violin and piano lessons; ever since then, music has been the bedrock upon which we’ve built our lives. Over the years we have drawn inspiration from a wide range of genres, but it has always been a dream of ours to find a way to honor our classical upbringing. ‘Paint The Roses’ was born out of a fortuitous, one-night collaboration with Nu Deco Ensemble. In hearing our Roots Rock n Roll repertoire reinterpreted through an orchestral lens, it felt like a creative circle was being completed; we wanted to share the performance on a grander scale and, thus, our first-ever live album came into being. We are deeply indebted to Sam Hyken for writing such incredible orchestra arrangements and also to Jacomo Bairos for conducting such a magical evening of music.”