Identical twin sisters Alanna and Brianne Finn-Morris–making music together as Fionn since they started busking together as pre-teens—release their self-titled debut on 604 Records today. The “captivating” (Parade) twelve-song collection, each sister writing her own six songs, showcases a maturity and penchant for mysticism far beyond their years.

Drawing from influences as far-reaching as Celtic folk, the angst of Alanis Morissette, and the sonic atmosphere of Joni Mitchell, the album demonstrates exceptional emotional depth and range while exploring such themes as the mental degradation that comes with passing time (“Castles”), biting critiques of the unrealistic expectations society places on women (“Magazine Face”), and toxic masculinity (“The Horns Are Fake”). Breathing life into tried and true themes with their refreshingly modern perspective, the two reflect a mirror back on society with an ethereal, lush sound unlike anything else in folk pop.

The sisters recently made their NYC and LA live debuts at the Annie O Series at the Standard East Village Hotel and at The Bardot in a School Night series performance. ‘Fionn,’ a culmination and taste of what’s to come from the young folk pop visionaries, is set for a CBC First Play Live and has already garnered support from Billboard, Parade, Ladygunn, PopMatters, Northern Transmissions, and many more. 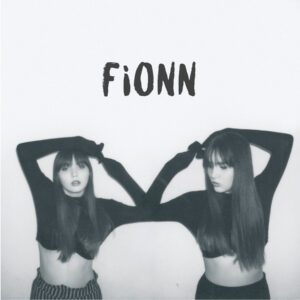 Fionn’s Alanna and Brianne Finn-Morris might be young, but don’t let that fool you. The 19-year-old twins from White Rock, British Columbia, have been singing together for most of their lives, forging folk-pop sound centred around the sort of telepathically tight vocal harmonies that only siblings could deliver. Lyrics that deliver both sharp social commentary and poignantly personal reflections are backed by arrangements that range from lushly orchestrated balladry to roots-rock. At the heart of it all, the intertwined voices of Alanna and Brianne sparkle, singing songs that suggest an old, wise soul dwells behind Fionn’s fresh faces.

“…their achingly honest lyrics and well-balanced harmonies are undeniably seasoned, a product of singing together most of their lives.” —Billboard

“With a bent for modern feminist subject matter and a decidedly strong point of view, these brilliant musicians have somehow honed in on a delightful, polished and unpredictable sound. The result is captivating.” — Parade

“Their sound is timeless: transcendent harmonies, soul-stirring melodies, and haunting lyrics take the listener out of the current moment and into another realm.” — Ladygunn