Deau Eyes, aka Richmond, VA-based artist Ali Thibodeau, recently signed with Egghunt Records for her forthcoming debut LP, Let It Leave. Due out May 8, the 9-song set was co-produced with longtime friends Jacob Blizard and Collin Pastore, whose creative efforts show up on Illuminati Hotties’ Kiss Yr Frenemies and Lucy Dacus’ No Burden and Historian. Deau Eyes announced the album earlier this year with a video for the album’s lead single, “Some Do,” and Stereogum noted, “Thibodeau is also good friends with Dacus, and her own music makes it clear why they might get along. It’s confessional and open-hearted, layered and sly.”

Today, Deau Eyes is sharing a second single from Let It Leave, “Parallel Time,” the only stripped-down song of the set. Written about being in love with someone in a different time zone, the painstaking ballad was recorded in Thibodeau’s bedroom in one take with Hayden Arp playing guitar. Of the track, she offers, “It’s about love won and lost in a faraway place and bottling up that heightened feeling of togetherness in all the jet lag and ecstasy — building trust rapidly and savoring every moment for when that unique experience is out of your reach.”

To accompany the single, Thibodeau took time during self-isolation to make a music video using old footage found on her iPhone. She explains, “I wrote this song about having ended an incredibly surreal chapter of my life and recounting the beauty within arrivals and departures. Revisiting old iPhone footage of my travels and adventures in love has been oddly comforting in these times where they were once too painful. To see the vision of this song fully fleshed out is a little reminder that the movie in my mind is a tool for catharsis and though things seem bleak, there is more adventure and chapters of pure elation to come.”

Most of the footage is from Thibodeau’s time spent traveling and living out of a van while busking on the street and playing open mic nights around Europe and the US. She took her earnings and recorded some demos in an Airbnb cottage in Ireland with her partner at the time. After they split, she devoted her whole self to songwriting, scrapped half the folk songs she had previously hashed out, and wrote a rock album to get herself through the breakup. 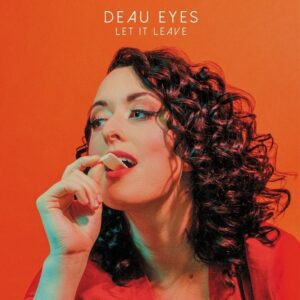 Due in part to urging from friend Lucy Dacus, Thibodeau moved back to Richmond and began working towards releasing her first full-length. She recorded Let It Leave in January of 2018 at Trace Horse Studios in Nashville, TN and has since been DIY touring the U.S. with and without her band. Like Let It Leave, her live shows are sometimes loud and punky and sometimes subdued and sweet, varying from song to song. As a spectator, you understand the emotion of the music as much from her captivating stage presence as you do through her skillfully crafted song lyrics. She is disarmingly earnest and fans will have a chance to witness this despite the country’s current state of self-isolation and quarantine: Thibodeau is set to perform the entirety of Let It Leave acoustically via an Instagram live stream this Thursday, April 16, at 7:00 PM EDT.

Let It Leave is due out on May 8, 2020 via Egghunt Records and can be pre-ordered now HERE.