Cry Pretty’s debut week also marks the most first-week streams by any female in Country music. This is Underwood’s seventh consecutive album to debut at No. 1 on the Top Country Albums chart, representing all of her first seven albums including her Greatest Hits: Decade #1.

Check out the Billboard article here.

NPR declares that Cry Pretty “pushes her creative boundaries and leans into modern R&B while retaining the Oklahoma singer-songwriter’s country roots” and “Underwood’s voice owns pretty much anything it touches.” 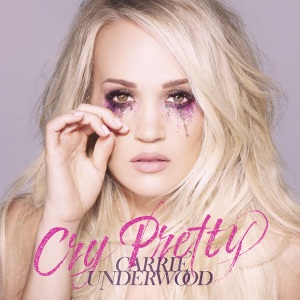 Entertainment Weekly has called the album “Her most emotionally accessible work to date.”

Underwood was recently featured in a profile on CBS Sunday Morning, as well as performances on The Tonight Show Starring Jimmy Fallon and The Ellen Show. She received her star on the Hollywood Walk of Fame on Sept. 20 and performed at the iHeart Radio Music Festival in Las Vegas. Nominated as Favorite Female Artist – Country, Underwood will perform at the 2018 American Music Awards on Oct. 9 following her promotional tour in Australia, which will include an appearance at the iconic Deni Ute Muster festival. Fans will get the chance to watch multiple performances from Carrie that night as she is also set to appear on Jimmy Kimmel Live! at 11:35 pm ET / 10:35 CT on ABC immediately following the 2018 American Music Awards live broadcast.

Cry Pretty is Underwood’s first release on Capitol Records Nashville and her first-time co-producing alongside David Garcia.  She co-wrote nine of the songs on the album including her current single, “Love Wins,” with David Garcia and Brett James.  She recently released the official music video for “Love Wins,” which was directed by Shane Drake. View HERE.

Underwood returns this fall for her sixth season as the voice of primetime television’s #1 program, Sunday Night Football. This November, she and Brad Paisley will co-host the CMA Awards for the 11th consecutive year.

In spring 2019, Underwood will launch a new arena tour, The Cry Pretty Tour 360. Sponsored by CALIA, the new tour will kick off on May 1 in Greensboro, NC, and will play 55 arenas across the U.S. and Canada and be promoted by AEG Presents.  She will be joined on tour by special guests Maddie & Tae and Runaway June.