November 24, 2020- Brandy Clark is nominated in two categories at the 63rd GRAMMY Awards: Best Country Album (Your Life is a Record) and Best Country Solo Performance (“Who You Thought I Was”).

The nominations culminate a breakthrough year for Clark following the release of her critically acclaimed new album, Your Life is a Record- out now on Warner Records (stream/purchase here). Produced by Jay Joyce, the album consists of eleven new tracks including the single, “Who You Thought I Was,” which she recently performed on “The Kelly Clarkson Show.” Watch/share HERE.

Most recently, this fall, Clark released two new collaborations with Brandi Carlile- “Like Mine” and “Same Devil.” Both produced by Carlile, the songs were recorded while working from the artists? respective quarantines and were released to critical acclaim. Of ‘Same Devil” Entertainment Weekly declares, “his haunting, acoustic ballad that conjures both dark alleys and spectral hollers as it addresses the sins and salvations that unite us, more than honors the promise of the great Brandi/y summit of 2020,” while Variety praises, “a harmonic convergence of names and voices that features the billing we might have thought possible only in fiction.”

Additionally, Clark wrote “A Beautiful Noise”- a new duet performed by Alicia Keys and Carlile- along with an all-female team of musicians including Keys, Carlile, Ruby Amanfu, Hillary Lindsey, Lori McKenna, Linda Perry and Hailey Whitters, while her new song, “Only Time of Year,” is featured on the soundtrack of Hulu’s new Christmas movie, “Happiest Season.”

Recent critical acclaim for Your Life is a Record.. 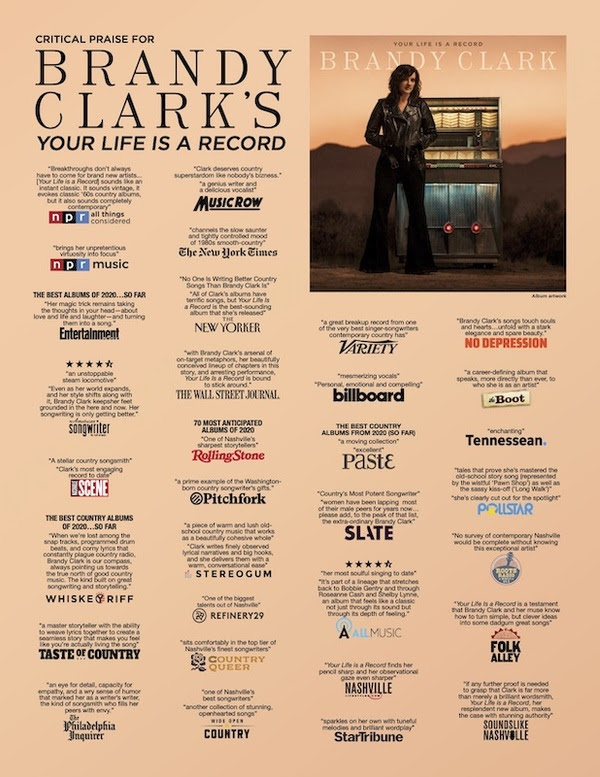 Created after the dissolution of a long-term relatio”ship, the album features Clark’s most personal songwriting to date and was recorded largely as an intimate acoustic four-piece-featuring Clark, Joyce, Giles Reaves and Jedd Hughes-with subsequent Memphis strings and horns layered in with arrangements by Lester Snell.

In celebration of the release, Clark will embark on her extensive “Who You Thought I Was Tour” next year including stops at Nashville’s 3rd & Lindsley, Atlanta’ Smith’s Olde Bar, New York’s Bowery Ballroom, Boston’s Brighton Music Hall, Philadelphia’s Boot & Saddle, Denver’s Globe Hall, Seattle?’ Neumos, Los Angeles’Lodge Room and Austin’s The Parish among many others. See below for complete itinerary. Tickets for the tour can be purchased at www.brandyclarkmusic.com/tour.

An eight-time GRAMMY nominee and CMA Awards ?Song of the Year” recipient, Clark is one of her generation’s most respected and celebrated songwriters and musicians. Her songs include Kacey Musgraves’ “Follow Your Arrow,” Miranda Lambert’s “Mam”s Broken Heart,” The Band Perry’s “Better Dig Two” and Hailey Whitter’s “Ten Year Town,” which was just named #2 on Rolling Stone’s “25 Best Country and Americana Songs of 2019” round up. Her two solo albums-2013’s 12 Stories and 2016’s Big Day in a Small Town-each garnered immense critical acclaim landing on “Best of the Year” lists at New York Magazine, Billboard, NPR Music Entertainment Weekly, Rolling Stone, Stereogum, etc. NPR Music’s Ann Powers calls her, “a storyteller of the highest caliber,” while Rolling Stone’s Will Hermes declares, “a country visionary” the consolation of a beautiful voice delivering a well-built song, cold truth rising from it like fog off dry ice.”

5. Who You Thought I Was

9. Who Broke Whose Heart