Home News Music News AWESOMENESS FILMS AND CAPITOL RECORDS PRESENT: “TO ALL THE MUSIC,” A VIRTUAL...

LOS ANGELES—July 13, 2020—Awesomeness Films, a subsidiary of ViacomCBS, and Capitol Records today announced To All The Music, a virtual concert event celebrating the vinyl release of the To All The Boys: P.S. I Still Love You original soundtrack, premiering on Saturday, July 18, at 5 p.m. PT on AwesomenessTV’s YouTube channel.

Hosted by Lana Condor, who stars as Lara Jean Covey in the Netflix film, To All The Music will bring the movie’s cast and musical artists together to perform hit songs from the soundtrack and give fans an inside scoop behind the music and movie, spilling secrets and surprises along the way. The special will also feature original ‘love letters’ to give fans exclusive insights about the songs created for the film.

In addition, Awesomeness is partnering with Save The Music Foundation to help raise money toward restoring public school music programs across the country. Throughout the special, viewers will learn about Save The Music’s mission and be invited to donate through the YouTube stream if they wish. Awesomeness is also making a $55,000 donation to fund a J Dilla Music Technology Grant at a high school in the U.S.

Said Condor, “Playing Lara Jean has brought so much joy to my life and a huge part of what makes our To All The Boys universe so special is the music. I’m so excited to bring together the cast, musical artists and our amazing fans to celebrate the songs behind To All The Boys: P.S. I Still Love You and share some fun surprises too, all for a great cause!” 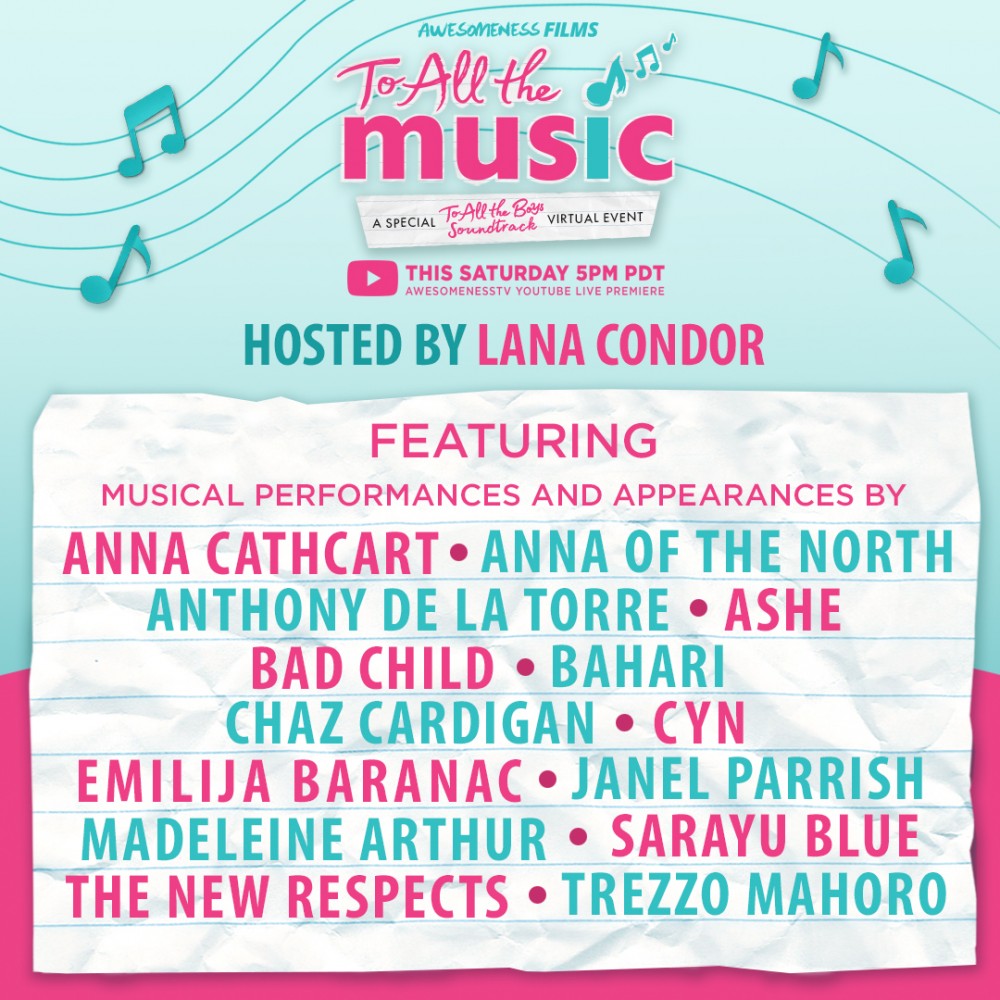 Remote performances will include:

Lana Condor and Anthony De La Torre – cover, “I Like Me Better” by Lauv
Janel Parrish – cover, “About Love” by Marina
Chaz Cardigan – “As I’ll Ever Be”
Cyn – “I Can’t Believe”
The New Respects – “You Should Be Dancing”
Ashe – “Moral of the Story”
Bad Child – “Candy”
Anna of the North – “Lovers”
Bahari – “Crashing”

The To All The Boys: P.S. I Still Love You original soundtrack vinyl drops on July 17 HERE. Music supervision by Laura Webb and Lindsay Wolfington.

To All The Music is produced by Awesomeness and Skipper Creative. The special is part of Awesomeness’s Summer of Awesomeness multi-platform initiative, which provides Gen Z entertainment and engagement all summer long from the safety of home. Recently-announced shows include What It’s Like, a monthly Gen Z discussion series, IGTV series Spark The Convo, which addresses timely topics like allyship, implicit bias and coming out; and new episodes of ATV Daily Report, which covers the pop culture space through a Gen Z lens. More new shows to be announced in the coming weeks.