New generation alt-rock recording artist Kate Angel returns with another self-written and produced rock banger called “16 Drops Of Tea” in an exclusive premiere by Guitar Girl Magazine, plus an interview with the up-and-coming 17-year old rock songstress out of Austin, Texas. Her sophomore release as a solo artist, the new song will be available Thursday, September 2 across all major digital music platforms, or linktr.ee/KateAngel. 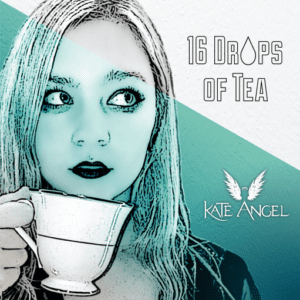 “When words fail, music speaks,” Kate commented. “Sometimes I will get criticized or bullied about my social anxiety, so I resort to drinking tea because I love it so much, and it calms me down. It’s my comfort treat.”

The new tune is a fast-paced, modern rock composition which opens with a velocious guitar riff, followed by bone-rattling percussion, and then rapid delivery of Kate’s soaring vocals. Revealing the poetic thoughts that race through her head, Kate spins her internal voices into clever lyrics about coping with teenage anxiety.

The ambitious Austin native is also working on finishing the song’s new video too, which she’ll premiere in the coming weeks via her YouTube channel.

“I decided to put an end to the criticism, and stick up for myself and others who struggle with anxiety,” she continued. “16 Drops of Tea is my sarcastic way of telling myself I don’t know what is going to happen next, or what the bullies are going to do the next time they see me.”

Alt-rock singer-songwriter and music producer Kate Angel is quickly becoming a major driving force behind the new generation of rock blossoming out of the live music capital of the world; Austin, Texas. The talented young multi-instrumentalist wrote her first song at age 10, and has since released several single projects which embodies both the soul of rock ‘n’ roll, and a modern 21st-century

alt-rock influence too. Her 2020 EP Wrong Era has landed her on Austin’s CW-TV show 512 Studios LIVE on more than one occasion, plus more than 60 live performances at ACL 3Ten, Unofficial SXSW, Houston Rodeo, Round Rock Chalk Walk, and the Georgetown Red Poppy Festival. She is set to release new music in 2021, which is being recorded at Austin’s Orb Recording Studios. Kate’s debut song “H20” released in April, quickly racked up more than 65K views on YouTube and established her as a new breed of alternative rock n’ roll being produced from the LIVE music capital of the world.