Arielle has released a new studio album titled Suspension / Dimension. Fueled by a strong, supportive fan base, she continues to create and travel the globe on her journey of self-discovery. Upcoming appearances are planned in multiple cities in California and Texas, alongside Nashville, Atlanta, Charlotte, and at Sunfest in West Palm Beach, FL where she’ll share the stage with Keith Urban and Larkin Poe on May 5. A detailed itinerary follows below. Her current release Suspension / Dimension continues to explore the roller-coaster story of life. She reveals, “I would say that a lot of this album centers on accepting the wanderlust part of me. The free spirit that must go and chase, and in some ways live in the beautiful memories that have come before, whilst I create the new ones. They keep me going when things are hard. But the very essence lies in the uncomfortability of being in two places at once. Who I WAS and who I was becoming…not really committed or understanding of either, and the regret/remorse/ confusion and excitement that comes with that. It is also interlaced with love, musings, and epiphanies; the past and future. The duality meets in the middle somewhere.” The context of Arielle singing, “When I thought that nearly nothing could take me down; Solid ground turned to clouds; Now I’m falling, crazy chaos waiting; for someone to change me; learning impatiently,” reflects this internal chaos and dissatisfaction within life. She shares, “To me, this is the representation that the confusion I feel, dissatisfaction within my life, as well as the challenge of being in the moment is in my control, wishing someone else could fix it. But being hit with the harsh realization that it won’t come. I’m in control of my destiny.” 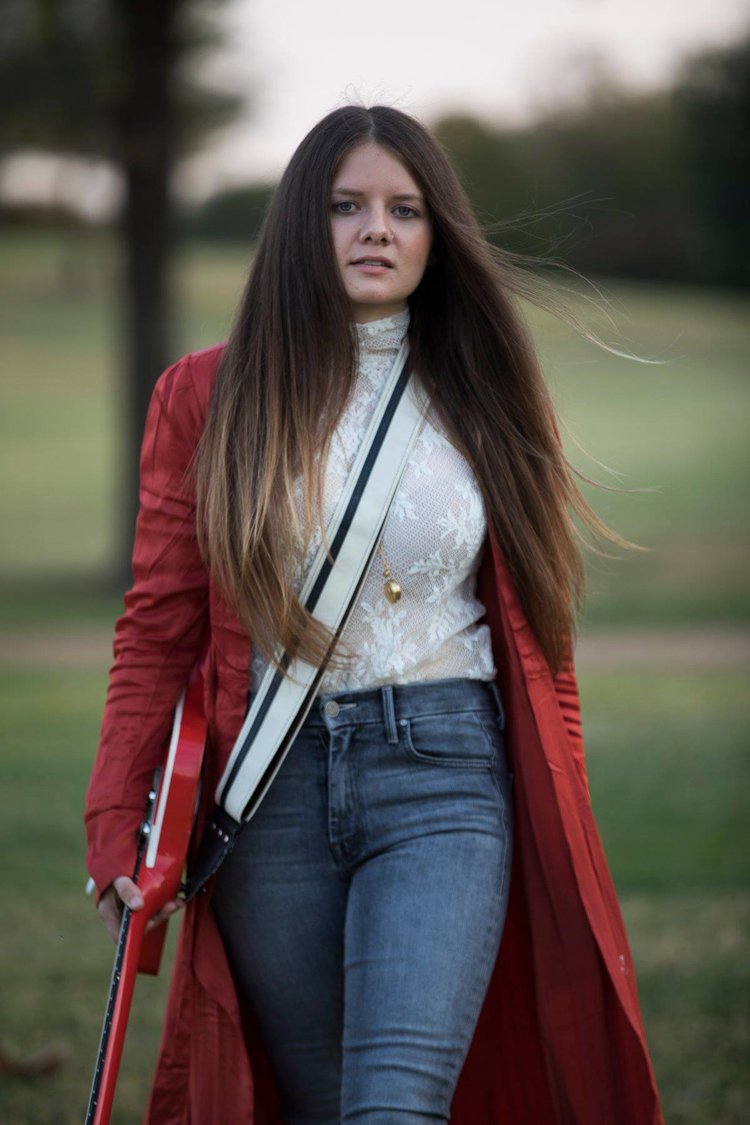 A singer, a songwriter, a musician, an activist, Arielle is a believer, a seer, an engineer, an innovator. She’s a natural born talent with proficiency for mind-bending musicianship, on par with the world’s finest. Whether it’s a sustained single note or an extended instrumental passage, whether it’s drenched in blues, ascending the mountaintops of rock or exploring the great wide open, her music makes you feel something. With soul-baring lyrics and melodies that burrow in your brain, she effortlessly emotes refrains with a four-octave range. It resonates, it reverberates, it nourishes the great escape.  As she shares, “I’ve got a hippie heartbeat, with an edgy rocker spirit. Some say I’m a bit of a throw-back since I’m pretty sure in some other lifetime I was raised in the ’60s and ’70s, soaking up the tie-dye love.  It reminds me of good ol’ days, where folks like Joni Mitchell, James Taylor, Queen, Jimi Hendrix, The Who, and MANY more of those greats reigned supreme. Ah Well! Missed that boat. I’m trying to keep the honest essence of that unique era going in my own way.” 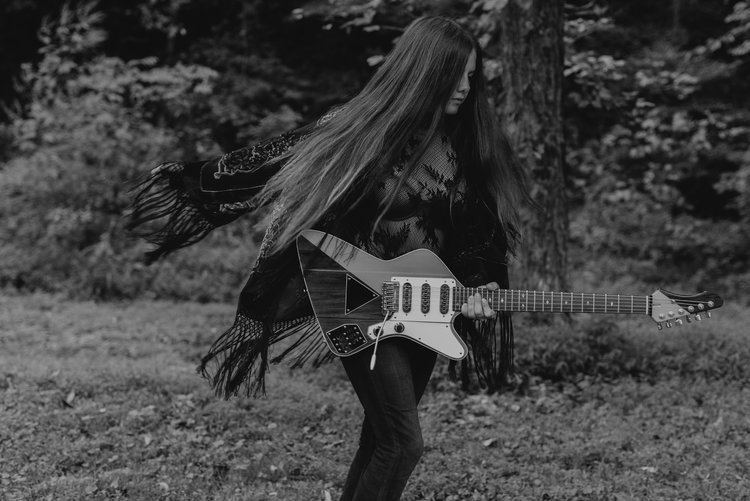 Born in New Jersey, and raised in California and Hawaii, Arielle’s musical journey began at the age of 5 when she joined the Peninsula Girls Chorus of California. It was a magical moment only equaled when she got her first guitar at the age of ten. It was as if she had found her soul mate. She found herself at ease with the way music could speak. A child prodigy, though she didn’t relate to its perceived vanity, only to its life-affirming musicality. She attained a degree from Musician’s Institute in L.A. and continued her education at London’s Institute of Contemporary Music Performance.

Discovered in 2010 by guitarist Nuno Bettencourt, known for his work with Extreme and Rihanna, she signed with an indie record label. In the years that followed, she made a name for herself touring throughout North America and the UK, opening and playing with Heart, Joan Jett, Graham Nash, Country Joe McDonald, Joe Bonamassa, Guns N’ Roses, members of Deep Purple, Billy Ray Cyrus, Eric Johnson, Gregg Allman, and CeeLo Green, which included a main stage slot at Coachella. 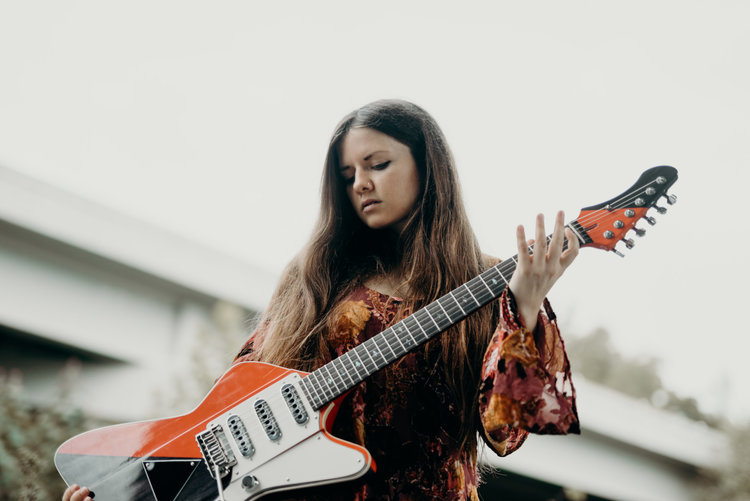 Good fortune ensued when Arielle was handpicked by guitarist Brian May for a key role in the London-based musical, “We Will Rock You,” a production based on the songs of his band Queen. It was an incredible opportunity that allowed her to explore new horizons. The notoriety and acclaim she received from her performances for one of West End’s most-beloved, and longest-running musicals, was a great accomplishment, and one that helped her grow, personally, and professionally, as more successes soon followed. From the cover of Guitar Player Magazine, to being recognized by country superstar Vince Gill as one of the ‘Top 5 Best New Guitarists,’ to being cast as a guitar player on the hit TV show Nashville, to ascending to No. 3 on the CMT Pure chart with the song “California,” it seemed like Arielle was living the dream but not everything was really what it seemed.

Arielle had spread her wings and soared with newfound freedom, but there continued to be a glass ceiling she kept bumping up against, being a woman in the music business. It first started when she was 16 when she took a job at a music store but wasn’t allowed to sell guitars as the girls were only allowed to “water the plants.” This continued when she became one of only two women in a class of 2,000 at Musician’s Institute. Before long, she had a teacher tell her that she “should just wear a skirt and push-up bra because that was the only way she would get attention.” 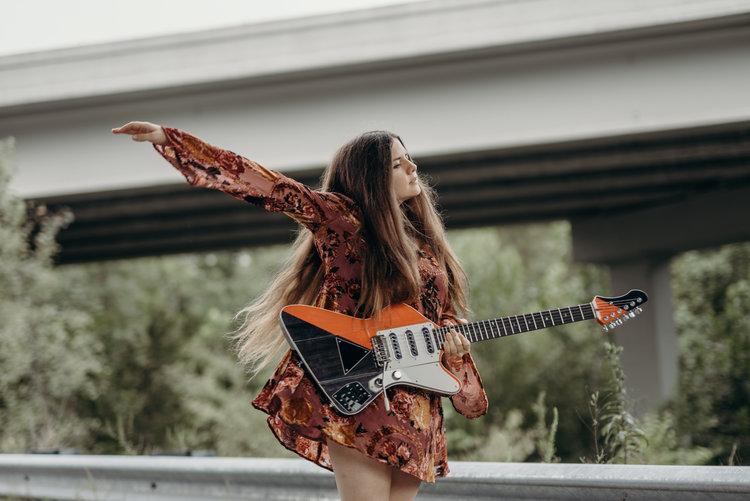 It was unbearable and untenable. She recalls the frustration and the despair, “I had a record deal and gave a lot of myself away – I looked like someone who wasn’t me. I used my body and my ‘attractiveness’ to get me where I wanted. I spent a LOT of time being broke, struggling, filing for bankruptcy, living in my car. I grappled with being overweight and then with anorexia. I always felt like I didn’t belong. I was never tall enough, and wasn’t sexy enough.” Enough was enough.

In 2015, she released her debut album, The Whale, followed by two EPs in 2017, Interim and My Gypsy Heart, who’s title track features Eric Johnson. The year 2018 bore more fruit with the release of an EP titled “Mind Lion,”, and a self-actualized representation of her manifestation. “Like a lion, a part of my mind was wild and ferocious, wielding quite a lot of power. I realized and determined that I wanted to use the energy for good to help me achieve what I want. It’s about finding peace and okay-ness in the moment, no matter what. It’s important to find happiness as a choice, not something that falls upon me.” The resulting work was a tremendous success, logging seven weeks on the Billboard ‘Independent Album’ chart while also garnering critical acclaim, eliciting comparisons to songbirds Karen Carpenter and Eva Cassidy while also bringing to mind Maggie Rogers and Margo Price. American Blues Scene noted “her stellar vocal range,” while Ink 19 championed her as “an up-and-coming songstress who possesses calm, cool confidence beyond her years and rivals any seasoned musician.”

Arielle is in a constant state of evolution as an artist. When asked about how her art has evolved from the debut towards this current album release, she offers, “The funny thing about all of my repertoire is that there is SO much more I never released. I think part of me creating albums was to constantly keep up with the ever-moving and shifting ideas in my head. Once the album was released, I had an entirely new set of ideas, feelings, mindsets, outlooks, and abilities I wanted to create and record. I think Suspension/Dimension has made who I am and where I came from clearer since there are more songs on the album, but I also feel in many respects, I have matured as a songwriter, singer, and guitarist. On some of the other albums, I was experimenting stylistically. I am always trying to figure out how far I can push the guitar until it is irrelevant. How far I can push the emotions before it becomes a vacuum. Where the balances lie in each song. Also, which songs go together. I think I am becoming better at that as well as searching for each individual orchestration of the instrument section, which has developed as I have.”

In addition to writing and playing music, one of her passions is guitars, themselves. Her pride and joy are “Two-Tone,” an extraordinary one-of-a-kind guitar she painstakingly designed, and hand-built, with her friend Patrick Yates. Named for its two-tone color and inclusion of two-tone knobs, it’s an homage to her favorite guitars. Borrowing the ebony fretboard of a Les Paul, the long-scale neck and reverse headstock of a BC Rich Warlock, Steinberger Tuners, the Pickups/Selectors/Switches from Brian May’s iconic Red Special, the Tremolo/Bridge System from a Fender Jagmaster, and a noise-canceling silencer from Ilitch Electronics, Two-Tone is bound together with recycled Korina wood often referred to as “super mahogany.” It’s a visionary work of art and one that’s the signature showpiece for “Arielle Guitars,” a custom line of guitars.

Taking control of her destiny was a transcendent moment in her personal and professional development and one that extends to her compassionate support for animals and environmental issues, in particular, marine life and the ocean. A few years ago, she joined her brothers and sisters in musical arms to protest dolphin slaughter at an event in Taiji, a small Japanese town on the Pacific Ocean. It was very rewarding and she will continue to use her platform to raise awareness, and give back.

It brings her back to the reason she’s determined, against all currents, to share her gifts with the world. The human story. Not the morning glory. Arielle offers, “The thing with me was never to be a rockstar or get a lot of recognition. I get inspired by helping other people. Being genuine, being open, and raw. The hardships and the insecurities are the reasons why I’m able to be vulnerable and real in music. I like for the representation of me to have imperfections in it. I don’t want to hide; I want it to make sense when people hear the music. If I went through it and it was that hard, it is meant for me to share it with others who have been through it. I love making connections and then watching it even go even further, to help others heal, to inspire.”

Gender, race, religion, and orientation shouldn’t be a part of the equation. “It can be about the MUSIC. It can be about heart. It can break the confines of what we believe is possible to help create a better tomorrow.” Her gypsy heart has a purpose, to help sow the seeds of a more fully realized humanity. It’s a stream, soon to be a sea.