Decatur, IL-based Americana singer-songwriter Ashley Riley is set to release her new album, Set You Free, on June 18, 2021. Her sound is laced with earthy grit, and at its core, Riley’s music is best described as sophisticated indie-Americana. There’s a dreamy quality to the songs, yet lyrically they capture the essence of the more honest moments of our days: those seemingly ordinary moments that suddenly take your breath away or make you weak in the knees, those moments that prove to us that oftentimes the most extraordinary moments are found in our everyday lives.

Honest and disarming, the 10-song collection finds Riley stronger and wiser than before, her down-to-the-bone vulnerability on display, tempered with an understanding and sincerity that only comes with time. The gritty, rootsy moments that garnered favorable comparisons to Patty Griffin and Stevie Nicks remain, backed by lush instrumentation that incorporates genres such as indie rock and pop into her folk niche. “This album really encompasses everything that I do, from the really slow ballads to full-on rock songs,” says Riley.

Riley has been slowly chipping away at Set You Free for the last two years, taking a slightly different approach. After the release of her last two full-band albums (Through the Thin [2016], Can’t Let You Go [2017]), Riley returned to the solo songwriting roots that fans saw on her first three albums (Last One Standing [2008], Most Likely To… [2010], All The Pretty Things [2014]). Riley says of the experience, “I went back into my own little shell of singer-songwriter-ness, and I started enjoying that space again.”

She reached out to James Treichler at Wave Upon Wave in Champaign, IL, and headed into the studio in early 2019. Riley worked with Treichler, who served as producer, dialing in the sound for the upcoming album. “It was an interesting process, really digging in and choosing the palette for each song,” she recalls. “It felt really good to be giving each song a bit more consideration and time. I didn’t realize how heavily I had relied on different players in my previous bands to help pull out the sound, and it was really fun to step into that role more fully myself. James has been incredible to work with, especially considering that because of the pandemic the process turned remote, with us sending tracks back and forth to complete the songs. This is the first time in my career that I’m working with a producer on my record, and I think it helped to serve the songs to their best potential.”

Riley has been a staple in the music scene of her hometown of Long Creek, IL, where she got her start hosting open mics in the Decatur area around 2008, helping to revitalize and nurture the underground singer-songwriter scene in town. New Noise Magazine called her “one of the best obscure female artists I’ve heard in, well, ever,” and In-Forty.com declared her a “female songstress everyone would be wise to spend time with.” Women of Substance Radio noted: “Ashley’s songs have an ethereal and delicate quality… Her reverence for Americana artists like Neil Young and Patty Griffin is unmistakable. She pens lyrics that are unsettling and sometimes even disturbing, as all good lyrics should be.” Illinois Entertainer trumpeted: “Make no mistake, Ashley Riley has an utterly gorgeous voice and a sound all her own.” Seven of the nine songs on All The Pretty Things were heard in rotation on Starbucks in-store airplay.

“The past year, as we all can attest, has been sad and strange and full of challenges,” says Riley. “We’ve all had to adjust and figure out how to keep moving forward, what can take a backseat, and what we can let go of altogether. Music and art, now more than before, offers us a way to connect and feel less alone as well as some hope and relief. It can serve as medicine for the soul.”

In light of the COVID-19 pandemic, live performances will be few and far between. Fans eager to see Riley live can catch her celebrating the release of the album with a Livestream on June 17th at 8 p.m. central on TheBoot.com‘s Facebook and Instagram pages. 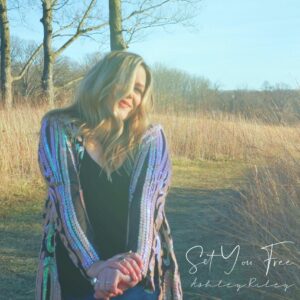