October 7, 2020—Academy Award-nominated and Grammy Award-winning singer/songwriter Aimee Mann will debut a 20th Anniversary Expanded Edition of her acclaimed album, Bachelor No. 2 or, the Last Remains of the Dodo, on November 27 as part of Black Friday Record Store Day. The colored vinyl reissue will be remastered and restored from the original session tapes and feature five additional tracks from Mann’s soundtrack for Paul Thomas Anderson’s 1999 film Magnolia, including the Academy Award- and Golden Globe-nominated “Save Me” and “Wise Up.” The record, which is limited to only 5,000 copies worldwide, will be available for purchase at participating Record Store Day retailers.

Mann self-released Bachelor No. 2 in 2000 and sold the first 25,000 copies directly from her website. After securing a distribution deal, she sold well over 275,000 units in the U.S. alone, leading the way for many self-releasing artists to come. Produced by Mann, Jon Brion (Fiona Apple, Rufus Wainwright) Mike Denneen (Guster, Letters to Cleo), Buddy Judge (Stevie Nicks, Liz Phair) and Brendan O’Brien (Bruce Springsteen, Pearl Jam), the album continues to receive critical praise even after two decades: Pitchfork proclaims “[Bachelor No. 2 is] a world-weary showcase of independent spirit and expertly tuned songwriting,” while calling the album “a contemporary classic.” Stereogum furthers, “Mann is widely revered as one of the finest songwriters.”

Of Bachelor No. 2 or, the Last Remains of the Dodo, Mann notes:

When I wrote this record, I was on a label. When I released it, I was not. There were some mergers of labels, and I think maybe this album got lost in the shuffle, but mostly they didn’t hear a single. They said I could go if I wanted to, so I did.

I called it Last Remains of the Dodo because I felt like singer-songwriters were a dying breed, and really, they still are. I don’t remember why Bachelor No. 2, but maybe because a lot of these songs are about relationships. Some of these relationships are with people and some are with record labels, and it’s not always easy to tell which is which. These things echo.

This album is better than I remember. I produced a lot of it myself because I knew what I wanted it to sound like and I thought I could do it. I wanted to spend time in the studio and experiment. I used a lot of drum loops and had a lot of great players, and apparently, I have a hi-hat credit somewhere in there. There are a couple of songs I would leave off if I released it today, but they are not the songs that I would have left off then.

After several albums with her band Til Tuesday, Mann began her solo career in 1993 with the album Whatever and made a name for herself through her independent success and the founding of her record label, SuperEgo Records. Her latest release, 2017’s Mental Illness, received widespread acclaim and won Best Folk Album at the 60th Annual Grammy Awards. The New York Times declared “Mental Illness wallows in its troubles, and it’s an exquisite wallow.” In addition to her solo albums, Mann has appeared on many film soundtracks.

In 2014, Mann joined up with Ted Leo for a more rock-oriented duo project, releasing a self-titled album under the name The Both. Other extracurricular activities ranged from playing herself on the hit TV series “Portlandia” to performing for President Obama and the First Lady at the White House to starting a Podcast with Leo called, “The Art of Process.” Named one of the HuffPost’s “13 Funny Musicians You Should Be Following On Twitter,” Mann has gained a diehard social media following for her quick wit and stinging observation. 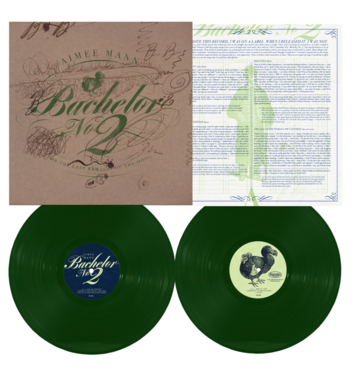 BACHELOR NO. 2 OR, THE LAST REMAINS OF THE DODO
(20TH ANNIVERSARY EDITION) TRACKLIST