Dallas, TX-based indie-folk singer-songwriter Vanessa Peters is set to release her new album, Foxhole Prayers, on October 5, 2018, via Idol Records. In Foxhole Prayers, Peters’s already-considerable songwriting prowess has risen to its fullest stature, presented as a concise, gut-punching collection of songs composed of piercing observations of both the outside and inside worlds.

“I’m a literature geek at heart and for years I’ve wanted to do an album somehow influenced by The Great Gatsby, but the idea seemed much too nerdy and abstract,” explained Peters. “But after I re-read it last year, it dawned on me that we were literally reliving the Gatsby years. Suddenly I could see all the corrupt and self-indulgent characters from the book all around me, with Trump as some kind of PT Barnum-meets-Warren G. Harding character. I was on tour in Europe at the time and had some time off between shows, so I holed up in a tiny apartment in Utrecht for four days and began writing the songs that would become the basis for the new album.”

Peters shines a bright light on the modern world, illuminating the perilous rise of populist politics, the seemingly incessant swirl of violence around us, the struggle to remain positive in dark times, and the need to stand strong against hate and desperation. The album is dark at times, but Peters reminds us on upbeat songs like “Lucky” and album opener “Get Started” that we forge our own luck from sheer determination and in finding gratitude even in the face of hardship. Never before have we heard Peters speak out as forcefully as she does in “Carnival Barker,” one of the album’s most pointed tracks which takes direct aim at not just populist politics but also the frightening way that history repeats itself. And it is impossible to remain dry-eyed throughout the starkly-honest “Fight,” in which Peters movingly bares her deepest fears as a songwriter.

In Foxhole Prayers, Peters demonstrates that she has not only reached an entirely new level of lyricism, but has vaulted into a new echelon of musicality. The album reflects a pleasingly diverse yet cohesive collection of styles, effortlessly weaving modern electronica elements and drum machines into more familiar acoustic and rock arrangements. The result is a splendid musical tapestry that unfolds from the first insistent notes of “Get Started” and keeps the listener sonically mesmerized throughout. For the record, Peters turned to producer Rip Rowan (Old 97’s, Rhett Miller), producer John Dufilho (Deathray Davies, Apples in Stereo), and what has now become her established stable of all-star musicians, including longtime sideman and Grammy-winner Joe Reyes (Buttercup) and Dallas guitar hero Chris Holt (Don Henley) on electric guitar. Dufilho and bassist Andy Lester form the rhythm section for most of the album, while Peters’s European bandmates (Federico Ciancabilla, Andrea Colicchia) also make an appearance on a couple of tracks.

On the deeply personal “Fight,” the track opens simply and builds to an emotional climax on a swell of interlocking guitar melodies evocative of Bends-era Radiohead. “Before it Falls Apart” is an instantly striking, minimalist arrangement of drum machines, acoustic and electric guitars, and a rich vocoder that suggests a more analog version of Imogen Heap. On “This Riddle,” producer Rowan gives the track a decidedly Neil Finn treatment, with intersecting live and looped drums and swirling mellotrons. The album also showcases the band’s ability to deliver punchy raw rock on tracks like “Trolls” and “Carnival Barker.” Throughout the album, Peters’s voice is lush and blissful as never before, dominating the mix and commanding the listener’s attention to every word. And that’s the point: these are big songs, full of weight and meaning, demanding to be heard – and Peters makes the listener feel every syllable.

Over the years, Peters has gotten comparisons to songwriters like Suzanne Vega, Beth Orton, Aimee Mann, Josh Ritter, and others. Rootsville called her “a true poet and a brilliant songwriter,” while No Depression praised her “metaphor-rich songs” and “the depth and substance of her skillfully-crafted lyrics.” The Dallas Observer called her “the best kind of singer-songwriter.” Peters has released 11 albums and has played over 1000 shows in 11 countries as an independent artist. She has been crowdfunding her albums for over a decade, long before Kickstarter ever existed. She was nominated as Best Folk Artist by the Dallas Observer. The Ft. Worth Star-Telegram praised her most recent release, The Burden of Unshakeable Proof, for its “10 gorgeously-sculpted tracks, a blissful shuffling of folk, pop, and jazz bound together by Peters’s peerless voice.” Peters spent 2016 and 2017 touring the US and Europe with her band, while The Burden of Unshakeable Proof received airplay on over 100 different AAA, college, and public radio stations across the country. The album was found on a number of “best of” lists at year’s end, including No Depression’s “Alt-Country and Beyond” list.

In early 2018, Peters performed solo at 30A Songwriters Festival, and she has opened for artists like John Oates, 10,000 Maniacs, Horse Feathers, and Griffin House. Peters plans to tour – both solo and with her band – in support of Foxhole Prayers, both in the United States and abroad. Confirmed tour dates are listed here: tour schedule.

In “Foxhole Prayers,” Vanessa Peters’s already-considerable songwriting prowess has risen to its fullest stature, presented as a concise, gut-punching collection of songs composed of piercing observations of both the outside and inside worlds. 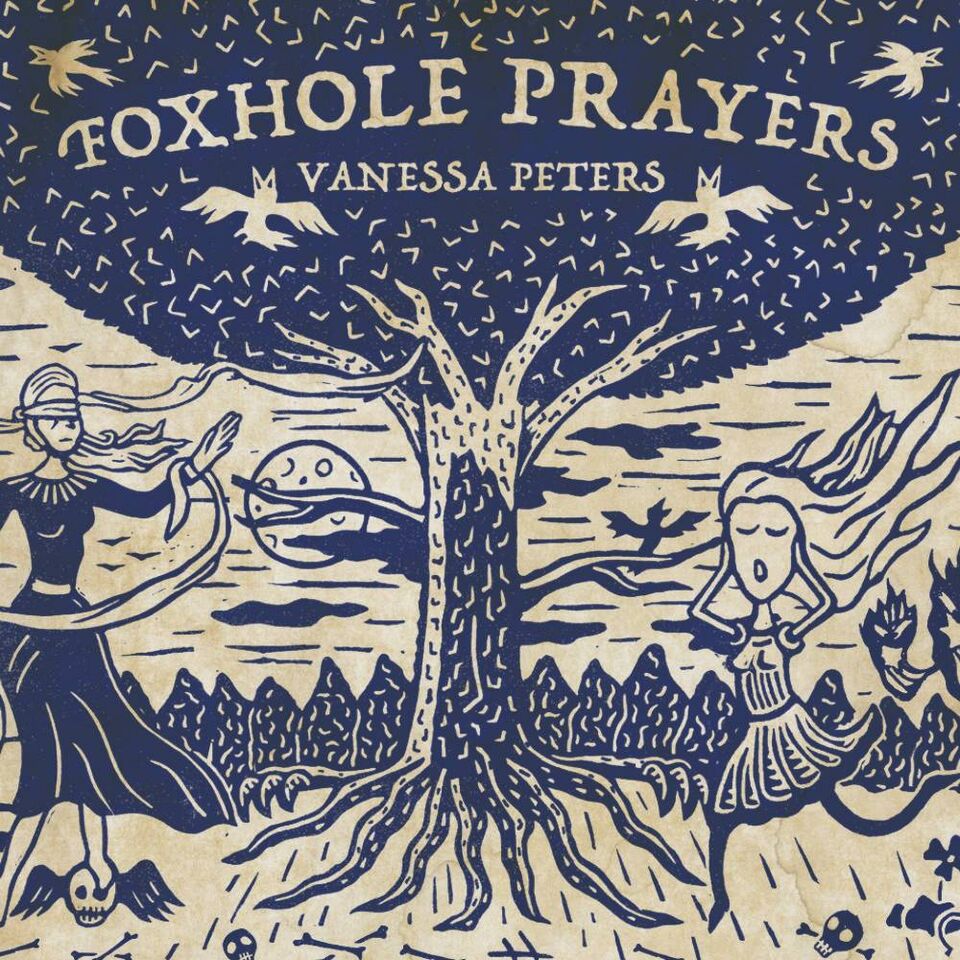