Its release coincides with the arrival of the new Mic Room microphone-modeling app for iPhone and iPad. This revolutionary new app provides a massive collection of meticulously modeled microphones that musicians can use to color the sound of their iRig Mic Studio. With everything from ribbons to condensers to dynamics, it’s a treasure chest full of virtual versions of some of the most timeless microphone designs of all time.

Superior portable performance
iRig Mic Studio has been created to provide the best sound quality possible in every recording situation. It features a large 1” diameter back electret condenser capsule, a 24-bit audiophile-grade A/D converter (with 44.1/48 kHz sample rate) and a built-in low-noise high-definition preamp. These, combined with its 133dB SPL rating, allow for optimal audio capture at any sound pressure level — it can record everything from the subtle and nuanced dynamics of the human voice to the full-on bombast of an amplified electric guitar, and everything in between.

And while these features are excellent on their own, what’s truly remarkable about iRig Mic Studio is that it fits its components into a compact enclosure so small that it makes other microphones seem supersized and cumbersome by comparison.

Comprehensive control
In addition to its high-end components, iRig Mic Studio also sports a comprehensive set of monitoring and level control features. It comes with a gain control knob and a multicolor LED level indicator that allow for on-the-spot adjustment. It also has a headphone output jack with its own level control for monitoring directly from the microphone itself. For better positioning while recording, iRig Mic Studio comes with a sturdy and portable tabletop tripod stand. And for improved portability, it comes with its own protective travel pouch.

It’s all about the connections
iRig Mic Studio is compatible with nearly every popular mobile and desktop platform. It comes with a female micro-USB port and an assortment of cables: Micro-USB to Lightning for iPhone, iPad and iPod touch; micro-USB to micro-USB OTG for Android (requires either an Android 5 or Samsung Professional Audio device); and micro-USB to USB for Mac and PC.

A world of professional microphones
Though iRig Mic Studio sounds great on its own, its tonal character can also be customized thanks to IK’s new Mic Room app for iPhone, iPad and iPod touch. Mic Room is a microphone-modeling app that works seamlessly with iRig Mic Studio to give it the sonic characteristics of some of the most famous microphones in history: tried-and-true dynamics, velvety tube condensers, smooth ribbons and a whole lot more. Now producers, musicians, podcasters and anyone else who wants great sound on the go can have access to an all-in-one microphone that can mimic a full treasure trove of classics.

The Mic Room App is available from the App Store at www.appstore.com/microom

Record with the power of apps
For immediate recording, iRig Mic Studio comes with a powerful suite of vocal apps. VocaLive™ is an expandable, powerful effects processor and multi-track recording app that’s perfect for professional singers. EZ Voice™ for iPhone, iPad and iPod touch and EZ Voice™ for Android are streamlined and easy-to-use sing-along apps that make it easy for vocalists to practice with any song in their music library. iRig® Recorder for iPhone, iPad and iPod touch and iRig® Recorder for Android are straightforward audio capture apps that are great for everyone from journalists who need to make recordings in the field to podcasters who want to broadcast while on the go, and everyone in between.

The VocaLive App is available from the App Store at www.appstore.com/vocalive

The EZ Voice App is available from the App Store at www.appstore.com/ezvoice

The iRig Recorder App is available from the App Store at www.appstore.com/irigrecorder

Pricing and availability
iRig Mic Studio comes in silver or black and is available now from music and electronics retailers worldwide, and from the IK online store, for only $/€179.99 (excluding taxes).

To see the official video of iRig Mic Studio in action: 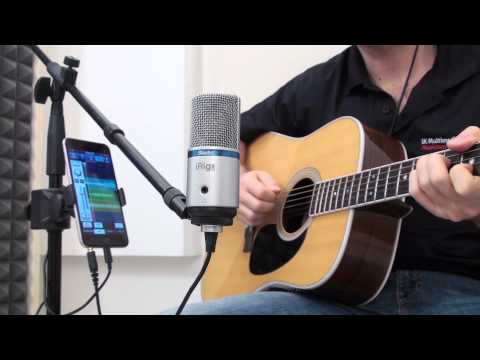