August 4, 2015 – IK Multimedia is proud to announce T-RackS® Stealth Limiter, a new ultra-transparent mastering peak limiter available now in the T-RackS Custom Shop. A versatile secret weapon of a mixing and mastering tool, it allows producers, engineers and musicians to turn up the loudness of a mix while still maintaining a clean sound with plenty of dynamic range and sonic breathing room.

Sonic integrity at higher dBs — Dynamic, transparent and loud
T-RackS Stealth Limiter is a new kind of processor for the final peak limiting stage of the mastering process. The past few decades have seen volume levels of produced audio rise at an alarming rate. Loudness of mixed and mastered audio material has become a de-facto standard for contemporary music production.

To achieve a level of competitive loudness, producers and engineers have had to employ methods of extreme compression and limiting to make their mixes louder, which also may have caused residual distortion, sonic “flatness” and a loss of overall emotion in those final mixes. T-RackS Stealth Limiter has been designed to prevent the ill effects of extreme compression and limiting by retaining sonic clarity and dynamics, while achieving the desired loudness level — something that other limiters and compressors just can’t do.

A stealth weapon
An impressive increase in loudness without the discernible effects of compression — it’s a dream come true. Simply put: T-RackS Stealth Limiter is the most transparent, clear and loud, software peak limiter available for mastering, and it’s able to provide this thanks to its smart level-tracking algorithm. It works like a sonic ninja, reducing levels below the volume ceiling moment-to-moment, instead of applying the traditional style of look ahead, envelope-based fast-attack compression. It doesn’t sound like a compressor, and that’s because it isn’t one.

Inter-sample algorithm
The secret to T-RackS Stealth Limiter’s invisibility is in its inter-sample peak-limiting algorithm. This works differently than traditional mastering processes, which suppress spikes above the volume ceiling by employing hard limiters or clippers. These traditional processes are only able to ensure a stable digital level; they don’t guarantee undistorted playback once the music goes through conversion, which can create an analog waveform that exceeds the threshold and introduces unwanted distortion.

T-RackS Stealth Limiter’s inter-sample peak limiting algorithm gets around this by predicting the converted analog waveform of the digital source. It ensures that the final converted audio will only very rarely exceed the set ceiling. The result? All the loudness, but without a perceptible loss in dynamic range. This is particularly useful considering that modern music is heard on different devices and services that utilize compressed formats like MP3 and AAC.

Easy-to-use and extremely versatile
T-RackS Stealth Limiter sports straightforward controls and intuitive features that make using it a quick and easy process. Its input knob can be used to set the desired loudness, and its output ceiling knob can be used to adjust the output level. And, for more advanced uses, it comes with 4 different modes of operation for fine-tuning.

The basic mode is TIGHT. This offers neutral limiting that respects the natural sonic dynamics of the source material as it increases loudness. The BALANCED mode offers a similar level of transparency, albeit while introducing a subtle amount of dynamic compression. HARMONICS 1 can be used when a bit more color is required. When used, it imparts a sense of dimension and pleasant coloration that can make a mix sound and feel more analog. And finally, HARMONICS 2 can be utilized when more sonic character is desired. It can deliver a thorough boost of gritty and punchy analog character.

In addition to its various modes, T-RackS Stealth Limiter also comes equipped with an infrasonic filter that can be used to cut out unwanted sub-bass frequencies that might otherwise put excessive workload on the limiter.

Easy monitoring is provided via its on-board unity gain monitoring function, which allows for a quick comparison between the processed audio with or without the accompanying volume boost.

T-RackS Custom Shop — A one-stop studio shop
The T-RackS Custom Shop for Mac/PC is a free DAW plug-in and standalone app that gives producers, engineers and musicians 24/7 access to some of the most sought-after studio production gear of all time. Once installed, its huge collection of high-quality processing plug-ins for mixing and mastering can be browsed, auditioned and purchased. Each model can be tested as a fully functional demo for a period of 14 days. Gear can be purchased individually or as bundles in either currency ($ or €) or in Custom Shop Gear Credits.

For more information and to hear audio comparisons, please visit:

To download a free version of the T-RackS Custom Shop, please visit: 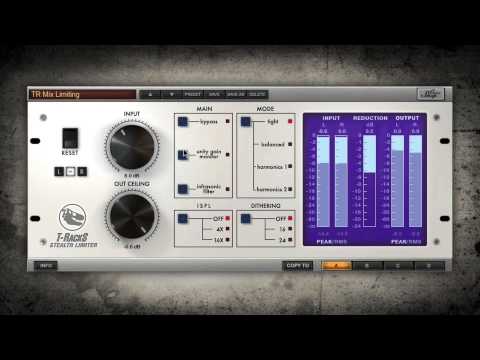