Home News GRAMMY-Winning Guitarist Sharon Isbin Will Be The Subject of a Documentary, To...

“She has broken every glass ceiling for guitar and for women in her field.”

Via Press Release:  With the release of her new documentary and a box set of five of her most popular albums, 2014 is ramping up to be an exciting year for Sharon Isbin, “the pre-eminent guitarist of our time” (Boston Magazine) and winner of multiple GRAMMY awards. “Sharon Isbin: Troubadour,” a one-hour documentary presented by American Public Television, will air on nearly 200 public television stations this November-December and be released on DVD/Blu-ray by Video Artists International. It paints the portrait of a trailblazing performer and teacher who over the course of her career has broken through numerous barriers to rise to the top of a traditionally male-dominated field. 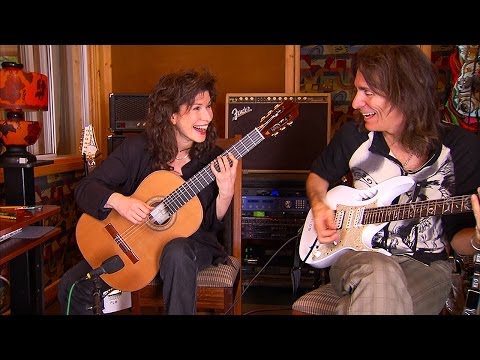 In coordination with the documentary broadcasts, Warner Classics will release a box set of five of Isbin’s most popular albums on October 14. The collection brings together cornerstones of the guitar concerto repertoire by Rodrigo and Villa-Lobos performed with the New York Philharmonic; arrangements of perennial Baroque favorites; music from South America with organic Brazilian percussion and guest Paul Winter; two GRAMMY Award-winning discs: concerti by Christopher Rouse and Tan Dun (written for Isbin and featured in the documentary), and her imaginatively-programmed solo disc ‘Dreams of a World.’ More info: http://bit.ly/1v3K9BM

Isbin will also embark on a US tour this November that will demonstrate her “jaw-dropping technique and lyrical interpretations [that] have helped bring the guitar into the classical mainstream” (Washington Post), reaffirming her position as “one of the best guitarists in the world” (Boston Globe). Tour dates: http://bit.ly/1s6nv9r